A Greek Revival townhouse in the West End.

1857 Map of Cumberland County with the Hamblen farm in Gorham noted. Library of Congress

The Hamblen, or Hamlen, Hamblin & Hamlin, family arrived in Gorham, then the Narragansett Grant, in the mid 18th century. By the time the map above was printed, they had been farming there for a century.  They still farm there today. Around 1825, 3 Hamblens, Eli, Nathaniel, & William, moved to Portland. Eli and Nathaniel were painters by trade and William was a mason. They may have been brothers or cousins. The history is not clear. And although the historical documents attach Eli and Nathaniel’s names to the block and not William’s, I think we can be somewhat confident that William was involved given the substantial amount of brick used.

The brothers built, in a short period of time, a block of 2 three-story townhouses in a relatively severe Greek Revival style. Each unit is 23′ wide and 33′ deep with a 12′ x 32′ ell extending off the back. The block sits on a very high basement increasing the impression of height. The windows are quite deep on the first floor with a dramatic decrease in size on the second floor. Even smaller units light the 3rd story. This arrangement of decreasing window sizes was a hallmark of the then-waning Federal Style. What is confusing is the second-story window on the north side of the house is the same size as the first-story windows. 198 has the smaller second-story window on its south wall. Very odd.

Eli Hamblen purchased the lot for 196 & 198 from Alfred and Sarah Dow in July of 1836. Sarah had inherited the land after the death of her father, James Neal, in 1833. It was Eli’s second purchase from the Dows. He purchased the block for 188-194 Danforth in 1835. Little time was spared in completing 196 & 198 as our subject was sold to a local, and early, real estate trader named John Proctor in early May of 1837. The house was probably still under construction when Proctor bought it as it was another 3 months before he sold it. The purchaser was a merchant named Joseph Bradbury. Bradbury sold it to Andrew Dole in early 1839. Dole sold it to the Bank of Cumberland in the same year. The bank held ownership of the house until 1844 when it was sold at auction to Joseph Small who sold it to George Turner the next day. Turner was a merchant who lived on India Street. He kept a store on Fore Street along with a wharf on Clay Cove. Turner sold it to a shipmaster named John D Blanchard. In 1847, Blanchard, having moved to Newton Mass the previous year, sold 196, then 78, Danforth Street to Nehemia C Rice. Got all that? Nehemiah Cram Rice was born in Tamworth New Hampshire in 1802. He married Pheobe Tyler of Brownfield Maine in February of 1829. At some point, Pheobe’s elder brother Samuel and Nehemiah formed a partnership trading in cattle hides and leathers. When the partners moved to Portland is a bit unclear. Nehemiah’s deed from Blanchard states Rice was living in Portland but he is not listed in the city directory for that year. There are currently no Portland directories online for the years 1848 & 1849. The 1850 directory does not list Nehemiah but does have Samuel Tyler at the Casco House Hotel. The Rice family was in Portland in1850 in time for the census as they were enumerated as such. They had 2 children, Sarah and Nehemiah Jr. Pheobe’s mother Sarah was living with them as well. By 1852, the firm of Tyler, Rice & Sons was operating on Union Street.

Tyler, Rice & Sons was successful and grew to a point that, by the mid-1850s, they moved onto their own wharf near the gas works at the foot of Clark Street. It must not have been a large wharf as it does not appear on any charts of the harbor for the period. In 1865 the company moved to Congress Street in Boston. In early 1866, the company dissolved and Nehemiah Jr. started a new firm in Boston under the name of N. W. Rice and Co. Nehemiah the elder acted as an agent in Portland.

Pheobe Tyler Rice died of consumption on August 8, 1860. She was 56 years old. Nehemiah died in July of 1881. He left no will. At that time, their daughter Sarah was living at 196 Danforth. Ownership was shared between Sarah and Nehemiah but Nehemiah soon ‘gifted’ his share to Sarah. This action was never recorded at the registry of deeds. Sarah moved to Boston soon after her father’s death as she is not listed in the city directory for or after 1883.  In 1883, a cotton merchant named William Martin was living in our subject. In 1884, the Spanish Consul for Portland, Enrique Ainz, moved in. Ainz had been appointed to the position in 1862. He and his wife remained in our subject until his death in 1888. In 1890, a jeweler named George H Griffen moved in.

George H Griffen and his wife Louisa were born in Massachusetts. They had 2 daughters, Elsie & Louis. The girls married in 1913 and 1914 respectively after which George and Lousia moved to Belmont Mass. Sarah Rice died in 1914. All of these events led to 196 Danforth Street being empty until 1919. By then even Nehemiah the younger was dead so it was left to his children to clean the situation up. Through a pair of deeds, the issues were enumerated and the property was sold to a traveling paper salesman named Samuel W Shaw. Shaw and his family lived at 190 Danforth when they purchased 196 and had moved in by early 1920. The Shaws lived here until it was foreclosed on in 1930. It was purchased from the bank by a millworker named Charles M Emery. Charles and Ada Emery were both from Bangor. They had 3 daughters, Doris, Eela, & Shirley. They lived at 196 Danforth until 1942 when they sold and moved to Southern California. The property had four different owners over the next 5 years before being bought in late 1947 by Joseph and Eva Lacroix.

The portico for 196-198 Danforth is undoubtedly a later installation. The brackets supporting the hood were not in style in the 1830s nor was the extravagant cornice. The far simpler porticos seen on 188-194 Danforth are original and, as that block was built by the Hamblens as well, more likely to represent what was here before. 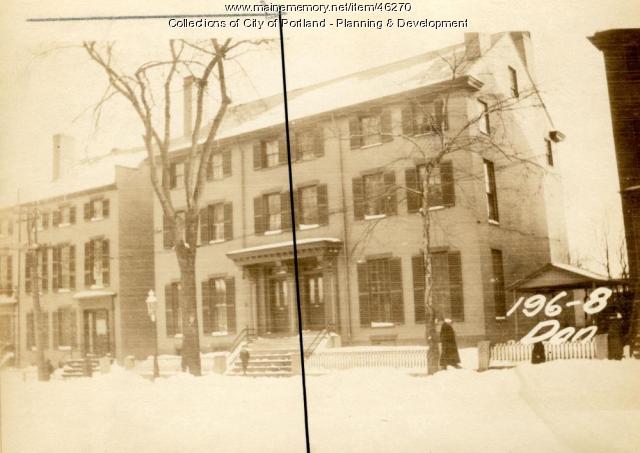 Joseph Lacroix was born in Gorham New Hampshire in 1888. Eva was born in Francistown New Hampshire in 1896. They married in 1920 and had a daughter, Theresa, in 1925.  During their time at 196 Danforth St, they took various lodgers, mostly retirees, and nurses.  Joseph worked various odd jobs and Eva worked in different roles for the Burrows Company on Free Street. Joseph died in 1977. That same year, Eva and Theresa sold the property to a Robert Lord. Lord sold it the following year to Josephine Mussomeli. Josephine and William Gaynor lived there until they sold it to the current owners in 1991

196 Danforth Street on the Sanborn Insurance map of 1886. Library of Congress.

196 Danforth Street on the Goodwin Street map of 1882. Library of Congress

196 Danforth Street is listed as a 3 family home. Condition is fair.