(Author’s Note: This article is derived from a project I recently did with Greater Portland Landmarks to prepare a historic marker and a storybook of the history of the building. My thanks to Landmarks for allowing me to revise this work for the article you are now reading.) 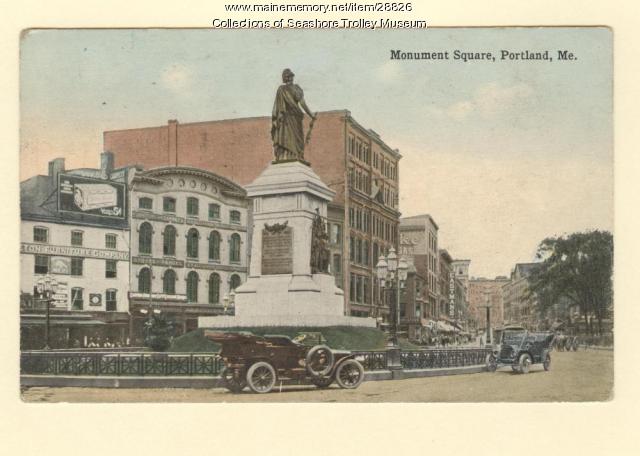 22 Monument Square was originally 2 buildings encompassing 22 through 26. 22 was the lower, hipped roof building and 24 was the 4 story building with the arched cornice to the left of the Soldiers and Sailors Monument in the image above. Based on the period, details, and a whole bunch of gut feelings, I believe the building at 24 was designed by Charles A Alexander. Baxter purchased 24 Monument in 1871 and 22 Monument in 1907. 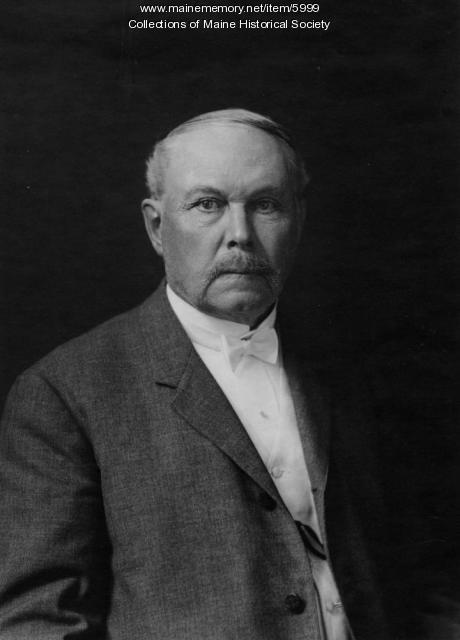 James Phinney Baxter was a successful businessman and politician who donated the public library on Congress Street that is now home to The Via Agency. Baxter Boulevard, which he championed was named in his honor. He had 11 children with 2 wives a couple of which we have encountered in other articles. Percival Baxter would be the most well-known of James’ children and he would own and have an office in the new building for almost 4 decades.

A.R. Alexander and Elias Hersey were the last tenants of the old 22 Monument Square. They moved to Center Street and did not return. After construction, the upper floors would no longer be semi-industrial but would be strictly offices. The only tenant listed in 1913 was the Union Cigar Shop which would imply that the street level was somewhat usable during construction.

The 1913 construction involved adding 2 more floors, creating a new facade, and updating systems including the addition of an elevator and sprinkler system. In hiring Stevens, Baxter went with the city’s most prominent architect. Stevens had just completed the renovations on 20 Monument Square for the Donahue family the year before. 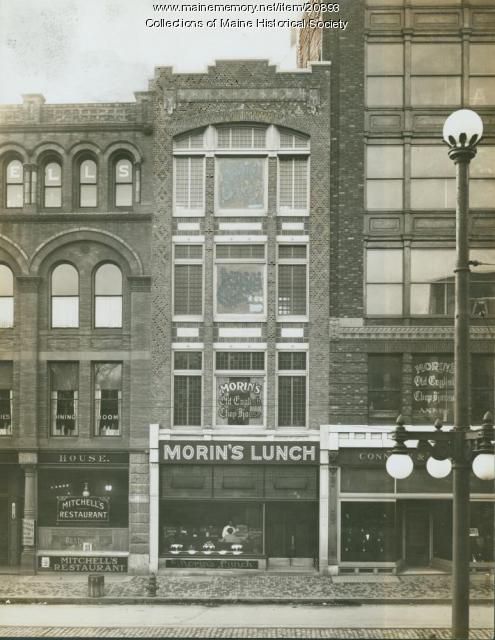 For inspiration, John Calvin Stevens looked west to Chicago. There, a style of commercial architecture was being developed that emphasized the verticality of a structure. This ‘Chicago’ or ‘Commercial’ style also promoted the ‘tripartite’ concept of a building’s facade as the three units of a column. These being the base, usually the lower 2 levels, shaft or main body of the building, and capital or cornice. Windows were grouped, usually 3 to a unit, and were often held back from the face of the building in order to emphasize the vertical elements. Overall ornamentation was minimized although, as in 22 Monument Square, rich bands of glazed terra-cotta were often used on the lower levels and at the cornice.

Cast-iron had fallen out of favor to a great extent by 1913 so the amount used on 22 Monument Square is unique. The street level is of cast iron with the entrance showing great detail. Above this is a granite lintel with a heavy dentil detail. The use of granite in storefront lintels has a long history in Portland going back to the 1820s. The upper levels are divided by brick piers. The second level has 2 windows in the middle bay with three windows in the outer bays. The second story is capped by a band of terra-cotta. The upper 4 levels have 3 window bays of 3 windows each. The window bands are divided by cast-iron spandrels that integrate the pilasters that divide the window units. The windows of the outer bays are often called ‘Chicago Windows’ and provided a large amount of glass area. The cornice is richly overlaid with terra-cotta of various shapes and forms.

As noted, probably the best known early tenant, and owner, of our subject was Percival Proctor Baxter. Percy served in the Maine House and Senate and was Governor from 1921 to 1925. His philanthropy and concern for the state were all-encompassing with his purchase and donation of what is now Baxter State Park being his greatest legacy. He acquired 22 Monument Square from his father in 1917. He kept an office on the 6th floor until 1944 when he sold the property to the Congress Realty Company. Baxter moved to the Trelawny Building at 655 Congress Street. James Phinney Baxter also kept an office on the 6th floor of 22 Monument Square until his death in 1921. 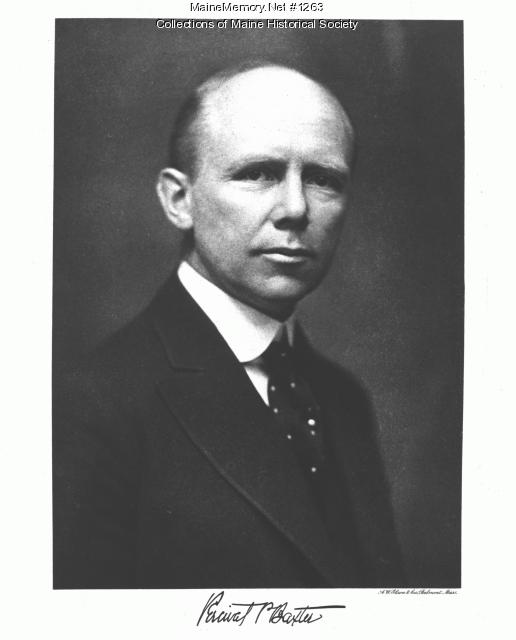 In its first years after the renovations, 22 Monument Square was known as the ‘Press Building’ as its primary tenant was the Portland Daily Press. The paper’s main office and editorial staff were located here. The Press also ran an office of the Postal Telegraph and Cable Company, a predecessor of Western Union, from the building. The Daily Press became the Evening News in 1928 and the building’s name changed to follow. Even after the Evening News moved out in the early ’40s, the name stuck.

After purchasing 22 Monument Square from Percival Baxter in 1944, Congress Realty sold it to Ann Gordon, Ida Gordon, & Marcia Oransky. All three women’s families ran various businesses in the city with Ann and Abraham Gordon operating the Portland Mens Store at 28 Monument Square in 1944. This group retained ownership until they sold it to the Dartmouth Realty Company in 1969.

In 1974, the Chorney family of Portland purchased the building. Charley and Bea Chorney ran ‘Charlie’s on the Square’ at #23 for over 3 decades. The Chorneys sold 22 Monument Square to a limited partnership in 1982. 1982 was a low-point in some ways for the building with the city directory for that year showing some 75% of the offices being vacant. In 1986 the building changed hands again with the new owner taking a mortgage which was foreclosed on in 1990. The property remained under bank ownership until 1992.

Although the list of tenants of 22 Monument Square would vary widely over the years, it remained popular with small insurance agencies and real estate agents. The names of many different companies of these two business types would make up the majority of the listings in the city directory. Although most were small and fleeting, a couple were notable. They included St Paul Fire and Marine Insurance which became Travelers, Hartford, Commonwealth Insurance, and The Atlas Assurance Co of London

Some of the more interesting tenants over the decades include:

22 Monument Square is listed as a commercial building. it is in excellent condition.