A Mansard roofed Italianate in the West End.

Symmetry and balance are common terms in architecture. Their meanings are subject to endless debates and, most likely, always will be. Here on 46 West Street, Moses Merrill chose to ignore them both. We will get into the details further on.

Moses Merrill purchased the land for our subject from the Hatch family and Charles Schumacher in September of 1876. He paid $1500 for the lot which was financed through a mortgage taken with the Maine Savings Bank. The loan was for 3 years at 7% interest. It was discharged in March of 1880. In October of 1876, Merrill took a 6-month loan from Charles Schumacher for $750. It was paid off in March of 1877.  Merrill then took a loan for $1200 from Maine Savings Bank in March of 1877. This was for 5 years at 7% and was paid off in March of 1883. Moses was listed in the city directories as a joiner who lived on Clark Steet for several years before building the house at 46 West. He was born in Brownfield in 1827 and married Elizabeth Washburn in 1851. They had no children. They sold the house and land in May of 1879. 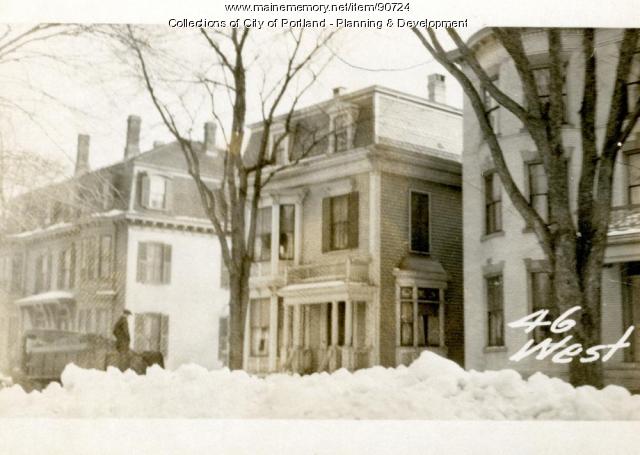 The house is a set of rectangles running perpendicular to West Street. The main block is 25′ on the street and extends 31′ back. There is a 20′ x 22′ ell extending from the right rear of the main building and a two-story porch at the rear of the ell. The details are somewhat restrained. The stacked bay and entry arrangement is the ‘East Ender’ treatment we have seen before but the porch is unique and, to be honest, not well scaled to the building.  The extra width leaves a small gap between the porch and bay that, along with other issues, throws the balance of the facade off.

Moses Merrill sold 46 West Street to Charles AB Morse in May of 1879. Morse was a native of Massachusetts. He married Mary Chase of Brunswick in 1848. Morse was a dealer in lime, gypsum, and plaster on Commercial Street for many years.  The Morses had 6 children, 3 dying before the age of 5. Mary died in 1883 and Charles in 1886. After his death, the West Street homeownership was divided among the surviving children, Charles, James, and Albertina (Allie).

By 1900 Allie and James Morse had deeded their shares of 46 West Street to Charles and Jennie Morse. The couple had married in 1881 in Vermont where she was from. They had 2 daughters, Mary, and Lillian. Charles was a bookkeeper for various firms including his father’s. Charles died in 1918 at the age of 64. Jennie remained at 46 West until her death in 1940. Lillian and Mary acquired the property through Jennie’s will at which time Lillian transferred her share to Mary. After Mary’s death in 1958, the property passed back to Lillian and Mary’s husband, John. They sold it that same year to a maintenance man for the Eastland Hotel named Keith Savage. The Savage family owned 46 West Street until the mid-1980s.

The northwest side of our subject has some interesting features, and something of a ‘ghost’ as well. The oriel window is a nice feature and well detailed but I have to wonder how much more light it beings into the room. Likewise for the subtle bulge in the wall a little further back. Things may have been different prior to the 4 story brick block being built next door. Above the oriel the ghost of a tall window that was removed after 1924 as it is in that photo. Seems odd that the window was removed but its frame was left behind. Not quite a ‘remuddle’ but worthy of a head scratch or two.

Now, about that facade. Moses Merrill did a good job of stacking the elements of the facade into two bays. The right bay, with the porch, is well placed and, other than the porch being too wide, is all well and good. It’s the positioning of the left bay that’s off. You can see it in the dormer. It, and the bay windows below it, should be a foot or two farther to the left. This would bring it into the center of its bay and bring the facade, mostly, back into balance. It’s a shame that the gutter downspout had to be placed where it is. It only exacerbates the balance issue.

46 West Street is currently listed as a 3 family building. The condition is good.