The farmhouses of the early 19th century that dot the New England landscape speak of a hopeful but uncertain time. It was a new nation in a new century and it called for new ideas. And yet there were unresolved issues after the revolution. The British may have been driven out of the United States but they were still in North America and they were not being the best of neighbors. 672 Ocean Avenue reflects these hopes and issues in its blend of stylistic elements and unresolved build date.

The Sawyer family farmed the land since the mid-1700s. Nathan’s father, Zachariah, acquired it from his father, Anthony, in 1792. The deed for Anthony’s transfer to Zachariah does not note how he got it. Zachariah transferred a little over an acre of the property to Nathan in 1804. The deed specified that Nathan could not sell the property without his father and mother’s permission. In 1814 Zachariah transferred a 20+ acre block of land to Nathan. it included “his dwelling house thereon”. Oddly, the latter transfer was not recorded in the registry of deeds until 1837. It is only with a reading of the actual deed that I discovered the dating issue. 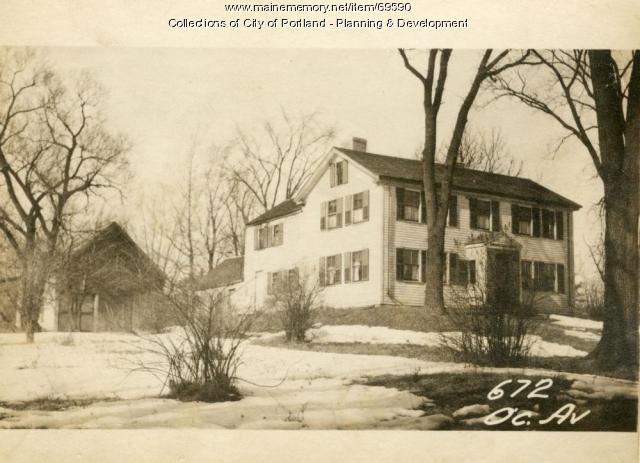 Measuring 37″ long and 20″ deep, the main block is a good-sized mass that is tall in the Georgian manner. But the depth is more ‘modern’. The windows of the sidewalls show a typical Georgian arrangement that is more scaled to a shallower house. The ell is 18′ x 30′. There is a 19′ x 22′ structure connecting with the barn.

The Northern foundation of fieldstone.

The Southern foundation of granite slabs.

The north and south end walls today show different materials in their foundation materials. The north wall shows fieldstone laid in a traditional manner. On the south wall, we see granite slabs set on end, a method that became popular in the 19th century as the quarried stone was increasingly available. This may hint at an earlier structure on the north side. It is more likely that the entire foundation was originally made of fieldstone and the south side was changed at some point. The tax photo of 1924 does not show the foundation so we cannot see what the material was at the time but it does show that the grade on the south side has changed substantially. Perhaps this was when it was changed.

As is often the case, finding online information for people who did not live in Portland in the late 18th and early 19th century is difficult if not nearly impossible. Nathan Sawyer is no exception to that rule. He appears in the 1820 and 1830 census but those only counted people in the home. He does not appear in any city directories. I believe he died in 1841 based on a scanty record at FindAGrave but I cannot confirm that. What can be confirmed is in 1852, his son John S sold half of the property to James Knight who was already farming there. John Sawyer lived there as well. He and James continued to farm the land through the end of the century although at some point James Knight deeded his share back to John Swayer. John deeded the entire property to his wife Sarah in 1898. Sarah sold it to Jessie Wright in 1910.

The primary facade again shows a blending of stylistic elements. The proportions are Georgian as is the entry. The windows are Georgian in size but Federal in spacing and detail. The lack of any exterior decoration at all is another element from the earlier style.  It stands tall above the current street level in a ‘Federal’ manner but there is nothing to say that the level of the street hasn’t changed. 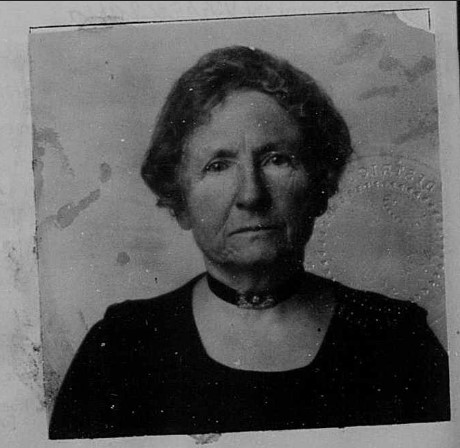 Jessie Dillenback was born in Orleans New York, on the northeast shore of Lake Ontario, in 1859. In 1879 she married Augustus Ryker Wright of Seneca New York. Augustus was 36 years old and a successful canal and railroad builder who had ventured into buying, selling, and transporting coal. In the 1880s the Wrights moved to Portland and purchased a house, since destroyed, on Carelton Street in 1887. 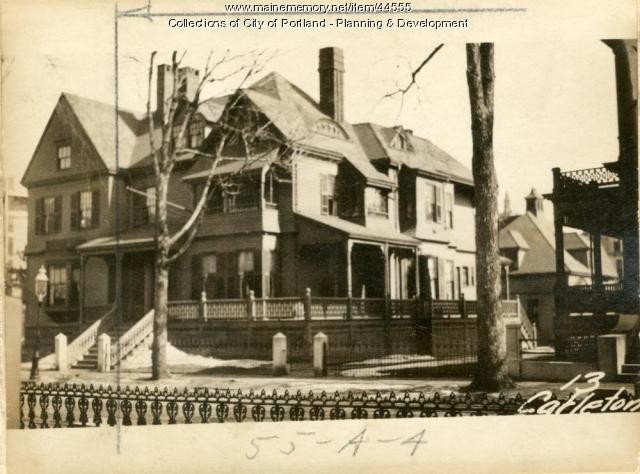 13-17 Carelton Street was still owned and occupied by Jessie Wright in 1924.

Augustus and Jessie Wright had 3 daughters, Eleanor, Esther, & Dorothy, during the decade of the 1880s,  Augustus died of ‘apoplexy’ on March 30 of 1900. He was 57 years old. His will provided for generous lifetime annuities for his mother and siblings. The remainder of his estate, including the AR Wright Company, was bequeathed to Jessie and the girls. 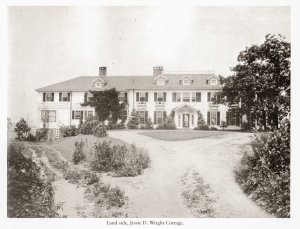 In 1914 Jessie Wright purchased 30 acres of land bordering the Alewife Brook on the north shore of Cape Elizabeth. She hired Portland’s most esteemed architect, John Calvin Stevens to design a ‘cottage’ for Jessie and her family. It was a substantial building as can be seen from the images. It is still there and still in the family as is most of the estate to this day. It is of special interest to your author as I grew up nearby and several generations of family members on my mother’s side were caretakers of the property.

Jessie Wright owned 672 Ocean Avenue until 1936. She rented the property during the period. John and Edit Russell lived here from the period of WWI until the late 20s. John was a native of New Hampshire who worked as a clerk in several wholesale businesses in the city. John married Eva Littlefield in Portland in 1893. They had 2 children before Eva died of pneumonia in 1903. John then married Edith Larrabee in 1904. They were married in April and their first child, Carl was born in August. They had 3 more children by 1910. The Russells moved to Sherwood Street in 1928.

After the Russells left 672 Ocean Street, Jessie Wright’s nephew, Alvah Dillenback II, moved in. He was working for AR Wright at the time. Alvah and Eugenie Dillenback and 2 sons. Jessie transferred the property to the Dillenbacks in 1936. She died in 1938. The Dillenbacks sold the property to a physician named Harry E Christensen and his wife Grace in 1946. The Christensens sold to Howard P Sawyer Sr. of Brookfield NH in 1956. His heirs sold it in 1966.

672 is listed as a single-family home. The condition is very good.