An odd brick Italianate in the West End.

Which came first? 77_79 Carleton or 73_75 Carleton? The entry for 77_79 is quite narrow and deep. With it sitting ‘cheek by jowl’ with the sidewall of 73_75, it has a cave-like appearance. The deed history for both lots would suggest that 77_79 Carleton was there first but it was by no more than a year or so. Even if there was no house next door when it was built, it does seem like a surprisingly small entrance. Hmmm.

We have met the Chase brothers before. The house they built for Charles Green was a bit more cohesive in design and detail than our subject which is odd as it was earlier. Perhaps it was designed by someone else. Here on Carleton, they built a brick block measuring 28′ on the street and 45′ deep. There is a single-story, wooden, ell measuring 7′ deep and 16′ wide at the rear. The house consumes most of its lot. Along with the aforementioned lack of gap with 73-75, there is a mere 8′ between our subject and #83 Carleton. The property has a decent-sized rear yard which is accessible via a right of way from Brackett Street. 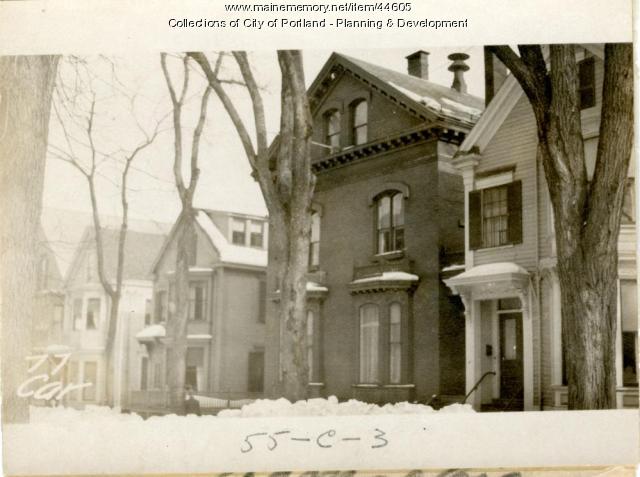 Sewall Chase was born in Paris Maine in 1807. Sewall was in Portland by 1834 when he first appeared in a city directory. He had married Mary Ann Trowbridge of Portland in 1833. The 1834 directory lists Sewall living on Jefferson Street with Timothy Chase who was his father. Both were listed as masons. By 1850, Sewall and Mary had 4 children. Sewall gave the value of his real estate holdings as a not insignificant sum of $1500.00. The census also listed 2 apprentices and 2 domestics living with the family. The family house on Brackett Street must have been crowded.

The street facade begins with a pair of very tall bay windows on the first floor that don’t seem to get along with the body of the house. Although they might appear to be original, they have an ‘added-on’ feel and the masonry isn’t quite right. More on this below. Above the bays are paired windows in simple openings. They are topped with compressed arches and very heavy brick hoods that seem to be trying to crush the windows below them. 3 courses of corbeled brick define the bottom of the empty frieze. The pediment is closed and very deep and surrounded by hefty modillions. The closed pediment contains a pair of single windows with even heavier hoods.

When the 1860 census came up, the Chases had a 5th child. The 2 domestics who were with them in 1850 were still there. 2 new apprentices lived with the family on Carleton Street. In 1863, the eldest of Sewall and Mary Ann’s sons, William, sold 77-79 Carleton to the cashier for the First National Bank named William E Gould. How William Chase acquired the title to our subject isn’t clear. Sewall had taken a mortgage from William for $9500 in January of 1860 but that was noted as discharged within 6 months of being issued. The deed from Chase to Gould has no reference to how William Chase got possession but possess it he did.

William Gould was born in Portland in 1837. He was named after his father who was also a bank cashier in the city. He married Emma Dow, the daughter of Neal Dow, in 1859. The Goulds lived at 77-79 Carleton Street until 1871. During that time, they had 3 children, two of which died before the age of 1. In 1870, William sold our subject to St John Smith. 9 months later, Smith sold it to a merchant named Charles Meserve. Meserve lived here until the summer of 1873 when he sold to a mariner from Yarmouth named Franklin Knight. Frank and Abbie Knight were married in Yarmouth in 1860. They had 2 sons, Francis and Frank Jr. Franklin Knight died in late 1876 or early 1877. The exact date, location, and circumstances are shrouded in history. All we have to go on are a note in the January 27 1877 edition of the Portland Daily Press noting that a Reverend J W Johnston of the Boston Highland Church would “preach the funeral sermon for the late Captain Frank Knight who died in a foreign land” at the Pine Street ME church on Sunday and Abbie’s purchase of our subject from Franks Estate in 1878.

The facade facing 83 Carleton is very clean with nothing projecting from the surface until the corbelling at the eave line. A close look at the front corner of the foundation and basement wall, seen below in detail, creates questions.

The arrows in the image above denote a vertical line in the masonry rising from the ground to the point where the painted brick stops. Behind this line, the masonry is older and rests on large blocks with one, highlighted in red, seeming to be a cornerstone made of marble. The masonry in front of the vertical line is newer and does not match the older work at all. The fact that this newer masonry stops right under the bay windows just backs up my feeling that they were added on.

By 1891, Abbie Knight had remarried and was living in Stoughton Massachusetts. She had been renting our subject to a Bowdoin College graduate, lawyer, and civil war veteran named George McQuillan for a few years by that time. 1891 was the year George married Mary F Robie of Gorham. Mary’s father, Frederick, purchased the house as a wedding gift for the couple although he held the title until his death in 1912 at which time Mary inherited it. They had one child in 1894. George died in 1914. Mary sold the house in 1915 and died the following year. 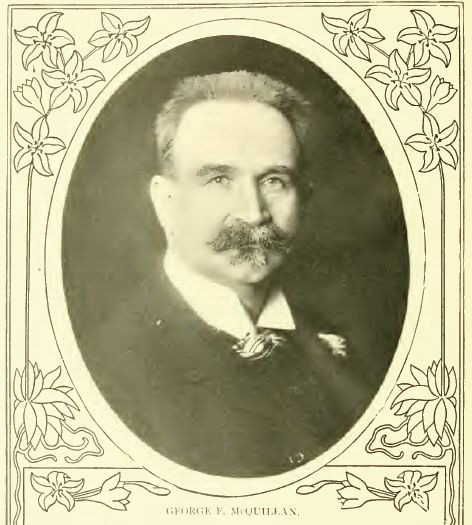 In 1915, a widow from Gorham named Anna Coffin purchased 77-79 Carelton Street from Mary McQuillan. Anna lived there until selling it in 1919. 1919 was also the only year the city directories listed anyone else living there. An osteopath named Aida Wentworth being the tenant. The deed from Anna Coffin to Jennie Stein notes Wentworth’s lease was in force until March 1 of 1920. 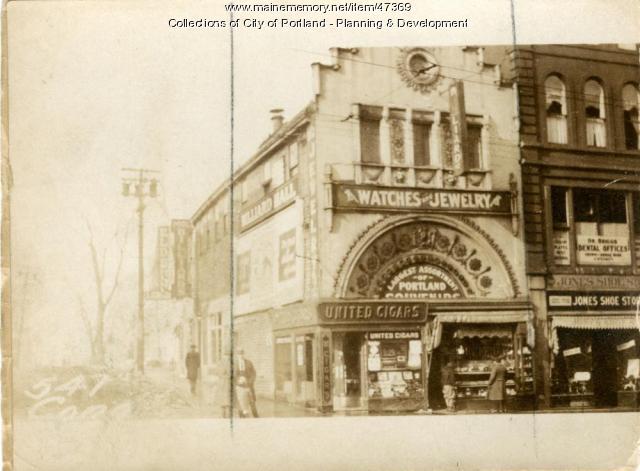 Jennie and Joseph Stein were Russian immigrants who had married in 1899 and came to the US in 1904. Joseph was a jeweler and watchmaker who ran his own store at several different locations including 551 Congress Street, seen above, which is now the home of Nosh Kitchen Bar. The Steins never lived in our subject. It was rented by various nurses and single/widowed women. In 1925, Jennie Stein sold 77-79 Carleton Street to another Russian immigrant named Bessie Goodovsky. Goodovsky sold it in 1926. The purchaser at that time was a real estate company called Clough & Maxim. It changed hands 2 more times in the next 18 months before being purchased by Mary Flint in 1928.

I have to wonder if the metalwork remaining on the bay is from signs for the various nurses who practiced from the house.

Mary Flint was born in New Hampshire in 1877. Her history isn’t clear. She married and had a daughter but who her husband was I have not determined. She first appears in Portland on the 1920 census as a widow living on Gilman Street with her daughter who was 16 years old at that point. In 1930, she was living alone in our subject and working as a bookkeeper for the railroad. She took a mortgage for $7,600 from the Federal Loan & Building Association in 1931. She defaulted in 1934 at which time the mortgage was foreclosed on.

As was often the case during the Depression, the bank held on to 77-79 Carleton Street for an extended time, 10 years, before selling it. During that time it was leased to various people and served, as noted before, as several private nurses’ offices. It was also a boarding house. The purchasers in 1944 were a real estate agent named Josephine Childs and a tailor named Oskar Eriksson. They sold it to Marion Crawford in 1945. Marion deeded the property to Nellie Crawford in 1954. The Crawford family owned it until 1965.

77-79 Carleton Street is listed as a two-family home. Condition is fair. The owners are a novelist and a screenwriter.