A small Queen Anne in the Woodfords neighborhood

Earnest Small was neither a builder nor a developer per se. He was the treasurer of the Charles Hay Paint Company on lower Free Street. Earnest was born in Massachusetts in 1872, He married Harriet Thurston, born in Portland in 1874, in Providence RI in 1897. They had 3 sons, the first dying in infancy. They lived on Pleasant Avenue next door to the former Elwell residence. Earnest dabbled in real estate here and there. He would own the building his employer’s store was in in time, but that’s another story.

Earnest Small purchased the land for our subject from a physician from Standish named William S Thompson. It’s unclear whether Small hired an architect but I am inclined to think not. The house is too ubiquitous in style to be from Tompson or Stevens. I suspect he purchased the plans and hired a local firm to build the house.

107 Beacon Street measures 32′ on the street and is 30′ deep. The bay is 4′ deep and the porch is 8′ deep by 22′ wide. There is an attached garage, a pair of ‘bump-outs on the rear, and a substantial deck. The pair of dormers leads me to believe there is living space in the garret although I cannot confirm this.

Ernest Small sold 107 Beacon, with the house, in 1912. The purchaser was a retired farmer named Charles Wetherbee. Charles and Lucy lived on Pleasant Avenue just off Forest. During their, brief, ownership, the first tenant took up residence with the 1912 city directory listing Alexander Cameron as living here. Cameron was born in Portland in 1853 to a grocer also named Alexander and his wife Harriet. He was the youngest of 3 children. He married Lucy Skillins of Deering in 1880. They had 2 children. They were only here for one year before moving to Massachusetts. In 1914, Harry Ivers, who was the general manager of the Cumberland County Power and Light Company and the Lewiston, Augusta Waterville Street Railway, moved in.

Harry B Ivers was born in Annapolis, Nova Scotia in 1878. He was the penultimate of 5 children to Hannah and Henery Ivers. Henery was a sailmaker. Harry married Minnette Stentiford in Lynn, Massachusetts in 1901. They didn’t stay long as in 1916 the city directory listed the house as vacant. By 1916, 107 Beacon Street had a different owner as Herbert Berry had purchased it in 1914. Berry was a real estate dealer with an office in the Press Building and a house on Glenwood Street.

1917 saw the cycle continue with an insurance agent named Winthrop Burgess in residence at 107 Beacon. In 1918 it was Mary Raff for whom I can find no information whatsoever. In 1918, Herbert Berry sold the property to Eda Chapin whose husband, William, was a teacher at Portland High School. The Chapins would be the first owners to live in the home. 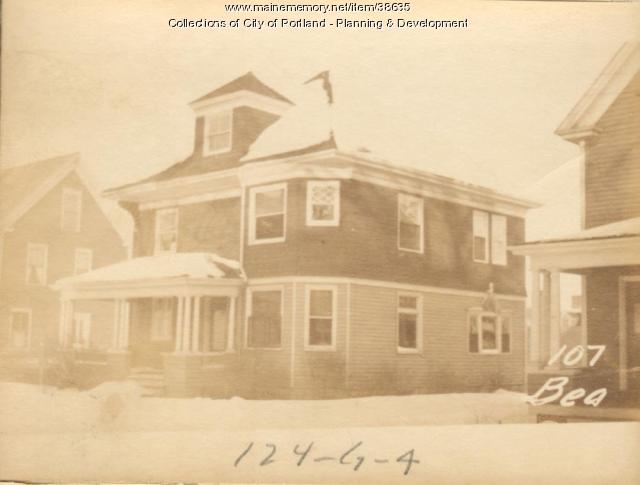 William Chapin was born in 1878 in Chicopee MA. Eda was born in England in 1869. They were married in 1907 and had no children. In 1923, Eda sold 107 Beacon Street to an attorney named Sherman Gould. 8 months later, Gould sold to Bridget Sheehy. She sold it to a shoemaker named Samuel Snider in 1926. During this time, the house was vacant. Samuel and Jennie Snider lived on Vesper Street on Munjoy Hill. The Sniders sold the home in 1935. During their ownership, the house was occupied for most of the period by Harry and Susie Bradbury. Harry worked as an office manager for the Brown Company lumber firm on Commercial Street. They were married in 1906 and had no children. According to the 1930 census, they paid $65 a month to rent our subject. 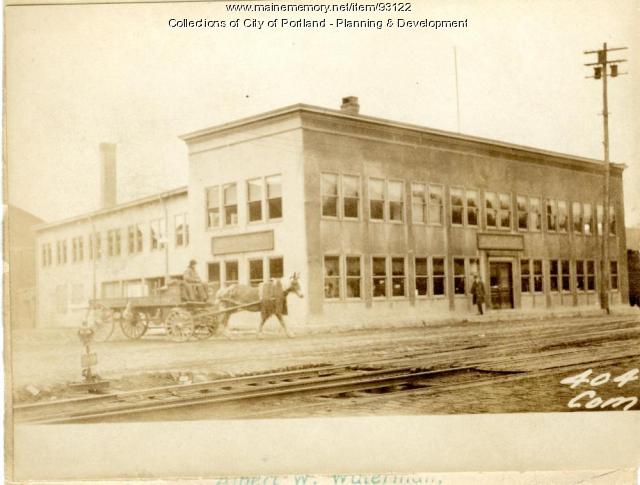 107 Beacon Street was purchased in 1935 by a real estate broker who lived on Stevens Avenue named Malcolm Winslow. Winslow sold in 1938 to Ruth and Albert Issokson/Issackson. Albert was a Swedish immigré who was born in 1910. Ruth was born in Boston in 1917.  Albert was naturalized in 1935 and the couple married in 1937. Their graves in Mount Sinai Cemetery note they were “beloved mother and father” but I can find no record of the birth of any children. Ruth’s parents were Russian immigrés who ran a furniture store on Preble Street. Albert worked and no doubt met Ruth there. Ruth’s family was involved with Portland’s Jewish community with her brother Newell being active in Temple Beth El.

The entry is modern and does not fit with the style of the house. The porch is quite welcoming although there is some sag showing in the right front corner. I do like the red floor.

Ruth and Albert Issokson sold 107 Beacon Street to Guy and Hazel Henderson. The Hendersons were natives of Aroostook County with Guy being born in Littleton in 1898 and Hazel in Mars Hill in 1906. Guy worked for the state road commission. They had 2 sons, Lawrence and Vaughan. They sold in 1950 to Fred Foley Jr. Foley’s family ran a home heating business and dabbled in real estate on the side. In 1953 Foley sold to Milton or Milford and Edith Fink. Milton was born in Maryland in 1905 and Ruth in Portland in 1911. Milton originally worked as a pharmacist but, by the time they purchased our subject, was working for Hub Furniture. They were married in 1929. They had a son, Albert, in 1930 and a daughter, Helene, in 1934. The Finks owned 107 Beacon Street until 1979.

107 Beacon Street is a single-family home. Condition is very good.