Looks can be deceiving. From the street, 1 Cobb Avenue seems to be a Colonial Revival from the early 20th century. It is a bit wonky in its proportions and the windows are oddly sized and spaced. Those windows are a key to the real age of 1 Cobb Avenue.

Thaddeus Broad was from Natick MA where he was born in 1744. He came to Falmouth in 1771 and settled in what is now Stroudwater along the road to Boston. The Boston Road, Now Westbrook Street, was the only access to the peninsula until the first Vaughan’s Bridge was built over the Fore River in the early 1800s. 1771 was also the year Broad married Lucy Skillins. Lucy’s father, Samuel. was Thaddeus’ employer in those early days. By the late 1770s, Thaddeus and Lucy had opened a tavern in the modest house they built. In 1785, Broad purchased the land he had been renting and built the beginnings of our subject house.

It is thought the original house did not have the saltbox addition at the rear. As such, the house as seen today most likely has the same dimensions as the first tavern. The current building measures 35′ on the street and 29′ deep. It is 2 stories in height with living space in the garrett. The portico is 11′ wide and 7′ deep. When the addition was made is unclear, it may have been as early as 1786 or so. The addition supposedly contained a hall, dining room, and a bowling alley of all things. 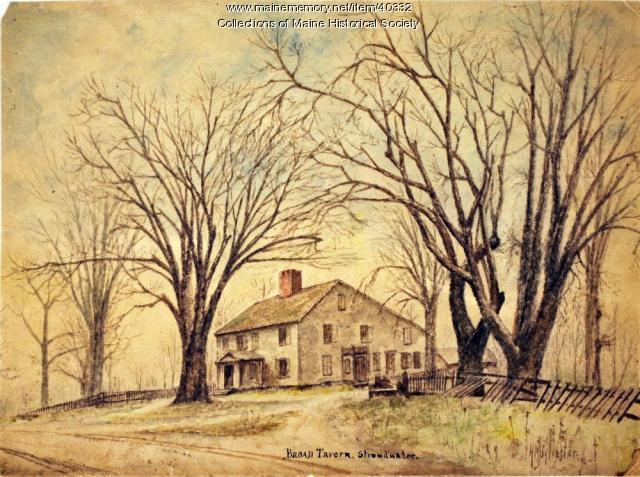 The Broads ran their tavern with the help of their 11 children. The tavern was popular with travelers along with locals looking for a refreshment. According to Myrtle Lovejoy’s ‘This Was Stroudwater’, the tavern was a regular stop for the militia after musters. Thaddeus built a railed platform in the massive elm that graced the front yard and served customers in the elm. One of them was supposedly the Marquis De Lafayette.

In 1824-25, Lafayette made a “Farewell Tour” of the US that was a huge success. His visit to Portland included a banquet at Asa Clapp’s mansion on Congress Street that included the first servings of ice cream in the city. The Marquis was said to have stopped at Broad Tavern and had a drink in the elm called the ‘Lafayette Elm’ afterward. This story may be apocryphal as the incidents of ‘Lafayette stopped here’ are almost as ubiquitous as those of ‘Washington slept here’. There is also the question of timing as the historical record shows him in Dunstan at 8 am and Portland before 10 am. Not much spare time given travel conditions in the day. The Lafayette elm was blown down in a storm in 1883 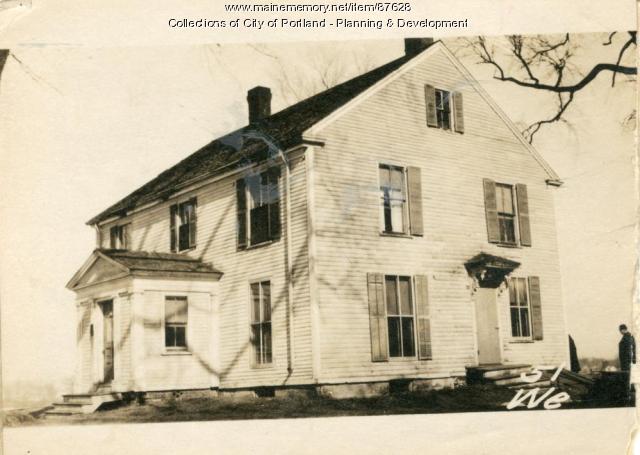 Thaddeus Broad died in 1824 and Lucy died in 1837. Their son Silas ran the tavern until dwindling business forced him to close in 1840. Silas and his sister Almira lived there until Silas died in 1873. Lovejoy states Silas “dressed in fineries and refused to do any farm work”.
Almira transferred the property to Ann Jones. Ann was the daughter of Mary Broad Joes, Thaddeus & Lucy’s eldest daughter. Mary was married to a shipmaster and ran a boarding house on Park Street in Portland. Almira continued to live here and, with Leonard Bond Chapman and others, opened the tavern as a sort of museum while raising money for the Chrisitan Temperance Movement.

I noted in the introduction that the windows held a hint of the real age of 1 Cobb Avenue. Regular readers and architecture buffs will note the depth, or height, of the first-floor units. It’s a style popular before the Civil War and most commonly seen on Greek Revival houses. Here on our subject, they are period replacements no doubt. The original windows would most likely have been closer to those seen on 136 Pleasant Street. Nonetheless, they do note an older structure than what may appear. On a finer note of detail, the first-floor windows on the gable ends have been replaced since 1924 as, in the picture of that year, they are full size like the front windows, today they are smaller units.

In 1892, Mary Jones, then living in Philidelphia, sold the Broad Tavern and farm to Elmer and Frank Cummings. The Cummings brothers ran a wholesale grocery business in Portland. Frank transferred his share of the property to Elmer in 1895. In 1922 the Central Maine Development Company purchased the property from Elmer. That same year, the company filed a land plan with the registry of deeds covering all the land from Westbrook Street to Long Creek and the Fore River,

Broad Tavern on the Chace map of Cumberland County for 1857. Library of Congress

The map above shows the Broad house under Silas’ ownership. Note that the house is shown on the opposite side of the road from where it is now. Herein is another part of the story of 1 Cobb Avenue. The same year the Central Maine Development company purchased the Broad Farm, Dr. Cliiford Strange of Portland purchased the land just south of the Bay Shore property and constructed a landing strip for his and a few friends’ airplanes. The field grew and by the 30’s it had outgrown its initial space. In 1934 the then named Portland City Airport purchased all of the Bay Shore property except for the Broad house and barn and leased it to the City of Portland to operate. In 1937 the city took the property by eminent domain and renamed the facility the Portland Municipal Airport. In 1947 the city purchased the house, barn, and remaining land with the intent of demolishing the structures. For some reason, the decision was made to sell the house instead. it was purchased by Russell Smith and moved to Cobb Avenue to start the next chapter of its life.

Judging from the existing entry and photographic evidence, I do not think the enclosed entry is original to the house. The corner pilasters and entablature are not repeated on the main structure. Neither is the closed pediment. The historic photos show even more detail with fully defined pilasters on the corners as well as on either side of the entry. Again, none of this detail is to be seen anywhere on the main body of the house. I would guess the build date was around 1805-1810 and the inspiration was Asher Benjamin.

Detail of a Cyanotype taken by a Longfellow family member, (either Alexander Wadsworth Longfellow Jr, or Richard King Longfellow) in 1887.National Park Service

Russell Smith was a clerk at the Eastland Hotel. He was born in 1923.  Smith rented part of the house to Clement and Julia Voyer. In 1952, Smith sold the house to a dentist from South Portland named Fred S Woods. Woods rented the house to Harry McFarland who worked at the Pineland Center. In 1962, Woods sold the property to Harry’s daughter Jennie who was in the Army, and a nurse named Lillian Hibbard. McFarland and Hibbard sold to a Madeline White in 1967. In 1968, White sold 1 Cobb Avenue to George and Lorraine Crawford. The Crawfords owned the property until 1992.

1 Cobb Avenue is a single-family home in very good condition. Many thanks to the work of the Portland Maine History 1786 to Present Facebook Group for their work in preserving the region’s past and telling the stories. Their work on the Broad Tavern was a great resource, and the inspiration for this article,