A Greek Revival double-house in the Bayside neighborhood.

Cumberland Avenue follows an undulating path as it runs from Portland High School to Deering Avenue. Traveling southeast from Elm Street, the street rises to a crest between Alder and Parris Streets before descending again to Forest Avenue. Our subject sits just below the crest at the corner of Hanover Street and gazes at the people that traverse Casco Street between Cumberland and Congress. Something it has done for 170+ years. 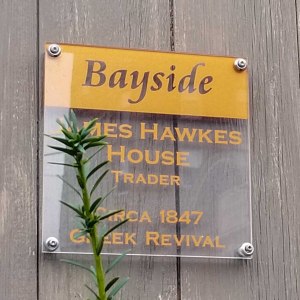 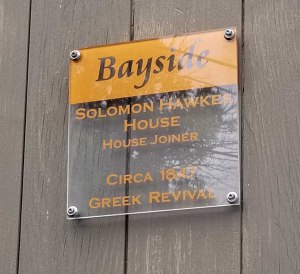 The plaques on 369-371 Cumberland Avenue, from the Bayside Neighborhood Association, are correct, but they’re not correct. The house was the home of James and Solomon Hawkes. They were a trader and house joiner. The problem is, James was the joiner and Solomon was the trader. 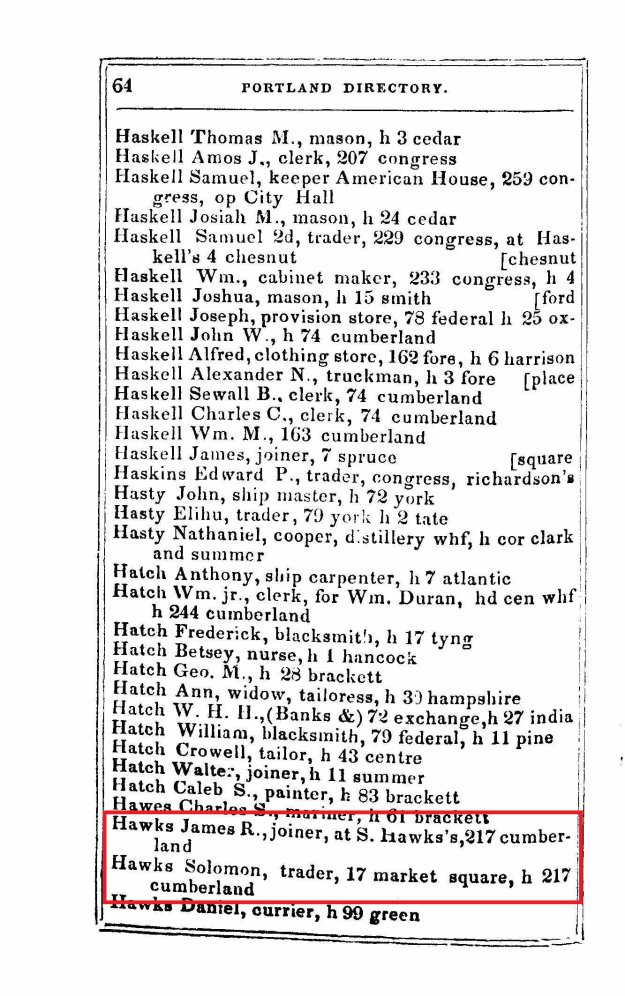 James and Solomon Hawkes in the 1846 city directory. Note their respective trades.

Faithful readers are aware of my love of these ‘Greek doubles’. The simple yet elegant forms speak of a people wanting to emulate an earlier, more ‘noble’ time. The style also lent itself to joiners as the shapes were easy to execute in wood. No fancy curves. No arched or Palladian windows. Just straight lines and 90° turns.

The house measure 41′ on the street and is 31′ deep. The lot is about 51′ square with an odd 10′ x 11′ protrusion running behind #5 Hanover Street.  The southwest corner of the building is on the property line. The house has a full first-floor with a second-floor in the garret. Details are very similar to 2-3 Mechanic Place and 88-90 Sawyer Street.  The entries are set into the building in the ‘Portland mode’. The detailing is simple yet effective. Matched siding is overlayed with similarly matched boards running vertically emulating columns. They support a flat architrave into which small sliding windows aligned with the openings of the first floor are set. 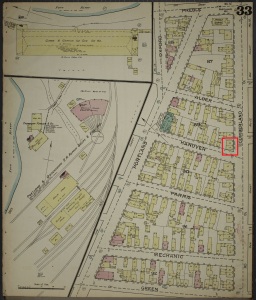 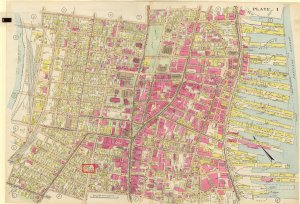 Information on Solomon Hawkes is limited. He was born in Marblehead MA in 1801. He married Martha Hawkes of Windham in 1836. Windham was originally known as New Marblehead as it was a township set off for veterans of the Revolution from Marblehead. It is very likely that Solomon had a familial connection to Windham and Martha was a relative. The Hawkes had 7 children with all but 1 dying before reaching the age of 10. Solomon died of bronchitis in 1850.

James Hawkes was born in Windham in 1817. He was Martha Hawkes’s brother. James married the daughter of a Brunswick shipbuilder, Mary Woodside, around 1858 or 59. They had one child, Edgar, in 1860.  James was a joiner for many years but by 1870 he had moved into the specialty trade of ‘stair builder’. The building of stairs was and still is, a skill that requires advanced knowledge of math and geometry along with the needed carpentry skills. It is one of the higher levels of the carpentry trade. James seems to have been good at his job as he claimed an income of $600 in 1870. 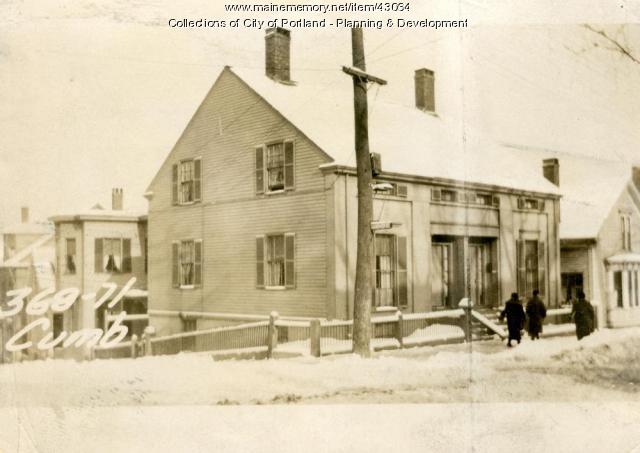 Martha Hawkes stayed on Cumberland Avenue after Solomon’s death in 1850. Her surviving child, Hamilton, lived with her and eventually followed his father’s path into the retail grocery working with Josiah Duran in a market across the street from our subject. Martha died in 1892 and Hamilton in 1900.

The first-floor windows are probably the most ‘Greek’ item of the building, other than the basic forms. With their impressive depth and strong but simple moldings, they are a beautiful example of the type. Other items worthy of note are the interior shutters and the method of connecting the rails to the header.  The latter being the sign of a craftsman. 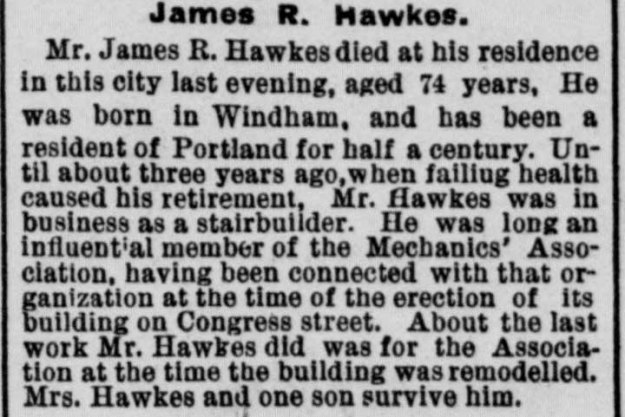 James R Hawke’s obituary in the May 9, 1891, Portland Daily Press. Library of Congress.

James Hawkes was a devoted member of the Maine Charitable Mechanics Association. He joined soon after his arrival in the city and remained an active member for the rest of his life. He served as a Trustee for many years along with serving on various standing and ad-hoc committees. He was involved in the building of Mechanics Hall on Congress Street in 1857-59. At that time, he was still listing his trade as ‘joiner’ so it is unclear what his role was in the building of the hall.

James Hawkes died on May 8, 1891. He was 74 years old. In 1892, Edgar Hawkes married Elizabeth Sawyer of Portland. Edgar ran a foundry pattern-making shop on Cross Street next to the Delano & Winslow Planing Mill & Lumber Yard that ran from Commercial to Fore Streets. Elizabeth gave birth to a daughter in 1893 who died the same year. James R Hawkes was born in 1895. Mary Hawkes died in 1896.

While the Hawkes family lived in 371 Cumberland Avenue, 369 Cumberland was rented out. Some of the tenants included

Edgar Hawkes died in December of 1924. He was 64 years old and had known no other home than 371 Cumberland Avenue. In July of the following year, Elizabeth sold the property to Christian Kragelund. Kragelund was born in Denmark in 1887 and immigrated to the US in 1907. He married Helen Haggett in 1924. He was a real estate dealer and developer with an office in the Press Building. When he purchased the house, he took a $10,000.00 mortgage from Andrew Geele who was the president of the Charles Mclaughlin Wholesale Grocer. Geele foreclosed in 1931.

Andrew Geele did not live in our subject. He rented it out to various people including the pastor of the North Deering Congregational Church, Alison W Wentworth, and a clerk for a clothing store on Congress Street, Joseph Reese. Reese purchased 369-371 Cumberland Avenue in 1946. Joseph sold to a retired shoemaker John Reardon and his brother William who worked as a janitor and porter in 1957. The Reardon family owned the property until 1975.

369-371 Cumberland Avenue is currently listed as a 3 family house. The condition is very good.