Built in 1876 by Alfred Roberts

A diminutive Second Empire in the Munjoy Hill Historic District

Alfred Roberts had a thing for shoes. Well, boots and shoes really. It was a family thing for Albert. He was the youngest of 6 children. Born in 1838. His father, Oliver, died when he was 7.  He first appears in the 1860 census living in Durham with his mother, Sophia, and his brother George, sister Sarah, and a boarder named George Harding. Both Georges and Alfred were shoemakers.

Alfred purchased the lot for our subject from Benjamin and Nymphas Noble in October of 1875. The house he built is a mere 19′ wide on Quebec Street and stretches 48′ back. The rear 25 feet of the house is an ell some 25′ wide. An interesting aspect of this arrangement is the entrance, stairway, and main hall run across the house at the point where the ell connects. It’s known as a ‘back hall plan’ and is a rare thing.

The exterior details are rich with elaborate hoods over the windows, brackets, and odd rosettes in the entablatures. The rosettes project substantially from their base and are very unique. There is a projecting bay on the Lafayette Street facade. The Mansard roof is very vertical with no curvature. The current roofing replaces a more elaborate slate surface.

In January of 1871, Alfred married the Annie Fritz, the youngest daughter of a Lynn MA lawyer, in that city’s First Baptist Church. They had two sons, Alfred Jr and Ammie. Alfred Sr worked as a boot and shoe seller on the corner of Congress and Casco Streets. In 1886, the family packed up and headed west.

Annie Roberts died in May of 1898 at the age of 45. The cause of death was TB. She was living in Los Angeles at the time. Alfred died in September of the following year from the same disease. His place of death was Portland.  Some information says Alfred was growing oranges in LA when he died. The photo below may be him.

80 Quebec Street remained under Alfred Roberts ownership until 1909 even though he died nearly 10 years previously. Why is not clear. Neither of his sons came back to the city from what I can surmise. Regardless of why, in 1909 an attorney named Carroll Morill acting as Alfred’s executor sold the property to Jennie Honan.

Jane ‘Jennie’ Clancey Honan was born in Ireland in 1866 and came to the US in 1878. She married Partick Honan, who was born in 1864, in Portland in 1887. They had 3 sons and 2 daughters. Patrick was a teamster for several outfits. The Honan’s would live here through Patrick’s death in 1924 and Jennie’s death in 1941. Their daughter Nora moved in after her husband’s death and lived here until 1953 when she sold it to an advertising salesman named Alfred Crossman Jr and his wife Isobel. 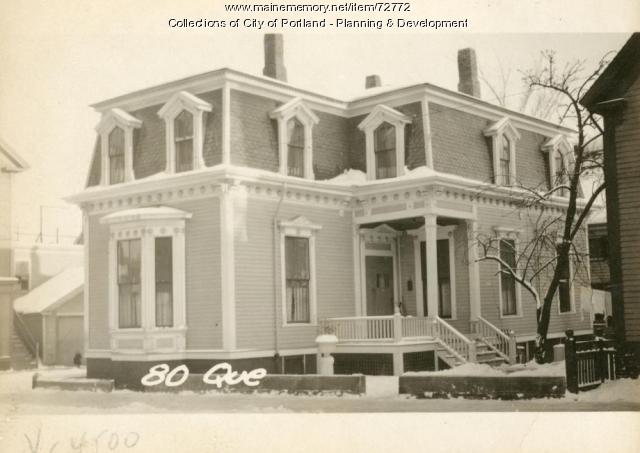 The Crossman’s ownership of 80 Quebec Street lasted until 1962 when they sold to a couple named William Jr and Francis Holland. William and his father ran a drugstore on the corner of Washington Avenue and Monroe Street. The Hollands sold in 1966 to a WWII and Korean War veteran named Edwin Mooers and his wife Annie. The Mooers lived here until 1971 when they sold it to Carmillo and Anna Nappi. The Nappi’s were second generation Italian Americans. Their parents all coming from Camposano, Naples. Carmillo died in 1974. Anna lived here until 1983.

80 Quebec Street on the 1886 Sanborn Insurance Map. Library of Congress

80 Quebec Street is a listed as a single-family home. The condition is very good.

80 Quebec Street on the 1886 Sanborn Insurance Map. Library of Congress