A multi-family Italianate in the West End Historic District.

Well, I’m pretty sure Mr. Butler built it. Regular readers will know that my standard for determining the build date of a building hinges on when the term “with the buildings thereon” or the equivalent is seen on a relevant deed for the first time. The problem with 17 May Street is that doesn’t appear until 1890 and the house is certainly older than that.

Israel Butler was born on a farm in South Thomaston Maine in 1830. At the age of 19, he was working as a blacksmith in the shipyards that lined the Weskeag and St George Rivers in the early 19th century. He married Lousia Purinton, the 22-year-old daughter of a wholesale grocer, in 1862. 1862 was also the year Israel first appeared in the Portland city directories when he was listed as boarding on Franklin Street near Lincoln and working as a clerk for his soon to be father-in-law.

When Israel Butler purchased the lot for our subject from Daniel Young on April 20 of 1874, he paid $300.00. 6 months later, on October 3, Butler sold the property to a merchant who lived on the corner of May and Spring Streets named Henry Fling. Fling paid $1400.00 for the property. Given that the property ‘metes and bounds‘ are unchanged from deed to deed, and even though the deed from Butler to Fling does not speak of any buildings on the site, I have to assume the building was constructed in this window thus explaining the $1100.00 difference. 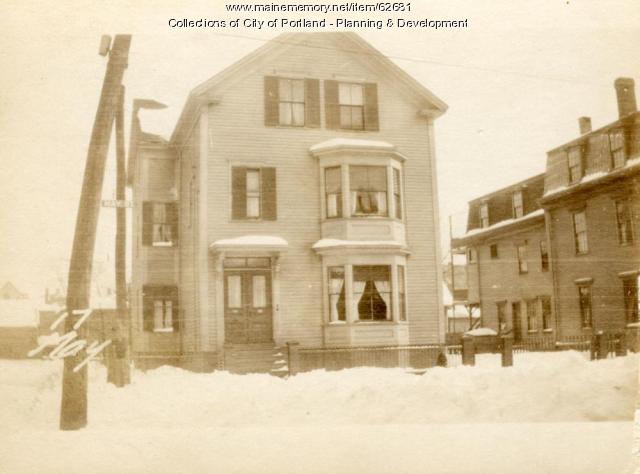 What was built is a two-story series of interlocking blocks varying in width from 24′ on the street to 17′ at the very rear. That rear wall is 64′ from the front. There is a finished third story in the garret. There was never much detail to the house but for the bay, narrow corner boards, an extremely plain entablature on the long-sides, and the entrance. The parking lot on the right side was once a fenced yard. The front of the house overlooks the intersection of Taylor Street with May.

17 May Street, in Red, on the 1882 Moulton map of Portland. Portland Public Library Digital Commons.

17 May Street on the Richards Atlas of 1914. Portland Public Library Digital Commons

Israel Butler never lived in our subject and Henry Fling’s story is better saved for his own home so we will dig into the city directories to see who lived here. One resource list contains about 100 names, some duplicates and family members, so the ‘pool’ is large.

Henry Fling died in late July of 1876 at the age of 67. His widow Jane died in 1887. She was 68. Henry’s will transferred half of his real estate to Jane and half to their daughter Ella. Jane’s will gave half of her share to Ella and half to a pair of grandchildren whose mother was deceased. Ella purchased their shares 1889. In 1890, she sold the property to a master-carpenter who lived on Spring Street named Charles Lovejoy. Lovejoy also owned a house on Taylor Street. I have highlighted his properties on the 1882 map in Blue. Charles died in 1909 at the ripe age of 92. At that time, our subject passed to his daughter Josephine. She died in 1919 and left it to a Philip Lovejoy of Michigan. I have not been able to determine his relationship. Lovejoy sold it in 1920 and it changed hands a couple of time in the next year before being sold to Elvira Lorello & Mary Romito. Elvira & Mary are the first owners I can confirm lived here. 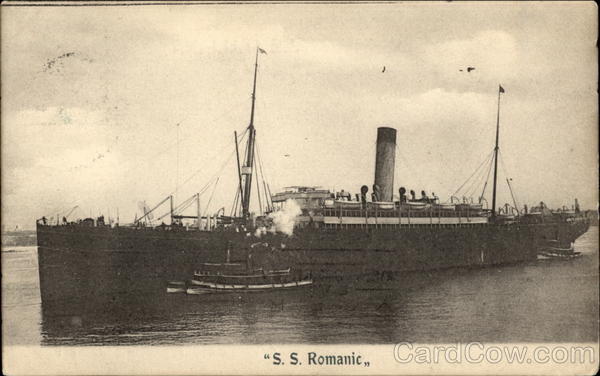 Elvira Giannina Settimia Orlandella was born in Italy in 1876. In 1904 she arrived in Boston on board the SS Romanic. That same year, she married Angelo Lorello (Laurello), a 41-year-old widowed contractor, in a civil ceremony in Boston’s North End. Angelo died in 1913 of either a heart attack or TB depending on the source. Elvira lived with Angelo’s daughter, Mary Romito, and her family. They remained here until 1928 when they sold and decamped to Los Angeles. She died there in 1956.

Elvira Lorello & Mary Romito sold 17 May Street to Wladyslaw Taupieka and his wife Veronika. They were Polish immigrants. Wladyslaw worked as a machinist for the Winslow Pottery and Veronika worked as a domestic. They had a daughter, Ethel. The Taupiekas lived here through Wladyslaw’s death in 1940 and on until 1946 when Veronika sold it and moved into a house on Spring Street with her daughter’s family. In 1948, John Mulherin and his wife Mabel purchased our subject for $7000.

John Mulherin was a private chauffeur. He died in 1957. In 1955, he transferred ownership to Mabel. She lived here until 1960 when she sold to Philip & Cecelia Terrano. Cecelia was Philip’s mother. He worked as a porter at Mercy Hospital. They lived here with his sister Doris until 1963. It changed hands a couple of times before bring foreclosed on in 1969. The 70s, 80s and 90s brought multiple owners the vast majority of which never resided here. Such is the life of a multi-family rental.

17 May Street is listed as a 4-family building. The condition is very good.

17 May Street, in Red, on the 1882 Moulton map of Portland. Portland Public Library Digital Commons.

17 May Street on the Richards Atlas of 1914. Portland Public Library Digital Commons