A large Italianate in the West End Historic district.

Henry Maling was a ‘numbers man’. Born in Kennebunk to Thomas & Mary Maling in 1839, Henry went to sea as a young man before settling down and getting involved in business. From census records, city directories, and other sources, we find that Henry served as treasurer of the various firms he worked for and organizations he was a member of.

151 Pine Street is 32′ wide on the street and 46′ deep. It is 2 stories tall with a third in the garret. Constructed of brick, it is quite understated for Fassett’s work in that time. The details are restrained. A simple band molding marks the line of the first and second floors. Another pair mark the bottom of the entablature and cornice. Rosettes and a dentil molding accent the entablature with brackets adding to the details.
The windows are paired with fairly heavy bands separating the units. Simple sandstone sills and lintels span both units in each window group. A simple bay projects from the southwest corner of the facade. The entrance is on the east side.

Henry Maling and Ernestine Perkins were married in Portland on July 6, 1867. Ernestine was born in Kennebunk in 1842. The Malings had 5 children, 3 girls & 2 boys, between 1868 and 1883. They were long-time members of the Free Street Baptist Church in Congress Square where Henry was the treasurer for many years. He also served in that role on the state level attending annual church conventions for 40+ years. Henry was a partner in the Byron Greenough Company for 30+ years before he retired. His partners were Alphonso Gilkey and Prentice Manning

Note from the April 11, 1870, Portland Daily Press. Library of Congress In 1886 Henry, and we can assume Ernestine, travelled to the Sandwich Islands, now Hawaii. In the mid-1880s, a trip from Portland, Maine to an island some 2400 miles out in the Pacific Ocean was no simple undertaking. Express rail from New York to ‘Frisco had been started in 1876 and by the time of the Malings trip could be done in 3 days or so and the Maling still had to get to New York. That was an overnight train. The ocean leg consumed 2 weeks. While there the Malings would have seen the effects of a collapse of a lava lake of Kilauea in 1885. After his return, Henry gave talks about the trip which included items collected, photos, and other memorabilia.

Clipping from the February 21, 1887, Portland Daily Press. Library of Congress

Henry Maling had an interest in minerals and gems. He had something of a collection that was large enough for him to donate 46 to Colby College in 1889. The Malings eldest son, Ernest, graduated from Colby in 1899. Another event in the 1890s was Henry and Ernestine travelling to Chicago for the World’s Columbian Exposition, aka: The White City, in 1893.

Note from the June 6, 1893, issue of the Portland Daily Press. Library of Congress

Henry Maling died on May 11, 1920, in his 80th year. Ernestine lived at 151 Pine Street along with her daughters Lucy and Alice until her death in 1935 at 92. Alice and Lucy stayed until 1941 when they sold it. The purchaser was the Royal Realty Company. Royal Realty was run by a familiar name for the blog, Christian Kragelund. Royal Realty sold it the same year to Erroll and Ida Shaw who ran a lodging house on Park called the Shawholm. In 1946, the Shaw’s sold 151 Pine Street to a Christian Science Practitioner from Louisiana named Mabel Stewart and her Scottish husband William who was a marine surveyor. William died 1948 and Mabel in 1960. Her estate sold the property to a buyer for the Rines Brothers Department Store named Cora M Connors. Cora was listed as the payer of the property taxes in 1950 but various the city directories for the 50s list her, and her husband Harry, living on Deering Avenue. Harry died in 1959 and Cora remarried in 1963. The following year she sold 151 Pine Street. 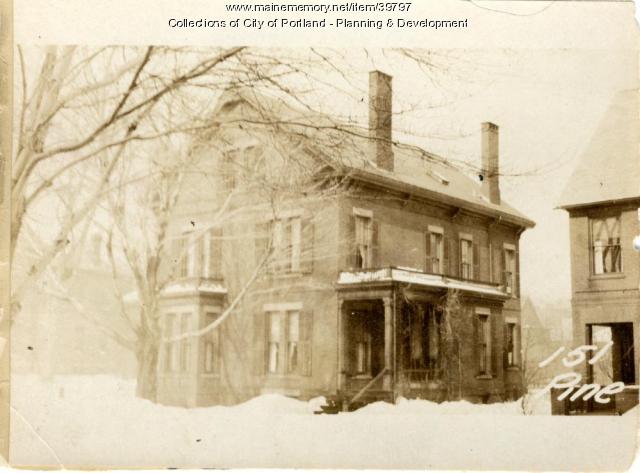 When Cora Connors Flewelling sold 151 Pine Street in 1964, the purchasers were a couple living in Sebago named Willis and Pauline Stepp. Willis was born in Pennsylvania in 1919. He joined the Navy during WWII and, while stationed in Portland in 1943 met a 19-year-old woman who worked in her mother’s beauty salon on Woodford Street. Her name was Pauline Eastman. They married that same year. They had 5 children. Willis worked as a pipefitter for local HVAC companies. The Stepps moved to Poland at some point and rented 151 Pine Street. They retained ownership until 2001.

151 Pine Street is a 5-unit condominium. The condition is very good.

Clipping from the June 6, 1893, Portland Daily Press. Library of Congress 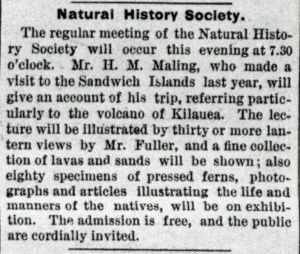 Clipping from the February 21, 1887, Portland Daily Press. Library of Congress

Clipping from the April 11, 1870, Portland Daily Press. Library of Congress