A pleasant Queen Anne in the Deering neighborhood

FOR SALE— New House of ten rooms, two baths, hot and cold water, heated by steam, connected to the sewer, in fine location, two minutes’ walk to school and electrics, a bargain for someone, will exchange for other property. E. VINTON EARLE, 413 Congress Street

The ad above appeared for the first time in the January 7, 1897, edition of the Portland Daily Press. Earle would run it regularly, along with other ads, for the next 6 months before selling our subject to Edward Milliken in early July.

The land for 397 Stevens Avenue was purchased in early 1896 from the Files family who lived next door on the corner of Tremont Street. Earle purchased most of the land bordered by Stevens Ave, Tremont, Lawn and Orkney Streets from various sources including the Files. He registered a plot plan for the land in May of 1896. What he built here was a 3-story structure that 30′ on Stevens and is 28′ deep. The style is solidly Queen Anne as we have seen with much of the buildings put up by Earle. It is my belief that E Vinton Earle, and Arthur Marks for that matter, were using designs purchased from plan-books and built by local joiners.

Eugene Viton Earle was born on a farm in Lisbon Maine in 1866. After school, he apprenticed with a joiner before going into real estate sales and property development. He married Esther ‘Essie’ Hinkley of Lewiston in 1891 and they had 4 sons, the first of whom died from diphtheria in 1895 at the age of 3. The Earles moved to Massachusetts around 1899 where Eugene started a new development company in Boston. In time, two of the Earles sons would join their father. The family lived in Marblehead for a while before settling on Wood Street in Lexington. Eugene Vinton Earle died of a heart attack on July 1 of 1923. He was 57 years old.

Edward Milliken never lived in the house at 397 Stevens Avenue. He lived on Rackleff Street about 3 blocks away. Milliken was a legal stenographer who partnered with Edward Richardson. The pair, operating as Milliken & Richardson Stenographers, had an office on the 4th-floor at 85 Market Street. Edward had other interests that he pursued. He was involved in several business that were chartered around the time of his purchasing our subject. These included two publishing companies which didn’t take off, an early car maker that had some success, a placer gold dredging scheme that had a little success, and a fertilizer company that at least achieved the level of having calendars made. In 1900, Edward Milliken sold 397 Stevens Avenue to Mary F Coleman. Mary was the wife of a dentist named Francis Dana Coleman. They lived nearby on Concord Street. The earliest tenant I can identify is Fred W Files, the son of Thomas & Harriet Files, who sold Earle the land for the house. Frederick was a cabinet maker/carpenter. He had married Viola Silver in 1892. They had 3 children, 2 of which were born in the period they lived here from 1896 to 1903. After the Files, Thomas & Katherine Laflin lived here for one year with their two sons and daughter. Thomas was a clerk at Milliken Tomlinson Wholesale Grocers on Commercial Street. The directory for 1901 lists a Mrs. Marie Peterson boarding here but I cannot find anything about her. The final tenant prior to the 1914 street number changes, our subject was #201 Stevens prior to this event, was Frank H Forbes. Forbes was the president of the E. E. Cutler Company which was a metal working company on Cross Street before starting his own shop on Plum Street.

1914 saw the sale of 397 Stevens Avenue to a widow from Sanford named Lucy Nason. (Author’s note: According to FamilySearch.org, I am the “4th cousin 4 times removed” of Lucy Nason) Lucy’s 2nd husband, William, had died in 1907 and left her with a substantial income. William was a prosperous merchant who had lost his right-hand in the Civil War. Lucy lived here with her daughter from her first marriage, Nettie. Lucy died in 1921 and Nettie purchased the property from her estate in 1923. In 1924, Nettie took a mortgage for $6500.00 from Malvina Clark & Neleah Morgan. The loan was to be paid in quarterly installments over 3 years at 6% interest. Nettie, then living in Walton NY, transferred the mortgage back to Clark & Morgan in 1926. At that time, the Clark and Morgan families were living at 397 Stevens. 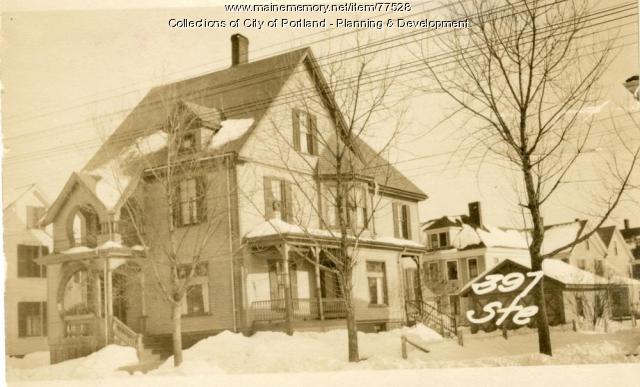 In 1926, Mavina Clark & Neleah Morgan sold 397 Stevens Avenue, along with the existing mortgage, to Florence Maude Huston. Florence was born to Orrington & Sarah Hunnewell in Durham Maine in 1879. In 1900 she married William Roy Huston of Auburn Maine. William was born in 1878 to Thomas & Rebecca Huston. Thomas was a baker who had started out as a delivery driver for a Portland baker before buying his own bakery in 1869. He was successful but suffered the complete loss of his bakery to fire in 1882. He rebuilt and William and brother Nahum joined the firm. They enjoyed increasing success and in 1919 moved to a new facility on Forest Avenue. In 1931 it was sold to the Nabisco Company. William continued to manage it until the late 30s when the family moved back to Auburn. 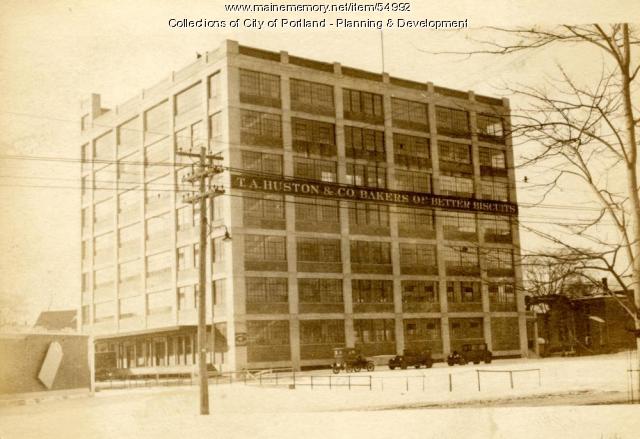 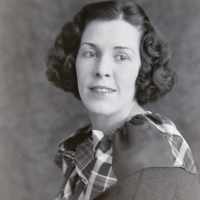 In 1942 Florence Huston sold our subject to Marion G Dugan. Marion, who was a saleswoman at Rines Brothers, and her husband Charles, who was a building contractor lived here with their children 1955 until when they sold it to their daughter Barbara and her husband Douglas Strand. Douglas worked as an auditor for the state of Maine and Barbara had taught drama before becoming a secretary at the Thomas Agency. The Dugans & Strands lived here through Charles’ death in 1963 and Marion’s in 1964 and on until 1972. Douglas died in 1986 and Barbara in 2008. 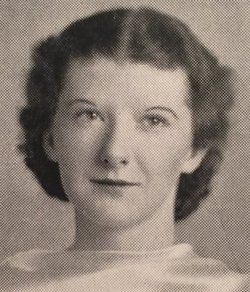 When Douglas and Barbara Strand sold 397 Stevens Avenue in 1972, the purchasers were a couple named White who had recently sold their home on Spruce Street to the Portland Renewal Authority. That property is now under the playground next to the Reiche Community Center and Pool. 7 months later, the Whites sold it to the 1st violinist of the Portland String Quartet, Stephen Kecskemethy. He played with the PSQ until 2012. He died in 2013. He transferred the property to Priscilla Kecskemethy in a divorce in 1993.

397 is listed as a single-family home. The condition is good.