A Second Empire in the Woodford’s neighborhood.

Charles Strout seems to have made little mark on Portland and the surroundings in his brief time here. Having been born in Gorham in 1826, Strout doesn’t even appear in any city directory nor in a census for the city. He and a James Flood advertised that they wanted to “go west” and sell their equipment for making doors and windows in 1852 but that’s about all. History is silent on the success of Flood and Strout’s attempt to sell their equipment, but we can be sure that they didn’t head west as this was before our subject was built.

Charles Strout purchased the land for 138 Beacon Street, and everything extending to what is now Fairmont Street, from Chandler Rackleff for $700 in late June of 1855. A couple of days later Strout took a mortgage from Rackleff for $600 payable in 6 years at an undisclosed interest. Was this for the building costs perhaps? 4 months later, in mid-November, He took a third mortgage from Rackleff. This time for $200 payable in one year with interest that was, again, not listed. What was listed on this document was “the building thereon”. If this building is in fact our subject, then it could be one of the earliest examples of the Second Empire or “French Roof” style built in the region. I am not completely comfortable with this, but we will get back to the matter later.

138 Beacon Street is similar to Alfred Roberts house on Quebec Street in that it is a ‘back hall’ form with the entrance at the crossing and the hall running across the middle block. Overall, the house is a mere 17′ wide at the street and some 55′ deep. The cross-block is also 17′ wide and spans 30′. Details are restrained with little ornate decoration that would come to define the Second Empire Style in later years and can be seen on Mr. Roberts’ home on ‘The Hill’. Overall, it is more cottage-like than urban which would have suited the area at that time.

138 Beacon Street on the 1888 Bird’s Eye view of Deering. Library of Congress

Charles Strout did ‘go west’ in a way. When he took another mortgage in 1861, he gave his residence as Lancaster Mass. This is confirmed by the 1860 census which found he and his family living there with a widow named Nancy Rugg. Strout’s wife died in 1877 and he in 1884. Strout sold 138 Beacon Street to a schoolteacher from Westbrook named Algernon Higgins for $1500 in July of 1865. 4 months later, Higgins, then living in Brooklyn NY, sold it to a confectioner from Portland named Leonard Perkins. 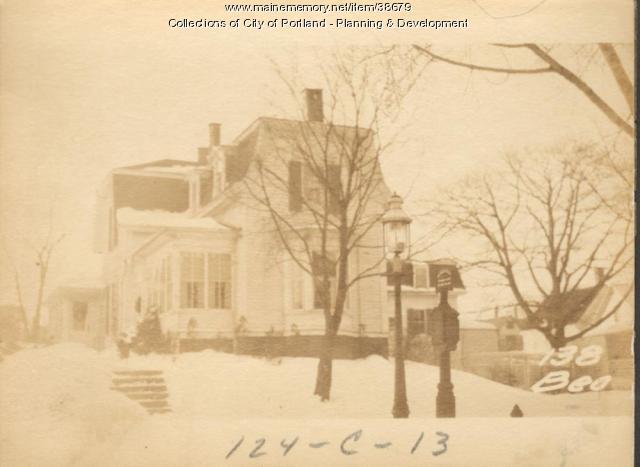 Leonard Jefferson Perkins was born in Weare NH in 1834. His father, Edward, was a physician. He was the eldest of 7. He married Elizabeth Hersom of Lebanon ME in 1857. They had 8 children with one dying in infancy. They were living with his father in Berwick in 1860 with Leonard listing his trade as confectioner. Where he learned the trade isn’t clear. By 1863, he was in Portland plying his trade on Congress Street near the Longfellow House. His purchase of our subject was his first appearance in the registry of deeds. It would not be his last.

As I noted above, the dating here is of concern to me. Most American architectural historians consider the earliest “French Roof” buildings in the US to have been built in 1855-56 and the first of any prominence to be the Renwick Gallery of 1858 in Washington DC. This style of house, with the tight, inwardly curved Mansard, was popular in the post-Civil War period. The examples we have seen here on Portland House Stories date from the late 1860’s to late 1870’s. Balancing this is an unbroken trail of deeds/mortgages stating “building/s thereon” going back to 1855. How to rectify this? My money is on a ‘modernization’.

Clipping from Woodlet’s “Old Homes Made New” of 1878. Somewhere online.

In her book 1999 “Building an American Identity, Pattern Book Homes & Communities 1870-1900“, Linda Smeins noted that the ‘French Roof’ and other styles had reached such a level of popularity in the 1870’s that people were removing the existing roofs and adding new, more modern’ roofs in their place. Examples of these ‘modernizations’ were given in several of the pattern books of the day and examples can be found here in Maine. The house in Gray shown above is one I have been familiar with for over 20 years, and it has always struck a discordant note with me. So, I believe that the Perkins family added the French Roof sometime in the 1870s. It is also possible that they demolished the original house and built our subject. A series of mortgages taken against the property in late 1879 lead me to that year as the likely time. Those mortgages would come back to haunt the family.

In the late 1870’s, Leonard J & Elizabeth Perkins’ eldest son, Leonard J.D. Perkins, joined his father in the confectionary business forming L J Perkins & Son. It was probably about the same time, 1879, that the mortgages mentioned above were taken. The funds may have been used to expand the business. I’m not sure how successful they were but in 1886, it all came to a head.

Newspaper announcement of the declaration of insolvency of L J Perkins & Son and it’s owners. Library of Congress

According to Debt.org, ‘insolvency’ is being unable to make debt payments on time but having possible routes to resolve the situation. ‘Bankruptcy’ is when there is no way of making debt payments at all. This is of course, a simplified explanation, but it suffices to explain L. J. Perkins & Son’s predicament in the late 1880s. The insolvency was discharged in 1887 with the real estate being assigned to a fruit dealer from Cambridge Mass named Frank L Ripley and a Portland attorney named Charles A True for auction. Which seems like something that would happen in a bankruptcy. Regardless, On February 1st, of that year, Elizabeth Perkins purchased our subject for $1.00 which was the highest bid per the documents at the registry of deeds. She then transferred it to Leonard.

Leonard & Elizabeth Perkins lived at 138 Beacon until 1891 when it was sold to Charles F York of Deering. Charles York is something of an unknown character. I know his wife was named Annie and they were married in January of 1885. They were members of the Order of the Eastern Star. They were amateur rosarians if the clipping from Portland Daily Press of June 1900 is anything to go by. If anyone knows what a ‘Raglber’ rose is, please get in touch.

When he sold our subject in 1904, Charles F York was living in Concord New Hampshire. He sold it to a Harry J Brown of the same city. 12 days later, he sold it to Ethel York, also of Concord. Ethel does not appear to have been related to Charles and Annie from what I can determine. In 1908, Ethel sold 138 Beacon Street to Arthur Floyd. Floyd was born in Portland in 1870. In 1891, he married Annie Pierce, also of Portland. The following year, Annie gave birth to their only child, Gordon. Arthur was the long-time assistant superintendent of Evergreen Cemetery. The Floyds lived here until 1926. In that year they sold it to Rose Bernstein, whose husband, Levi, partnered with Harry Jacobsen in a marine ‘junk’ business on Commercial Wharf. 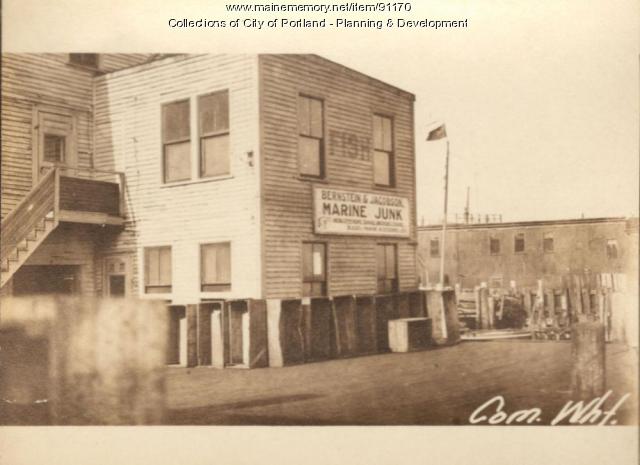 When she purchased 138 Beacon Street, Rose Bernstein took a mortgage with Maine Savings Bank for $5500.00 payable in one year. At the same time, Levi took a mortgage from Arthur Floyd for $3500.00. This was to be payed with semi-annual installments of $500.00 with 6% interest. In 1930, the Bernsteins took another note for $2000.00 from a life-insurance office manager from Lawrence MA named Joseph Salhanick. This mortgage noted the previous 2 which at that time were valued at $6500.00. In July of 1933, Maine Savings Bank foreclosed. What happened to the other mortgages is not clear as neither show notes for discharges, assignments, or foreclosures.

Maine Savings Bank held the title to 138 Beacon Street until 1943 when they sold it to William and Faith Nelson of Waterville Maine. In the interim, the house was rented out. Among the tenants were:

William and Faith Nelson sold our subject to Gladys Preble & Gloria Thibeault in the spring of 1946. Gloria was Gladys’ daughter. They lived here with Gladys’ husband Cecil and Gloria’s second husband Lawrence Sorenson. Gladys died in 1953. Gloria lived here with her 3rd husband Francis, Lawrence having died in 1963, until 1975. The purchasers were Arthur & Caroline Bennet. They were from Watertown NY & Rumford ME respectively. Arthur was a Coast Guard retiree who taught in the Old Orchard School system. Caroline worked for the Portland Police Department for many years. They were both docents at Victoria Mansion and volunteered with the Portland Players. They sold the house in 2000 to Nancy Barba & Cynthia Wheelock who are well-known preservation architects. They sold the house to the current owners in 2018.

138 Beacon Street is listed as a single-family residence. The condition is very good.