A peculiar Greek Revival in the Munjoy Hill Historic District

Calling it ‘Greek Revival’ is, admittedly, pushing things a bit. The form and basic arrangement are ‘Greek’ and a few details as well. In all honesty, as we see it today, it really doesn’t have a ‘style’ 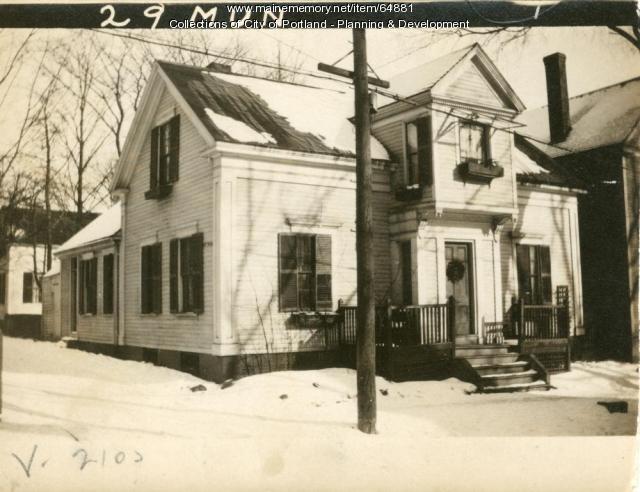 Charles M Libby purchased the land for our subject, on the corner of Munjoy Street and Hansens Lane, from a mould maker at the Portland Company named Charles Lovejoy in early September of 1860. He paid $600 for the land. At the same time of his purchase, Libby took a mortgage from Sylvester Beckett for $400. That ‘note’ was payable over 4 years. The note says “with interest” but I do not see what the rate was. The note was marked as paid in full on October 16 of 1862.

Charles Morris Libby was born to Nahum & Sophia Libby in Buxton in 1824. Nahum was a mason, but Charles did not follow his father’s vocational footsteps. Charles grew up in a new age. The age of steam. He would work his entire adult life in the field. He married Annie M Osborn in a Fitchburg MA in 1852. The Libby’s had 2 daughters, Francis in 1854 and Alice in 1859.

The house is pair of interconnected blocks. The primary segment, facing Munjoy Street, is 39′ wide and 20′ deep. It is 2 stories. Running off the main block and facing Hansens Lane is a 16′ deep and 22′ long ell. The windows are symmetrically arranged for the most part with some later additions thrown in. Some of the original details can be seen in the gable end facing the lane.

After they had paid off the original mortgage on 29 Munjoy Street in 1862, Charles and Annie Libby took another one. This time it was from the Portland Five Cents Savings Institution for $700.00. This note was to be repaid with semi-annual payments over 2 years’ time. There was interest but, like the 1st note, what that rate was is not noted. This mortgage is annotated to note it was paid in full in 1905. In 1872, the Libby’s took another mortgage, again for $700.00, from the Five Cents Savings successor, Maine Savings Bank. This mortgage was to be paid over 5 years at 7.5%. This note will come back to haunt the story in the future.

The 1870 census showed Charles, Annie, Francis (Fanny), and Alice living at 29 Munjoy Street on the Fore River side of Munjoy Hill. Living with the Libby family was a 24-year-old ‘junk dealer’ (census term not your author’s) from Barnstable Massachusetts named Asa Crosby. On December 28 of 1871, Asa and Fanny were married. Fanny was 17. In 1873 she gave birth to Archibald and Winthrop was born the following year. The 1880 census showed Fanny and her sons living on Munjoy Street with Charles, Annie, and Alice. Asa is not listed. Some city directories show an Asa G Crosby working as a trader in Boston in staying in the Derby House which was on Cambridge Street. After that, his story goes somewhat blank. He died in New York in 1905. Fanny remarried and died in New York in 1941.

Alice Libby never married. She lived here through Annie’s death in 1891 and Charles’ in 1900. She worked as an assistant, then superintendent, of the periodicals room of the Portland Public Library. A look at the 1914 map above will show that Alice would only have had to walk to the corner of Munjoy and Wilson Streets, a mere 250′ away, before catching a trolley/omnibus that would have taken her all the way to work.

Alice Libby took a $125.00 mortgage on 29 Munjoy Street in 1905. The holder was a Mary McKenna of Boston. It was to be paid, with interest, in one year. In that same year, she took a mortgage from a Mary Sledge of Washington DC for $100.00 payable in 2 years with interest. Both of these notes mentioned the mortgage from 1872. I cannot connect either of these women to Portland, but I note they were both writing allot of mortgages in the late 19th & early 20th centuries. Both of these notes would end up being transferred to Archibald Crosby in 1911. They do not reappear in the Registry of Deeds after 1911.
After Alice died in 1939, things got messy. The mortgage from 1872 came back. How it had been allowed to languish for almost 7 decades is unclear but there it was. On May 29 on 1940, Maine Savings Bank foreclosed. Fanny was still alive but had signed her share of the house to her son Archibald in 1905. As with the two notes from 1905, Archibald’s share of our subject slipped into the mist and does not appear further.

After foreclosing on 29 Munjoy Street in 1940, Maine Savings Bank sold it in 1941 to J Fred Cheney who purchased it as a home for his recently married son Robert. Robert and his wife Myrtle lived here along with John & Myrtle Persson. John was a US Marshall who ended up working for Megquire & Jones Steel on Pearl Street. I suspect Myrtle Cheney and Myrtle Persson were the same person, but this is not clear. Myrtle acquired the property in 1965 at which time she sold it to Alphonse and Anna Russo. The Russo’s were from ‘Little Italy’. The area of Portland around India & Middle Streets. They had run Al’s Market on India for about 20 years before selling it to a man named Micucci. Alphonse died in 1980. Anna sold the property in 1983.

29 Munjoy Street is listed as a single-family home. The condition is good. The owners are a water resource consultant and a program director for a Maine Non-Profit.