Built in 1875-76 for William Anderson and Edward Preble

As mentioned in the Doten house post, the area northwest of Congress & High Streets now known as Parkside became increasingly popular in the 1870s. Prior to the Civil War, most of the land in this area was owned in one form or another by the Preble family. The Prebles were a family with a long history in Portland. Two would serve the nation. Jedediah in the colonial wars and in the Revolution. His son, Edward, would serve with incredible valor in the battles with the Barbary States. 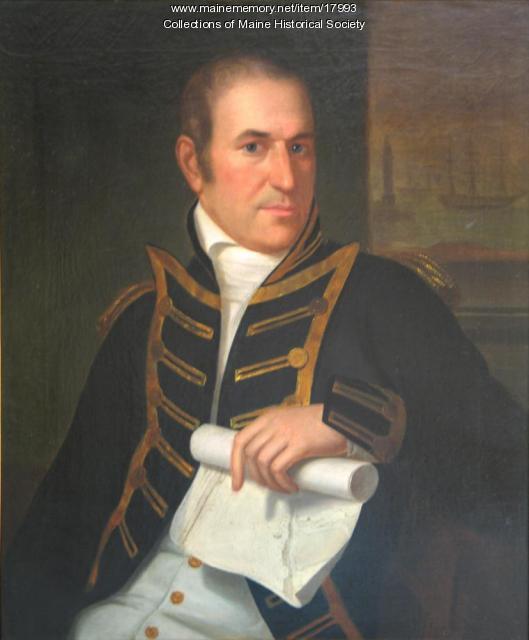 Edward married the daughter of Nathaniel Deering in 1801. He died a tragic death in 1807 at the age of 46. His son, Edward E, was one of the builders of our subject house on, appropriately enough, Deering Street.
Partnering with Preble in building the house in 1874/5 was William Anderson. Anderson was the Treasurer of the Portland and Ogdensburg Railroad, known locally as the P&O. It would appear from deed records that he had married Edward’s sister Alice.
Anderson seems to have been something of a real estate investor as he had previously built a series of connected homes farther down Deering Street at 64–70. It’s also worth noting that Preble would sell the Dotens the land for their house on Cumberland Avenue in 1877.

A typical double house in the Italianate style, the building is a towering 4 stories to the newer dormered garrett standing on the southeast corner of Deering and State Streets. Francis Fassett designed the building and added some unique details. Of particular note is the ceramic tiled beltline. A brick pattern would have been more common.

The black brick headers at the top of the gracefully arched basement windows are a nice touch. The heavily detailed lintels and plinths with inset ceramic tiles are very unique. The motif is carried, with decreasing levels of detail, through all 3 stories. Very thin trim and mullions lend a feeling of sophistication while keeping the attention firmly on the lintels.

The columns of the entry porch are quite elaborate. From a graceful base block through the leaf motif and rope work of the plinth, reeded, round base segments, and hexagonal column shafts, they present a myriad of textures and forms. All stood on gray Maine granite. I wonder what color they would have been painted originally. The column forms are repeated in the attached units framing the entry doors.

The Andersons and Prebles sold the property in 1879. I cannot determine if either family ever lived there. In October of 1888, Thomas Brackett Reed purchased 32 Deering Street from Frank Allen who had purchased it from the Prebles. 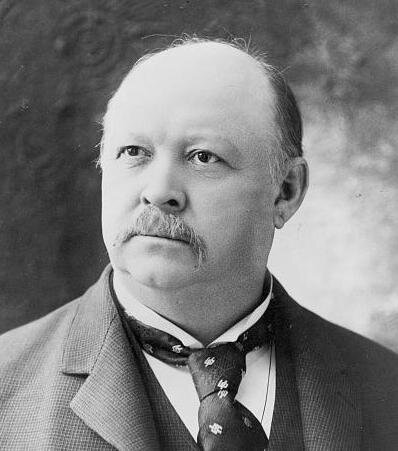 Thomas Brackett Reed was born in Portland in 1838. After attending Portland public schools, he went to Bowdoin College. He graduated in 1860. He served in the Navy during the civil war, holding the title of Acting Paymaster when the conflict ended. He was accepted into the Maine Bar in 1866.
In 1868, Reed was elected to represent Portland in the Maine House of Representatives. He served in the Maine Senate briefly in 1870 before becoming Attorney General. A position he held until 1872.
Reed was elected to the US House of Representatives in 1877. He would serve continuously until he resigned in 1899. Thomas Reed was known for his acerbic wit.  When a fellow member of the House told him “I would rather be right than president”, Reed replied, “you will most assuredly be neither”. He once defined a statesman as a “dead politician”. Your author’s personal favorite was his description of his political rivals; “They cannot open their mouths without reducing the sum total of human knowledge”.
Reed was elected speaker in 1889. He held the chair until 1892. When the Republican party regained the majority in 1895, he was reelected speaker and remained in the role until his resignation. It was during his first term as speaker that he would completely change the rules of order in the house setting off “The Battle of Reed’s Rules” and give much more power to the speaker than ever before. It was during this time that he would gain the title ‘Czar Reed’. Much of ‘Reed’s Rules’ are still in use in the House to this day.
Reed was an unsuccessful candidate for president in 1896 losing the nomination to William McKinley. It would be McKinley’s switch to supporting war with Spain that would drive Reed to resign in 1899. He would devote himself to practicing law for the remainder of his life. During his first term as speaker, Thomas Reed became friends with an up and coming Republican from New York, Theodore Roosevelt.
Roosevelt would become Vice-President under Mckinley then-President upon Mckinley’s death in 1901. In 1902 Roosevelt toured Maine and, while in Portland, paid a visit to his old friend, Thomas Bracket Reed. Thomas Brackett Reed died on December 7, 1902, while in Washington DC. Originally thought to have been some form of gastroenteritis, the cause of his death is now considered to have been Brights Disease and acute appendicitis. His home was placed on the National Register of Historic Places in 1975.
Current ownership is listed as Thomas Reed House LLC.