Built in 1911 for Harrison and Helen Holt.

The area from the north side of Bowdoin Street to Pine Street and from Vaughan Street west saw a flourish of building in the teens and twenties as the former grounds of John Bundy Brown’s Bramhall estate was subdivided. Our subject, at the northwest corner of Chadwick and Bowdoin Streets, is a part of this period and, along with several of its neighbors, has a family connection to JB.

The house is built from brick. It’s two stories with a third in the garret. Style is mostly Colonial Revival with some Arts and Crafts influences visible on the front facade. The form is an extended block along Bowdoin with a rear ell paralleling Chadwick Street.

The main facade has the symmetrical arrangement so common in Stevens Colonial Revival work. Here it is enlivened with patterned brickwork, asymmetrical window types, and walled & roofed entry derived from the Arts and Crafts movement.

The west side, accessed from the service alley, presents a lovely arched lower porch with a very large sleeping porch above.

The Chadwick Street facade is more functional in its window arrangement. The low arches of the first-floor windows help to soften the overall scheme. The dormer is not very well balanced and feels a bit forced. Census records for 1920 list 3 servants living with the Holts. No doubt the third floor contained their quarters.

The rear of the ell has a fine porch that appears to have been rebuilt recently. 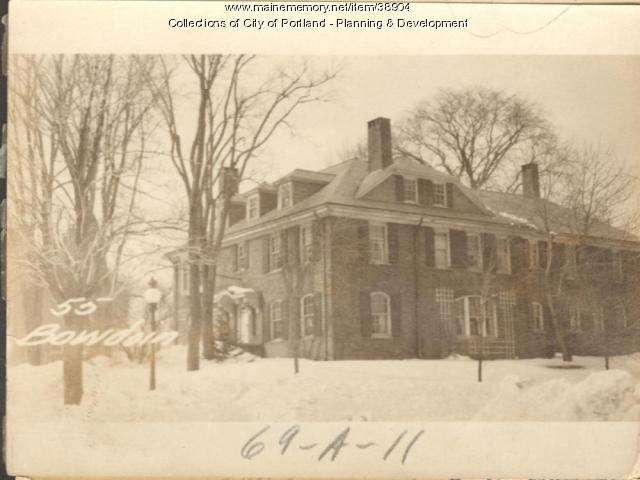 Harrison Jewel Holt and Helen Clifford Brown were married in 1908. Holt was an author and journalist. Helen, as her last name implies, was a member of the Brown family, Her father, Philip, was John Bundy’s eldest son. Helen grew up in a house, demolished in the ’30s, at the corner of Bowdoin and Vaughan Streets. A short walk from our subject.

The Holts would raise 3 daughters in the house all of which would attend the nearby Waynflete School. The youngest, Francis, passed away in 2011.

Harrison died in January of 1956. Helen sold the house to Sally Pierce in August of the same year. Helen passed in March of 1965. The home would pass through several owners of no particular note. The current owners are local veterinarians.