Built in 1919 for James and Rose Macy

A low-key colonial revival in the West End

James F Macy was the treasurer of the S.H & A.R Doten Lumber company when he built our subject house in 1919. He had purchased the property from the Brown family early that year.

James was born in New Bedford Massachusetts in 1869. His parents were William and Amanda Macy. William was a mariner out of Nantucket at the time of James’ birth. Rose was a local girl. Born to a mail agent for the Portland and Rochester Railroad named John Henry Sayward and his wife Lucy in 1867. James and Rose married in 1896. 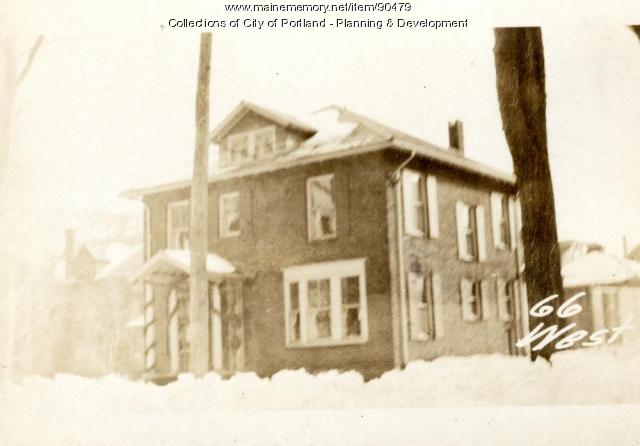 At 1900 +/- square feet, it’s not a particularly large home for the neighborhood but, as the Macy’s never had children, very spacious for two people. The proportions are nicely balanced with the main block being a nearly perfect cube. The brickwork is well executed with a rich color blend and simple treatments of the openings.

As noted, James was the treasurer of the S.H. & A.R Doten Lumber Company which ran a large operation between Fore and Commercial Streets. He had been in the role for almost 2 decades by the time our subject was built. The firm would ride the wave of post-WWI building including selling Aladdin Homes kits and plans. The company would not survive the Depression. 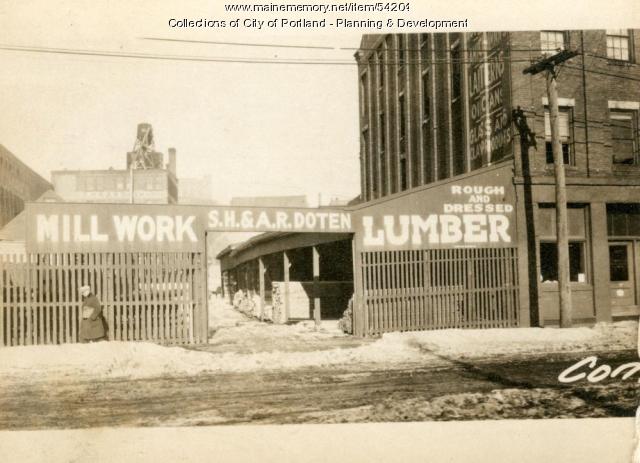 The portico with its open framing and row of quite plain Doric columns is striking for its simplicity and humbleness. It leads to a graceful arched entry. All very calm and understated.

James and Rose Macy had been active in area real estate for almost as long as he had been treasurer of the lumber firm. The registry of deeds has over 100 items, deeds, and mortgages, for the couple that does not appear to involve their own residence. Much of this activity took place after they built our subject. The ’20s were roaring for the Macy’s it would seem.

The west facade shows windows arranged in a functional manner. The middle window of the second story is no doubt at the turn of a stairway. The shortened windows of the first floor rear maybe the location of the kitchen. Also of note are the open-framed eaves which are more Arts and Crafts than Colonial Revival in inspiration.

The ’30s started out where the ’20s left off for Rose and James Macy. If anything, they increased the pace of real estate ventures. They became involved in more mortgage transactions as well. It would be a pair of such mortgages, issued in October of 1931, that would change everything for 66 West Street.

They totaled just under $11,000.00 and were collateralized with our subject house. Payments were $116.80 a month. Although the term “interest and fees” is used in the documents, no interest rate is given. The holder of the note was the Maine Home Loan and Builders Association. The mortgages were also backed by shares in the association owned by James and Rose. On July 5th of 1933, the association foreclosed on the Macys and took possession of the property.

The 1940 census found James and Rose Macy living on the grounds of the Maine Institute for the Blind where he served as the superintendent. Rose died in 1945 and James in 1950. They are buried at Evergreen Cemetery.