A tattered but solid Federal between Danforth and York Streets

Its history is every bit as disjointed as is its facade. I was initially attracted to the wonky little storefront addition on the left and the hefty concrete wall guarding the front of the house. At first glance, it seemed a simple vernacular Greek Revival of the late 1830s to early 1850s. The simple forms and the arrangement of openings are fairly common in Portland. The first-floor windows were a bit of a hint that this might not be correct. Greek revival windows tended to be taller. Often full height. It wasn’t until I looked at the tax photo from 1924, shown below, that I realized I was a generation or more off. 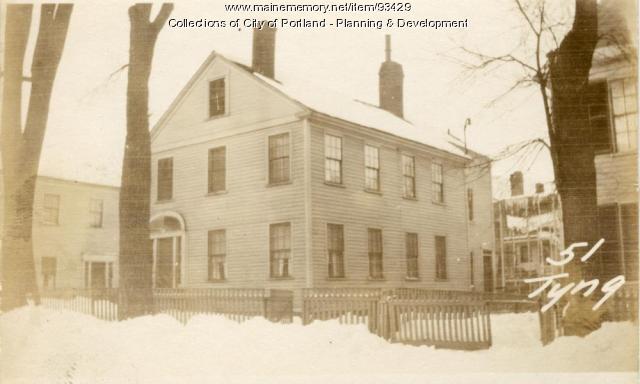 That doorway, side-lit and covered with a hefty fan, is all Federal Period. This means there was some remuddling that occurred sometime after 1924. A review of city directories would suggest the change was made sometime late 1926 or early 1927 as 1927 is the first reference to the Tyng Street Grocery. Lena Levine and her daughter Helen were the first proprietors. Lena was a Russian/Polish Jew who had immigrated to the US with her husband Myer in 1906. Helen was born in 1907.

The deed history for our subject is mostly empty for 50 or so years of its life. I am sure the Hossack family owned the property in the early 19th century and until about 1860. That was the year Charles Hossack assigned his $300 mortgage to Lemuel Dyer. From that moment until William Webb, a merchant from Boston, sold the house to Jacob Judelshon, a Portland real estate investor, in 1916, there is no trail. Webb’s deed does not, as has long been the norm, include a reference to whom he got the property from and when. It does mention a mortgage to Maine Savings Bank for $1900.00 “with interest, from November 1915”. I cannot find this mortgage on the registry of deed’s website.

When Elijah Hossack died in 1818 at the age of 30, he did not leave much history behind. He had married Sally aka Sophia or Sapphire, Williams in 1817. That’s all there is other than his birth.
In 1826, one Elizabeth Estell sold her share of the property to Elijah’s younger brother Charles as did his brother Daniel. In the deed of 1826, she claims ownership “as will fall to me from the estate of Elijah Hossack”. Elizabeth is another curveball in that, according to the census record of 1850, she was all of 2 years old in 1826. The census and 1851 city directory have her living on Cumberland Avenue with Sophia, who had by then taken the last name of Estell as well, along with a 17-year-old Sarah Estell. There is no male with the surname of Estell listed.

The addition for Lena & Helen’s store is a funky little thing. At its front, it’s 12 feet wide and 6 feet deep. It overlaps the main house by 2 feet. It then is a 10-foot wide ‘bump out’ running 24 feet down the side of the building. The current tax information calls the front space ‘utility building’. History states otherwise..

Charles Hossack worked as a cordwainer or shoemaker in the days before mass-produced shoes. Sometime between 1851 and 1857 he changed professions as the 1857-58 city directory lists him as a sidewalk paver. As Portland was growing at a rapid rate during that period, it could be that Charles found the pay better and work much more steady. He died in 1873

Tyng Street, and its neighbor to the north Tate Street, are Portland’s version of Tory Row. They are named for Williams Tyng and Tate respectively. Tyng was the last royal county sheriff and Tate was the last royal mast agent prior to the revolution. Both left the town, were proscribed, and lost their properties. Tate returned to England while Tyng went to Canada and was welcomed back, but not given his property back, after the war.

Although the ownership history is spotty, we do have city directories to give us a glimpse of who was living in our subject. In 1895 Horace W Howe and John Anderson were tenants.
Horace Howe was born in Portland in 1847. His wife Mildred was born in 1848, location unknown. They had married in 1867 and had one son, William. Horace was a freight conductor for the Boston and Maine Rail Road. Horace and Mildred had lived at 12 Tyng prior to taking up residence at 51. In 1899, they moved to State Street.
John Anderson was a shoemaker. He was born in Sweden in 1833. He immigrated to the US in 1871 and was naturalized in 1884. He worked for the Palmer Shoe Company on Congress Street. 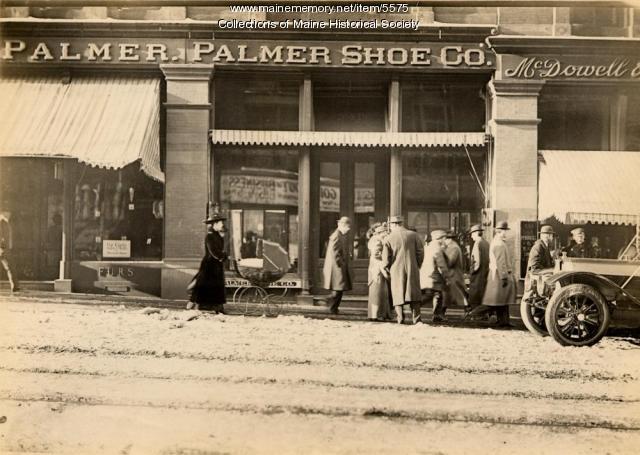 The 1900 city directory gives us 2 new names. John Engman and George A Deering. Engman was another Swede. Born in 1871, he had come to the US in 1894. He and Annie Olsen, a local girl of Swedish descent, married and had a son, John, in 1900. John worked as a slate cutter. By 1910, they had left Portland and moved to Dorchester. In 1915 their son John passed away in that town.

The Tyng Street Market operated until 1974 with a former waitress named Rita Ingham running it for the last decade. Current tax records list the building as a two-family. Condition is poor.