Built in 1900 for Warren & Elizabeth Neal

A cute Queen Anne in the Rosemont neighborhood.

It’s been two and a half years since we looked at 30 Glenwood Street, one of three properties developed by Llewellyn Morse Leighton around the turn of the 19th to the 20th centuries. Leighton was  working all over the city but primarily in the Deering neighborhoods that saw rapid development after the Great Fire of 1866 and the introduction of the commuter railroads in the 1870s. Leighton had purchased the land from Charles Dalton in 1899. Dalton and Annie Jordan had filed a land plan for the upper block of Glenwood from Rackleff to Prospect Streets in 1897. Dalton was involved in the gravel business with the 1910 city directory listing him as managing no less than three different companies involved in the trade.

When Morse sold the property and the home to be built in December of 1899 to Elizabeth Neal, it was the second of three homes he would develop from the two lots he had purchased early that same year. I think the Neals were partnering with Leighton on these houses as they sold our subject in 1901 then bought the lot next door and built that house. Also, Elizabeth is mentioned several times in the newspapers of the late 1890s as being involved in building houses in the neighborhood. She was also very involved in the Women’s Christian Temperance movement hosting and speaking to meetings throughout the 1890s and 1900s.

What Leighton and Neal built was a smallish home in the Queen Anne style. The main block is a rectangle with it’s long side to the street. An oversized gambrel roofed gable projects from the left side of the front roof. This gable covers a 3 sided bay on the first floor. Entry is on the right under a deep porch held up with Doric half-columns. The portico is framed with molded pilasters and carries a full entablature. There is a sidelight at right. The front door appears to be period with it’s large glass pane. A fanciful dormer with colonial revival trim and an elliptic roof projects from the roof above the porch. The entire building is covered in shingles with a tight reveal.

The purchaser of 34 Glenwood Avenue in 1901 was an attorney named Harry Percy Sweetser. Harry was born in Deering in 1873. He grew up in Cumberland, the Sweetser family’s history in that town reaches back into the 18th century, before attending Shaw’s Business College, now Husson College. He studied law with Clarence Hight, the corporate solicitor for Grand Trunk Railroad. He married Mary Marston of Portland in 1897. They had 2 sons, Douglas & Marston, when they moved into our subject. A daughter, Virginia, was born in 1904. Harry worked as the general solicitor of the Grand Trunk out of an office on Exchange Street. In 1909 and 1910, he was a city alderman for Ward 8. The 1910 city directory also listed him as president of the Universal Package Company which manufactured barrels on Market Street

In 1911 Harry Sweetser transferred ownership of 34 Glenwood Avenue to Mary. The following year, she sold the home to Angie Story. Angie was from Bangor and had married Charles Story, her second husband, in 1909. They owned, I’m not sure if they lived there, until 1915 when they sold it and moved to Lewiston where Angie died in 1921.

Anna and Carl Moody were the purchasers in 1915. Carl worked as a teller for the Portland National Bank on Exchange Street. They had 2 sons, Phillip and Charles, and a daughter, Ruth. They sold our subject and moved to a house on Brackett Street in 1919.

Carl Moody, center, at the Banker’s Outing Association at Spurwink on May 15, 1895. Maine Historical Society

When Anna Moody sold 34 Glenwood, you could say the house had ‘moved up’ in the new owner, Walter Wallace Morse. Morse was born on Swans Island in 1885. He married Hattie Griffin of Boston in 1911. When he purchased the house, Walter was the vice-president of the Eastern Casualty Insurance Company which was located on the 3rd floor of the Chipman, now Time-Temp, building. They had 2 children from Hattie’s previous marriage.  They lived in our subject until 1928.

A comparison of the 1924 and current tax information shows how the house has changed over time. In 1924, the main block of the house measured 34’ deep on the driveway side and 38’ on the opposite side. Total square footage for the section was 1292. Today, the same block measures 36’ x 43’ and covers 1548 square feet. The whole square footage has gone from 1500 +/- to 2300+/-. The earlier report showed the house having one bathroom whereas today’s house has 3 full and one half baths. 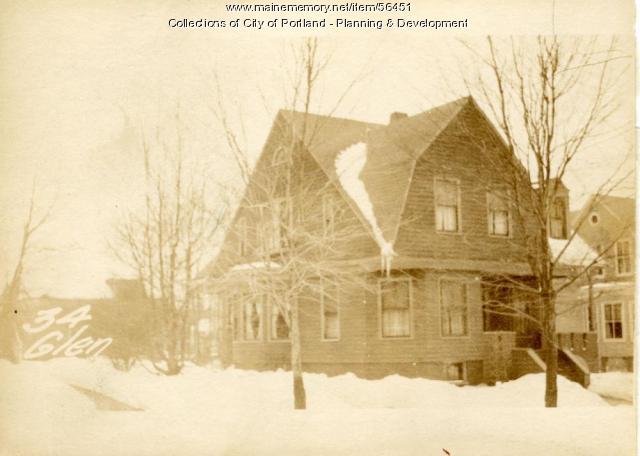 The purchasers in 1928 were Esther and Lawrence Burke. Lawrence worked as a clerk for a Charles Creamer’s confectionary shop on Congress next to the Time-Temp building. By 1940, he was working in the Time-Temp Building selling stocks for Hayden, Stone & Company from their office in the mezzanine of the building. Lawrence and Esther had their first child, Merrill, in 1926 and had Priscilla in 1929 and Jean in 1934. Their standard of living had risen enough that, in 1940, they could afford to have a live-in housekeeper. She was a 19 year old Frances Burney who had been with them for at least 5 years by that time. That would have made her 14, or younger, when she moved in. She was born Marion Frances Burney in 1921 to John and Elise Burney of South Portland. According to the 1934 city directory, she was a maid for, and lived at, the upscale apartment building at 15 Clifford Street prior to going to work for the Burkes.

Esther Burke sold 34 Glenwood Avenue in 1954. The purchasers were James and Stella Ostis. They are a bit mysterious as they do not appear in any census records nor city directories. Stella’s birth name was Stamatakakos which is quite unique and, one would think, easy to find in the historical record. And Stella and James are there. A bit. Their birth records exist, both were born in Lowell Mass in 1922. The Social Security records of their deaths exist. He died in 1979 and she in 2006. That’s about it. The purchase and sale deeds state they lived in Portland but where is unknown. They sold our subject to a telephone lineman named Joseph Cullinan in 1962. Cullinan sold it to Edward and Rhoda Merrill in 1964. Rhoda and Edward divorced in 1975. Edward deeded the property to Rhoda at that time. She would have multiple tax liens and court judgments against the property upto the time she sold it in 2005 by which time she was living in Durham.

The current owners, an engineer and an attorney, purchased the home in 2011. It is in excellent condition.