A stately Greek Revival on the corner of Fore Street

It was a time of great change in Portland and nowhere was this more evident than at the crest of Fore Street on Munjoy Hill overlooking the harbor and the spot where Cleaves and Tucker had made the first settlement around 1630. On that very spot the Portland Company was rising while the tracks for the St. Lawrence and Atlantic railroad were being laid at the base of the Eastern Promenade. A little farther up the harbor, the filling of the wharfs for the creation of Commercial Street was beginning. It was here, at the corner of Fore and Atlantic Streets that Robert Dresser decided to build a stately home around 1852.

The Dresser family had been in the city for several decades by the time Robert built our subject. City directories going back to the early 1820’s list James Dresser selling shoes on Fore Street near India. I believe he was Robert’s father but do not have conclusive evidence of this. By 1844, there were 5 Dressers, including James and Robert, in the city. James was making and selling shoes from a space off Exchange Street between Middle and Federal Streets and the other 4 were all making and selling clothes from seperate store fronts on Fore Street. Robert served as an alderman in 1834 and 1852.

The house is a fascinating hybrid of styles, some old and some new. It’s shape would at first glance appear to be a tall square box but it’s not quite square. The northwest and southeast, Fore Street, sides are 30 feet long whereas the northeast, Atlantic Street, and southwest sides are 32 feet long. It’s built of brick in a running bond and the surface is devoid of any adornment but for the windows, doors and architrave. The main floor windows are deep in the Greek Revival mode with simple lintels and wooden sills. The current entry is a very restrained Greek form as is the porch with its well shaped and scaled Doric columns. The current porch railing is Colonial Revival and was most likely installed around the turn of 19th and 20th centuries when the style was in vogue.

The architrave is minimal but has a unique dowel like molding delineating a line half-way through the frieze. The cornice is modest and has no brackets. Above this is a hipped roof and cupola both of which are more Italiantate, a relatively new style in 1852. The cupola is very detailed with brackets and arched top openings. It’s very well scaled to the building and would bring much needed light to the middle of the building as well as giving a nice view of the harbor. It is my belief that the cupola on the house was added by the second owners.

It was the kind of home that might be inviting to a shipmaster. And William A Anderson was that shipmaster. The records, scant as they are, say he was born near Trenton Maine around 1811. He and his wife Julia were married around 1839 in Trenton. They were residents of that town in 1850, had 4 children and William gave his vocation as mariner. They moved to Portland in 1855 when they purchased a plot of land on Washington Street. They didn’t stay long as the 1858 directory listed the family on Atlantic Street and William was a ship captain. In 1857, Julia had given birth to a 5th child. They purchased 2 Atlantic Street from Robert Dresser in 1860. They paid $2300 for the house and a small surrounding plot. Dresser wrote a mortgage for $1700 payable, with interest in 4 payments over 5 years. The note was paid off in July of 1864.

The masonry on 2 Atlantic deserves some attention. The bricks are quite uniform for the early 1850s. There were 10 brickmakers in Portland in 1851 so, barring the ability to inspect a brick to look for marks, it’s not possible to say who made them. Whomever it was, they produced a pretty consistent product. The mortar joints are narrow. The coloring of the current mortar is striking but I have to wonder about it’s originality. The walls were laid, and have remained, plumb and straight. The lintels over the windows are set flush with the wall and the sills have a minimal projection. All of this combines to create an almost monolithic structure that seems to burst from it’s granite base and rise without restraint through all three storeys which is terminated by a four sided cap.

An odd item is found in the entries for the Andersons in the city directories from the 1860s and 70s. Beckett’s directories for 1863 and 1873 show William and Julia as living at 2 Fore Street. The modern, after 1900, street numbering system places the Portland Company works at 2 Fore Street. The buildings on the side of Fore that our subject is on are odd numbered. The street side issue is easy enough to figure out in that they were flipped when Portland finally adopted a standard for numbering. That leaves the issue of the lack of an entrance on Fore Street. There is an entrance into the parking court and I suspect this is what is being referenced. But, why would they be listed in the basement of the house they owned? It is a puzzlement.

The 1880 census found William, at 69 years old, still at sea. He and Julia were living in our subject on Atlantic Street. Their daughter Adelaide and her husband Martin Sargent were living with them. Martin had grown up on the ‘Hill’ and worked as a machinist at the Portland Company. The couple had married in 1873. In 1884 William sold the home to Arabella Pollister. Arabella, her husband George and their infant daughter Isabella were renting the basement of our subject in 1880. The Anderson family moved to a rented home at 68 Atlantic Street where William died in 1888 and Julia in 1892. Addie and Martin remained there until their deaths in the 1920s.

George Pollister was born and grew up in East Deering where his father, also George, was a shipbuilder in one of the several yards there. He served as a seaman in the US Navy during the Civil War. He served on the ironclad Lafayette during the Vicksburg campaign and actions in Louisiana until his discharge in 1863.

US gunboat Lafayette of the Mississippi Fleet. Library of Congress

After his service, George worked as a harbor pilot before becoming a steamship captain. In December of 1883 he was commissioned as Inspector of Steamship hulls for the Port of Portland. A position we would retain until his retirement in 1910. In his role, he inspected vessels and served on committees investigating maritime accidents in the district which ran from Kittery to Bath. One of those enquiries was into the sinking of the steamship Portland in 1898. 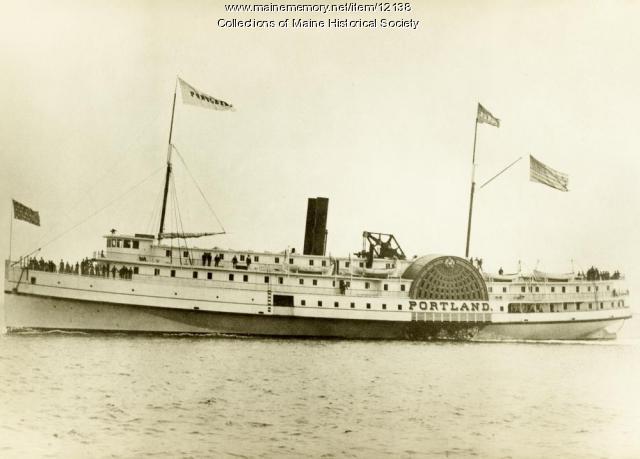 Arabella Pillsbury was born and grew up in Bangor, Maine. She married George Pollister there in 1878. George was most likely working the packet lines between Portland and Bangor at the time. The couple settled in Portland soon after their marriage. They had 5 more children, Marion, Alma, Edward, Raymond & Frederick. Frederick died in 1909 at the age of 19. It was when their first born, Isabella, reached adulthood, in 1898, that Arabella took on a new role in life.

The readers of the Saturday edition of the Portland Daily Press for January 22, 1989 might have overlooked the above advertisement on page 3. It wasn’t large, taking less than 2 inches of a column. It would provoke discussion and debate and become part of a larger movement across the nation. In that advertisement, a group of men from city ward 1, almost all from the islands, endorsed Arabella Pilsbury Pollister for an open seat on the Portland School board. When reached by a reporter for the Daily Press on Saturday morning, she stated that “the nomination was a surprise to her” and she demurred on the question of whether she intended on running or not. But run she did, as did a Dr. Florence N Dyer in the 5th Ward. Doctor Dyer is mysterious. A short search of the usual suspects yielded nothing. If she ran, she did not receive any votes. Arabella ran as an independent and received 30 votes out of some 1100 tallied. 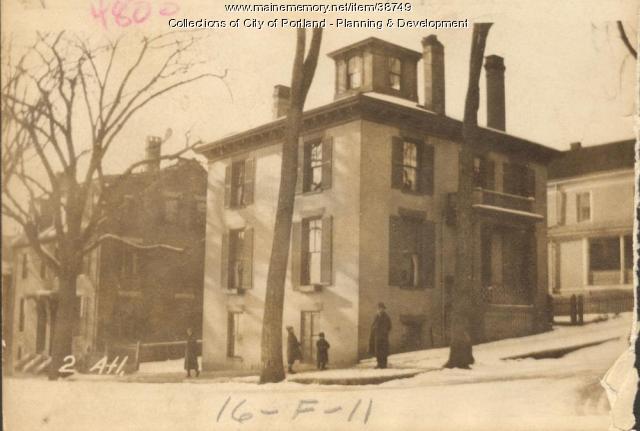 And she wasn’t done. In January of 1899, her name was included in about 100 from Portland on a group of petitions to the Maine State Legislature stating that if women couldn’t vote, they shouldn’t have to pay taxes. That, as we all know, went nowhere in the Maine State House of 1899. It would also seem to end Arabella’s political endeavors. During the first decade of the 20t century, Charles’ continued his inspection work but his health deteriorated. In late 1910, he resigned his position and, in 1911, he and Arabella moved to Hawaii. Isabella had married a professor at Oahu College a few years earlier.

Ethel Swett purchased 2 Atlantic Street from Arabella Pollister in 1912. Ethel was born in Greene Maine in 1881 and married Clinton Swett in 1897. Clint was born on Long Island Maine in 1879. He was involved in many different trades through the years, from chemist to hotel manager, he made most of his money running a wholesale grocery and seafood business on Commercial Street for sometime with the Trefethen family of Peaks Island then on his own. He seems to have done quite well as by 1930, when the family was living in Cape Elizabeth, he gave his net worth as $50,000. 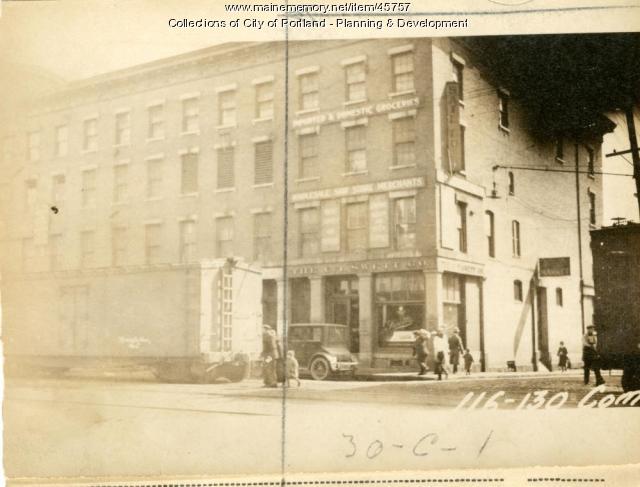 Ethel had transferred the property, and a mortgage with the Cumberland Loan and Building Association, to Cedric Swett, the eldest son, in 1925. Cedric defaulted on the mortgage in 1927 and the ‘CL&BA’ foreclosed. A couple named Rosetti purchased our subject in 1929 taking a $5000 mortgage with the purchase. They defaulted on that mortgage and the home was again foreclosed on in 1934. It bounced around between 6 different owners before being foreclosed on for a final time in June of 1960. The house was occupied by various tenants during the 60s while ownership was under the Federal Department of Housing and Urban Development (HUD). HUD transferred ownership to the Portland Housing Authority in 1968 and in 1969 Howard Jr and Lousie Reiche purchased the property. The deed required restoration to ‘original’ and use as a residence for no less than three years after the purchase.

2 Atlantic is listed as a 3 family dwelling. It is in good shape.