Built in 1868 for Benjamin Farnsworth.

A grand Italianate in the West End historic district

Benjamin Farnsworth ‘saw the elephant’. The term was popular in the 19th century and described gaining worldly experience at a very high cost. It was used a lot during the Gold Rush and that’s how we are using it. Benjamin was born in Lisbon Maine in 1823, or 26 depending on what document you look at, and went to California in search of his fortune in 1849. In 1852 he returned to the east coast, arriving in New York on May 12 aboard the steamship Daniel Webster. He married Caroline Babcock in Boston in the same year. They then settled in Bangor where he became involved in, unsurprisingly, the lumber trade. Benjamin seems to have done fairly well. For the 1860 census, he valued his real and personal estate at $6000. In 1866 he purchased a plot of land on outer Spring Street in Portland. The land had been part of TC Hersey’s grand estate, Oaklands. Farnsworth paid $850.00 for it.

Don’t get me started on the gutters

Benjamin built a substantial house which is well sited on its lot. It’s about 25’ x 70’ with a 20’ x 25’ extension on the northeast side. There are plenty of porches, some screened, covering much of the northeast to southwest sides. It is 2 stories high with a 3rd in the attic. The building is quite tall. The high pitched roof, stacked bays, quoins and deep windows enhance the vertical feel. The windows are set in frames with modest trim on the sides but having a full entablatures above. The walls have no belt lines and terminate in full entablatures with dentils. These are overlaid with brackets.

Benjamin Farnsworth’s timing is intriguing. He purchased his lot soon after completing the first of two mills he built on the banks of the Sabattus River in Lisbon. His family had operated a small carding mill and saw mill on the site since the 1820s. The Farnsworth’s first built a woolen mill that grew into a substantial operation with over 4000 spindles, carding machines etc. At its peak, it produced over 60,000 yards of woolen goods a month. After the woolen mill was established, Benjamin built a paper mill on the river a short distance below the woolen mill. This was sold to a group of investors in 1870. It soon burned and was not rebuilt.

In 1871 Benjamin opened Lamb and Farnsworth with Thomas Lamb. They sold leather and ‘findings’, the hardware used in making harnesses and the like. They started in a small store on Federal Street before moving into the northeastern end of the Woodman Block at 133 Middle Street. In 1875 Benjamin bought Thomas Lamb out and renamed the business BB Farnsworth & Company. In 1881 he added wholesale manufacture of boots and shoes to the company’s lineup. By the end of the decade the business had filled all 4 floors of the end unit and was leasing other space on the upper floors.

Benjamin Farnsworth was active in the gymnastics and athletics movement and was an avid ‘wheelman’, the term used in the latter 19th century to describe people who rode bicycles. He was a lay minister in the Free Street Baptist church. He died in 1906 of ‘senility’. The business fell to Edward, the eldest son, who continued it for several decades. Caroline received title to the house in Benjamin’s will. She sold it to an attorney named Edward Cox in 1907. Cox sold to Seth L Larrabee, also an attorney, the same year. Caroline died in 1908.

Newspaper report from May 24, 1894 about Ben Farnsworth and his efforts to locate the person believed to have hit and injured a fellow wheel man. Library of Congress.

The garage for 357 Spring Street is accessed from Clifford Street. At 18 feet wide, it’s too narrow to allow 2 vehicles to park and open any doors. Looking at the sketches for the 1924 and current tax information, we can see the current garage is 2 feet deeper now. Also, the structure connecting the garage to the house wasn’t there in 1924. As it and the garage share siding and trim, I am of the belief that the garage was rebuilt when the connector was built. The windows may have been in the earlier structure.

Seth Leonard Larrabee was born in 1855. His parents, Jordan and Caroline, farmed in the Black Point area of Scarborough. \ Seth and his elder brother Albion went to Westbrook Seminary, now University of New England. He graduated from Bowdoin in 1875 and was admitted to the bar in 1878. He served as register of probate for Cumberland County for 8 years, was city solicitor for Portland for 3 years and served in the Maine House of Representatives where he was elected speaker in 1897. Seth and his wife Lucretia had 2 sons, Sidney and Leon. Seth Larrabee died in December of 1910 of Bright’s Disease.

These checkerboard patterned walks are unique to Spring Street west of Emery Street. Along with our subject, there is one at the corner of Emery and Spring and one at 364 Spring. Who the craftsman was I do not know. I suspect they were later works as the houses they are connected to span 2 decades of build dates.

Sydney B Larrabee inherited 357 Spring Street after Seth passed. He, like his father before him, worked as an attorney. He would live there with his mother, his wife Frances and 2 children until his death in 1936. After Sydney’s death the house was sold to Thomas Letson. Thomas the treasurer of the Maine Fish Meal Company located on Union wharf. He and Eleanor Letson had one son, Stanley, who would follow in his father’s path by becoming the president of the Maine Fish Meal Company after Thomas’ retirement. Thomas died in 1964 and Eleanor followed in 1972. After her death, the house was sold to a psychiatrist named Robert Savadove and his wife Maureen. They lived there until 1998 when they sold it to the current owners. 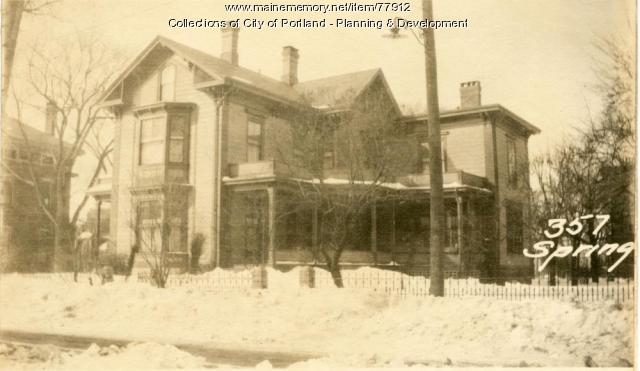 357 is listed as a single family residence. Condition is excellent. The owners are an antique dealer and his wife who is a former curator at the Winterthur Museum.