A simple, late period, Federal in the Park-Pleasant Street neighborhood

The Greater Portland Landmarks plaque attributes the house to Enoch Brazier and it is true that Enoch lived there in the 1840s and 50s. The Portland Historic Resources Inventory of 1976 simply lists 136 Pleasant Street as the ‘Brazier House, by 1841’. Again, this fits with the historic record. The thing is, Enoch never owned the property. In fact, according to the Cumberland County Registry of Deeds, Enoch never purchased, sold, or mortgaged any property. Evah!

Along with the issue of neither Enoch nor his wife, Pheobe ever owning property in the city is the date.  It just doesn’t ‘feel’ right for 1841. It does feel right for a period some 15 or 20 years earlier. In some ways, it looks farther back and would not be out of place in late 18th century Newburyport MA. And that is where Joseph Ilsley came from when he arrived in Portland in 1794. By 1823 Joseph was living on Pleasant Street. in 1834, Joseph and Pheobe Ilsley’s daughter, also named Pheobe, married Enoch Brazier.

Enoch Brazier was born in Portland in 1806. His father, Harrison, was a lumber dealer who became a Surveyor of Boards for the town of Portland in 1807. It was a position that became full-time during Portland’s heyday as a lumber export leader. Enoch followed his uncles, Daniel & George, to sea. By the 1840’s he was a shipmaster in his own right. He captained the Eliza, a bark built and operated out of South Freeport by Enos Soule. In 1842 a daughter, Lucy Ann, was born. Enoch’s journeys were primarily to the Indies with Matanzas & Cardenas being two common ports. The January 20, 1848 issue of the Northern Tribune of Bath noted that Enoch and the Eliza had been reported in Cardenas where the ship was loading before returning to Portland. 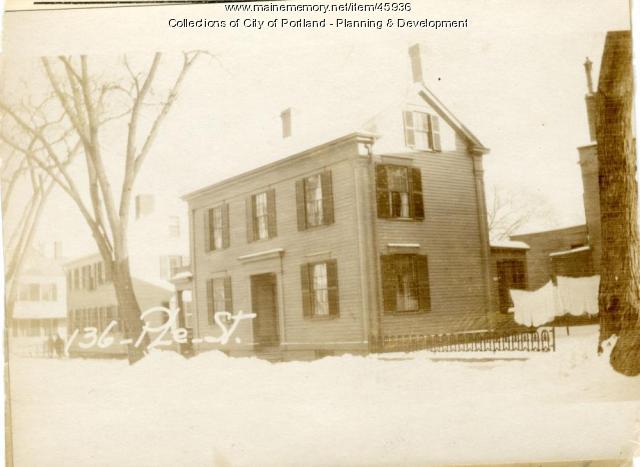 Pheobe Brazier died on January 22, 1852. The cause of death was, no surprise, consumption. She was 44 years old. After her death, Enoch and Lucy moved into the Brazier family home on Locust Street. Enoch died in Havana on February 1, 1856. He was 50 years old. He and Pheobe were buried in the Ilsley family plot in Western Cemetery. Joseph sold 134 Pleasant Street to Ansel Vaughan in 1857 and moved to Franklin Street. In 1860 Joseph was named guardian of Lucy Brazier. She died in 1909.

The main section of the house is a block measuring 37′ on the street and 24′ deep. There is an open porch on the northeast and enclosed porch southeast sides. There is a 10′ x 17′ single-story addition on the northeast rear. It is two stories with an attic in the garret.  The details are simple but well-executed. Boxed, engaged, pilasters mark the corners and are capped with built-up capitals. These carry a flat entablature with a simple cornice. The entry, nicely recessed, carries the details of the main body but the entablature is complete. The portal has the same trimmings. The sidelights are very simple and probably newer.  The windows have flat casings that carry simplified versions of the entry entablature.

136 Pleasant Street on the 1886 Sanborn Insurance maps. Library of Congress

A lumber dealer named Ansel Vaughan was the first of 4 owners between 1857 and 1865. Another short term owner was a wholesale grocer named Charles Brown. Brown and Vaughan both lived in the same boarding house around the corner on Park Street in 1860. John Bundy Brown owned it for 4 years before selling it to a photographer from Parsonfsfield named John Usher Parsons Burnham in 1865. The Burnham family would own 136 Pleasant Street for the next 85 years.

John U P Burnham was born in 1823. His father, Asa, was a farmer and his mother, Lydia, was a Parsons and a descendant of the original settlers of Parsonsfield. He married Charlotte Gilman in Bangor in 1848. They had 5 children, Katie and Harriet in 1854, Etta in 1856, Charles in 1861, and Mary in 1864. They had been living on Gray Street prior to purchasing our subject. John had a studio and storefront on Middle Street between Frankin and Chatham Streets. He was joined by his brother Thomas.

John U P Burnham was a restless soul. Various sources show him in several locations in the 1860s and 70s. The 1860 census showed the family on Pleasant Street. An advertisement in the June 23rd edition of the Portland Daily Press for Thomas’ Photography Studio, seen above, said John had “gone to New York” The city directory of 1863 said they were living on Pleasant Street. Thomas moved to Boston in 1865. In 1866, John’s studio and all its contents were destroyed in the Great Fire. Demoralized, John and Charlotte applied for and received a passport on October 3rd. The passport gives us a bit of a picture of John in his description. Sadly, there is nothing to describe Charlotte but her age. John User Parsons Burnham was 5′ 8″ tall. Medium build with an ‘oval’ face. He had light hair and blue eyes. They traveled to Cuba although where they went while there in unclear.

By 1870 the Burnhams were back in Portland in time for the census. They didn’t stay long. In 1870 and 71, John was in Savannah Georgia. It seems like an odd place to try his hand at first but a relative had been successful in railroads in the area so that may have been a draw. An article at Hunting and Gathering has some of Burnham’s ferrotype photos and advertisements.

John was working out of the house on Pleasant Street when Sylvester Beckett’s canvassers came by to update the city directory for 1873-74. It could be that the 10′ x 17′ addition of the rear was built at that time for John’s studio but that is conjecture on my part. I have not found John or Charlotte in the 1880 census but other information would point to them still being in Portland. That information came in the form of a mention in the note in the Portland Daily Press of September 4, 1892. It stated that John had developed a pain in his leg on ‘election day’ and efforts to relieve it had failed. It was determined to be a blood clot and the chosen course of treatment was amputation! The paper also noted that Charles had rushed home from New York to see his father and upon arrival had been struck with ‘facial paralysis and nervous prostration”. John did not recover and died on September 30.

Charlotte, Harriet, and Mary remained at 136 Pleasant Street. Charles died in New York in 1900. Harriet died in 1907 and Charlotte in 1908. Mary lived in the house until her death in 1948. She took in the occasional lodger and had a housekeeper but lived mostly on her own. After her death, the property passed through several, mostly absentee, owners before being purchased in 1976 by Neva Cram & Kerry Drach.  Cram was the first Executive Director of Ingraham Volunteers and a long time advocate for better mental health care in the state. She was also involved with Friends of Feral Felines, Greater Portland Landmarks, and the Victoria Mansion along with other organizations. She died of breast cancer in 2012.

136 Pleasant Street is listed as a single-family residence. Condition is very good.

136 Pleasant Street on the 1886 Sanborn Insurance maps. Library of Congress