A much-altered  Second Empire on the Eastern Promenade side of Munjoy Hill.

When we think of the ‘age of sail’ we think of wooden ships with canvas sails and maybe ropes and lines. Often missing in our contemplations is iron. From chains to pins, clasps, hooks, and nails, a wooden boat had a lot of iron in it. Iron items such as these required the skills of a blacksmith. For most of his adult life, Charles Stanwood was a blacksmith and ship ‘ironer’ on the Portland waterfront.

Charles was born to William and Jane Stanwood in Brunswick in 1830. William was a ship-captain. Both William and Jane came from old Brunswick families. After attending local schools, Charles learned his trade from a local smith named Thomas Knowlton then worked in local shipyards. He married Maria Ross, also from old Brunswick stock, in 1851. Their first child, Charles Henry, was born in 1852. In 1853, William died and Charles and his family moved to Portland where he took a job with the Portland Company. They had 3 more children, Robert, Jane, & Alberta, by the end of the decade. 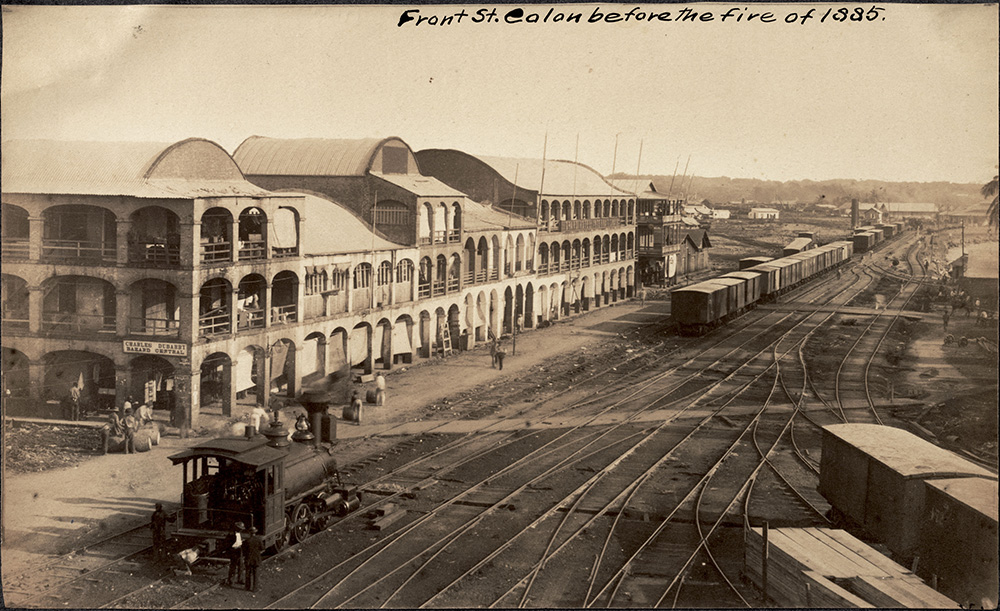 Aspinwall or Colón, the Atlantic terminus of the Panama Railroad. Lindahall.org

In the first half of the 19th Century, westward travel and commerce were limited by the time and risk involved in crossing the bottom of the South American continent. A pack train existed over the Panamanian Isthmus but it was unreliable and subject to raids. In 1845 a group of New York businessmen formed a corporation with the intent of building a railroad across the isthmus along much of the old pack route. With the discovery of gold in California in 1849, the need for a railroad became acute. In 1850 construction was completed with the first trains crossing that same year. In 1860, Charles Stanwood packed his family up and moved to Aspinwall, now Colón, to work for the Panama Railroad. 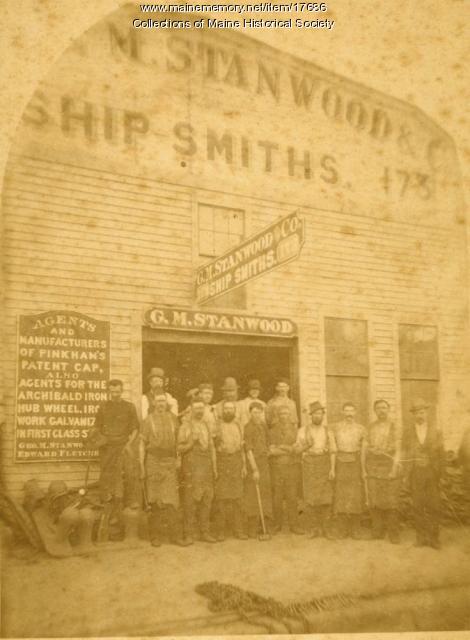 In 1863, Charles Stanwood returned to Portland with his family. He purchased a shop on Commercial Street and went into business with his brother George. In April of 1864, he purchased our subject property from Margaret Spaulding. The deed for this sale creates a bit of an issue with dating the house. It states “land and buildings thereon”. That implies there was something there. Margaret’s husband, John D Spaulding, was a joiner or carpenter. To me, this begs the question, did John build the house? If he did, was it for Charles, or was it ‘on spec’? Another issue with Margaret’s deed to Charles Stanwood is the deed referenced for her purchase of the property in 1855 actually regards a property on Tate Street not here on the ‘Hill’. As of yet, I cannot find a deed for either Margaret or John purchasing our subject lot.

12 Beckett Street on the 1876 Bird’s Eye view of Portland. Library of Congress.

Charles and George Stanwood ran their shop at 173 Commercial Street until 1873 when they dissolved their partnership. George continued at 173 while Charles opened his own shop in a new building on the corner of Commercial and Cross Streets in 1874. In 1879 Charles experienced a financial disaster when his business failed. To partly finance the firm, he had mortgaged the house and property twice. There was $1000 from the Portland Savings Bank in 1875 and $1000 from a Christopher Dailey. On March 10 of 1879, the Portland Daily Press reported that the firm was “reporting compromising”. On the 26th of March, Charles sold 12 Beckett Street to William G Davis. He and the family remained in the house for some time as Charles continued to serve as an alderman through 1880, as he had for the previous decade. In 1882, Charles was one of several hundred citizens who signed an open letter published in the Daily Press stating the current 8-week summer break for schools was too short and that it should be 11 weeks instead. The Stanwoods moved to Woodfords in the late 1880s. Maria died in 1895 and Charles in 1898.

Charles Stanwood’s shipsmith shop at the corner of Commercial and Cross Streets 1886. Library of Congress

William G Davis was James P Baxter’s partner in the Portland Packing Company and a very wealthy man. He never lived in our subject. He did build the, now forlorn, apartment block on the corner of Beckett and Eastern Promenade. He rented our subject until his death in 1903. In that same year, his son Walter sold it to Elizabeth, Lizzie, Merrill.

The original house is a little over 25 ‘ wide and stretches some 70’ back on its lot. It’s 2 stories tall and has some very oddly formed mansard roof lines. A low-hipped roof caps the building. Missing now but noticeable in the 1924 tax photo was a jig-sawed ‘bargeboard’ detail hanging from the facias of the front facade.

In its windows and door arrangments, 12 O’Brion follows the common ‘East Ender’ form with the entry portico on one side, usually the right, and a bay window on the other side. The bay is square and tall and is well molded. Square pilasters with reeded capitals separate the windows. The entry portico is under a roof held by hefty brackets. The brackets are made of two smaller units combined with a fillet molding between them. The fillet is held back from the plain of the brackets creating a shadow line and reducing the visual weight of the brackets when seen from the street. The entry door looks very similar to the unit in the 1924 tax photo and maybe original. Given the wear in the stoop, that looks like it has been there for quite a while.

Close up of worn stoop.

Elizabeth Helen “Lizzie” Dewey was born in Lubec Maine in 1853. Her father, Henry, was a merchant. The family moved to Portland in the late 1860s. Henry became a junior partner in Jacob Winslow’s firm.  Lizzie married a bookkeeper from Falmouth named Samuel C Merrill in 1874. In 1875, Marian was born. Rena Merrill was born in 1879. On December 21 of 1883, Samuel died of ‘brain fever’ which was probably meningitis or encephalitis.  On May 25, 1884, Lizzie gave birth to Clinton D Merrill. Lizzie lived with her father and step-mother Sophronia, until after Henry’s death in 1900. Sophronia was Jacob Winslow’s sister.  As noted, Lizzie purchased our subject in 1903. 1903 was also the year that Marian and Rena both married. 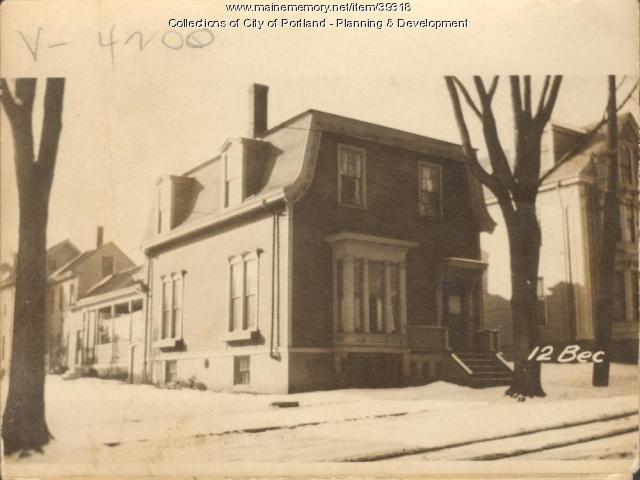 Lizzie Merrill lived at 12 Beckett Street until 1919 when she sold it to a conductor for the Maine Central Railroad named Harry Pomroy. Lizzie died in 1923. Henry and Ethel Pomroy were both from Dover-Foxcroft Maine. They lived in our subject until 1929 when they returned to Dover-Foxcroft. The purchaser in 1929 was Gertrude Jurgenson. Gertrude was born in Portland in 1888. Her father was a German immigrant and her mother was a Danish immigrant. She married Nils Jurgenson, a carpenter from Missouri of German descent, in Portland in 1908. They had 4 children, Herman, Donald, Virginia, and Russell. Gertrude worked as a private nurse. The Jurgensons lost the house to foreclosure in 1940.

in 1956, Beckett Street was discontinued between Wilson and Moody Streets. In the space created The Marada Adams School was built. At that time, the section of Beckett from Wilson Street to the Eastern Promenade, being cut off from the western section running from Moody to Congress Streets, was renamed O’Brion Street in honor of Thomas and Edward O’Brion.

Today, 12 O’Brion Street is a 4 unit condominium that was created in 2008. Condition is very good.