A solid late-period Greek Revival on the slope of Munjoy Hill.

Like it’s contemporary at 23 Waterville Street, 23 St Lawrence Street has to deal with the steep slope of the southwest side of Munjoy Hill. Unlike Waterville Street where the lowest level was set in the bank and the two open sides thickened to withstand the force, here on St Lawrence Street, the house was set on the bank and a low basement was used to keep the height down. And for that, it towers above the street.

George Marston purchased the land for our subject from a merchant named Thomas Warren in June of 1850. Marston was born in St John, New Brunswick in 1805. He came to Portland sometime around 1830 and was naturalized in 1838. He married Patience Montgomery in 1833. Patience was a widow with a 5-year-old son, Charles when she married George. George was a shipwright when he first came to Portland but was specializing in making spars and masts by the mid-1840s. Charles learned from George and followed him into the trade.

The Marston/Montgomery house is a fine late-period Greek Revival measuring 26 feet on the street and 30 feet deep. There is a full-height ell with a smaller single-story unit behind that. The windows are deep and quite wide. All the vertical trim, window and door casings, and corner pilasters are simple but well-scaled, paneled motifs. The street front is straightforward with the portico on the left.

George Marston deeded 1/2 of 23 St Lawrence Street to Charles Montgomery in early 1860. He died of consumption in August of 1868. Patience had outlived two husbands and lived on until 1880. On her death, the property passed to Charles as her heir but there was no will or deed transfer. Charles had married Hannah Lowell in 1855. Hannah died of consumption in 1873. Charles lived until 1901. It wasn’t until 1930 when their children sold our subject that the ownership history was documented. 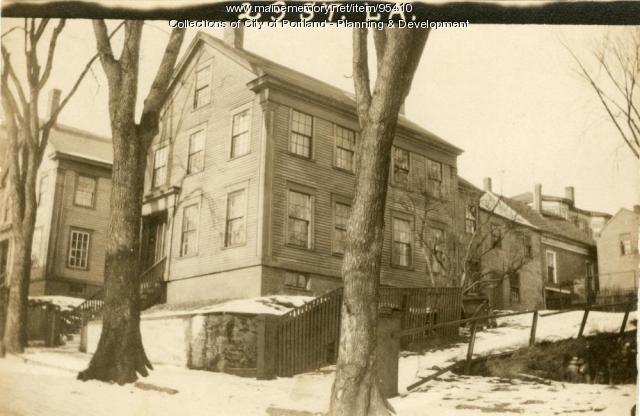 2 of Hannah and Charles’s sons, John & George, opened a shoemaking shop on Pearl Street. They lived in our subject with Charles until around 1890 when their sister Sadie, who had married William Holden,  the treasurer of the International Steamship Company, in 1887, moved in with her family. The brothers moved to Beckett Street. Sadie and William lived there and raised 4 children until 1916 when they moved to Vesper Street. They rented 23 St Lawrence Street to a machinist for the Grand Trunk Railroad named Joseph Keeley and a widow named Mary Hallett.

In October of 1930, the Montgomery heirs sold 23 St Lawrence Street to a lithographer named Martin Lyden. One month later Lyden sold it to Harland Haney. Haney was originally from Prince Edward Island who, according to his alien registration of 1940, had come to the US with his parents in 1890 when he was 7. He is shown as living in our subject from 1931 through 1933 but what he did is not noted. In 1940 he was farming in Buxton. In 1933, Haney sold 23 St Lawrence to one Ida Knox of Buxton. One month later, she sold it to Martin Lyden. Lyden took a mortgage on the property on which he defaulted in 1936. The Cumberland Savings and Loan foreclosed on the property at that time.

The Cumberland Savings and Loan retained ownership of 23 St Lawrence Street until 1942 when the economy had recovered. During the years the bank owned our subject, there were several tenants. They included a fisherman named Charles Lambert and his wife Petra, Joseph & Elvira Manley, & Robert & Violet Doughty. The purchasers in 1942 were Albert and Helen Gerber. Albert was born in Kansas in 1886 and Helen in Portland in 1889. Albert had served as a fireman in the Navy for 8 years and was disabled during his service. He was living in Antioch California in 1917 when he registered for the draft. He married Ida Chevenair in Gardiner in 1920. What happened to that marriage is not recorded. Albert and Helen married in 1928 and had no children. Albert worked as a laborer for various concerns over the years. The Gerbers lived in our subject until 1946 when they sold to Leo and Louise Fose. Leo died soon after the purchase. Louise Fose remained at 23 St Lawrence Street until her death in 1976. She left no heirs. Her half brothers and sisters and a niece sold it to the current owners in ’76.

23 St Lawrence Street is listed as a single-family home. The condition is excellent.