A small Greek Revival in the West End Neighborhood.

Patrick escaped the Great Hunger. He arrived in New York on April 10 of 1852. One of 232 men, women, and children aboard the barque “Affghan” out of Glasgow under the command of one A. L. Black. Patrick may have been the elder brother of Neil McCafferty who was born in County Donegal Ireland in 1836 and immigrated to the US via Portland in 1854. Neil’s naturalization application of 1860 was witnessed by one Patrick Deehan. The Deehan family was well known for aiding new arrivals from Erin. Deehan’s daughter, Bridgett, married Patrick McCafferty in 1862. In 1863, Margaret Ellen was born to the couple with Frank following in 1866. A third child, John, was born in 1877. 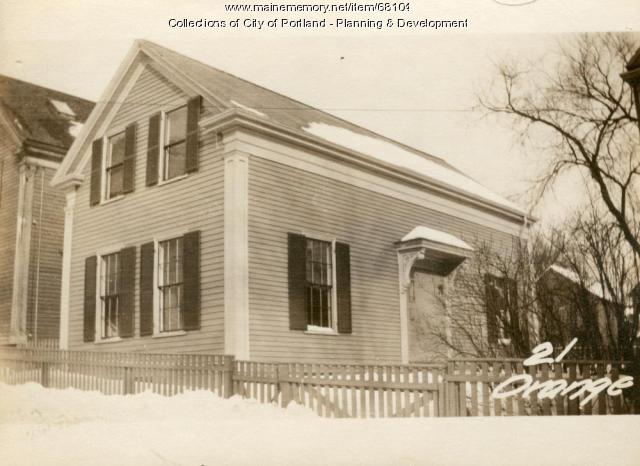 In 1867 Patrick and Bridget purchased 21 Orange Street from John McKenney for $1600.00. Mckenney was a blacksmith who lived on State Street. He had purchased the land from JB Brown in 1865.

The main block of the house is 18′ wide on the street and 38′ deep. There is a 2nd floor in the garrett and a 14′ x 16′ ell extends from the northeast corner. There are boxed pilasters with Doric capitals at the corners which support a full entablature. The windows have simple Doric trimmings. Late 19th century brackets support the hood over the entry.

The McCafferty family’s life on Orange Street was brief before tragedy came calling. In late 1878, Patrick contracted the dreaded consumption for which there was no cure. He died on April 22, 1879, at the age of 52. He was buried in Cavalry Cemetery.

Bridget McCafferty and the children stayed at 21 Orange Street after Patrick’s death. Bridget died of heart disease in 1892. Although there is no probate on file, other information indicates that the children inherited the property. The 1924 tax roles list it as being owned by the “heirs of Patrick McCafferty. The city directory for 1910 lists all 3 living here. By 1926, it was Margaret alone.

The McCafferty children all died between 1928, Margaret, and 1936, Frank, with John passing in 1932. Frank’s will passed 21 Orange Street to Mary Flanigan. Bridget McCaffert’y’s mother was a Flanigan leading me to suspect Mary was a first or second cousin to Frank et al. On Mary’s death in 1943, it passed to her cousin, Ann Dooley. Ann and her husband lived at 23 Orange next door. In 1957, Marion W Tracy purchased the home from Ann Dooley’s estate.

Marion Willard was born in 1906. She married Martin Tracy in 1923 when she was 16 or 17 years old. In 1924, she gave birth to a son Herbert. In 1926 Leo followed. By 1930 Marion and the boys were living in South Portland with her widowed father. Martin Tracy was living on Ocean Street in Knightville so, we can surmise, that the marriage did not last. Marion lived in South Portland until the early 40’s when she moved to lower State Street just off York. She lived there until she purchased our subject. Marion worked for a couple of decades as a finisher for the Schlosberg Furs. 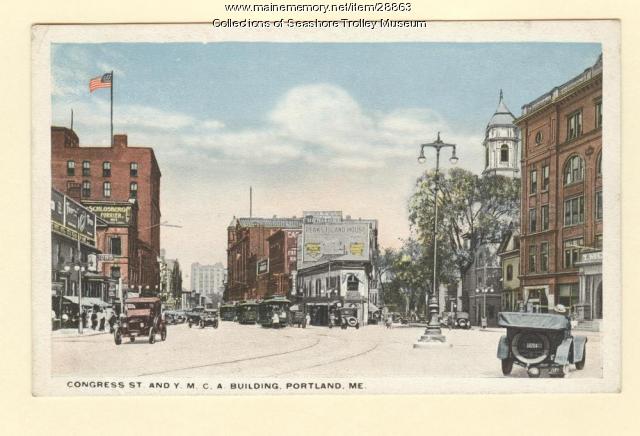 Marion Tracy sold 21 Orange Street in 1975. She died in 1990. The property changed hands 3 times before the current owners purchased it in 2011.

21 Orange Street is currently listed as a single-family home. The condition is excellent.