An interesting transitional home in the lower block of State Street

The neighborhood was much, much different in Captain Cook’s day. Not that Captain Cook but Francis Cook was a captain nonetheless. Judge Preble lived across the way in the old Ingraham house and the Dunlaps lived in the big brick house on the corner of Danforth Street but that was about it for houses on the block. In those days, State Street continued through York Street and ran to the Fore River.

Granite is strong stuff. It’s been used as a building material for centuries. From City Hall to the First Parish Church, to curbs and cobblestones, we see it all over Portland. One place where we rarely find it used, other than window lintels and sills, is in houses. The only other house I can think of using this much granite is John Neal’s house of 1836 farther up State Street.

Unlike John Neal, who owned a granite quarry, Francis Cook only used stone for the front of his house and brick for the side and back walls. Now why Cook used granite and where he got it from is a mystery. Also unlike Neal’s house with its smooth surface and tightly fit joint work, the stone on our subject shows a hammered finish and is laid with much thicker joints.

The house is 40′ wide on the street and 29′ deep. A 26′ wide wooden ell projects nearly 40′ off the rear. I refer to the style as ‘transitional’ as I have a hard time fitting it into any specific category. The massing is tight and tall in a Colonial manner. A feeling heightened by the slight projection of the second floor. The arrangement of windows and doors is ubiquitous in several styles dating to the late 18th and early 19th centuries. The double windowed dormer hints at a full 3rd story in the garrett.

The current entry is probably not original but is probably late 19th century. The pedimented portico was added after 1880 or so as seen in this image from that period. The poorly matched and laid granite plinths supporting spindly columns are another clue.

Francis Cook was born in Friendship Maine in 1796. He grew up by and on, the sea. He served for precisely 69 days in the War of 1812 and received a land grant for his service in 1855. He married Mary Bradford Morton in Lubec in 1824. The Cooks had 6 children 5 of whom were born in Bremen, Francis’ home-port, and the last in Portland in 1839. That was the same year he purchased a lot on State Street from a hardware dealer named Henry Goddard for $1000. The lot covers #s 52 & 54 State Street. Cook built a second house at #52 concurrent with our subject but we will leave that one for another day.

Francis Cook was a shipmaster for many years. He ran the packet route between Portland and New York City for several years but spent most of his time sailing the East Coast and the Indes. The Portland weekly Advertiser for October 26 of 1846 noted the barque ‘Franklin’ newly built in Bath had cleared for Baltimore with Francis in command. Before the ‘Franklin’, he had been commanding a barque named ‘Mary Frances’ which was also the name of the Cook’s third child.

Francis and Mary Cook resided at 54 State Street until their deaths in 1877 and 1876 respectively. After their deaths, the property was passed to the children who deeded it to Susan, the 4th child, in 1880. Susan had married a hat seller named Alphonso Gilkey in 1855. The Gilkey’s lived a couple of blocks away on Winter Street.

After Mary’s death, Francis took in borders and then rented the second floor. After his death, the family rented the entire building until 1887 when Joseph Gilkey moved in. He was born to Susan and Alphonso in 1858. He was one of 77 boys and 81 girls admitted to Portland High School in 1871. Interestingly, 11 boys and 3 girls were rejected. One who was accepted along with Joseph Gilkey was a 12 year-old girl named Isa Evans who the news reported

“Answered every question correctly. An incident that has not occured before for fifteen years” 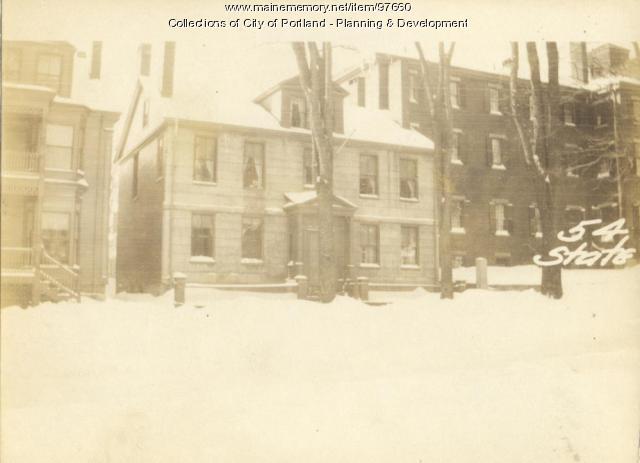 After high school, we can assume Joseph went to college but where that was is not recorded. What is certain is that he, in time joined his father in the hat business. He married Ada True of Trenton Maine in 1886. They had 2 daughters, Ada and Marguerite. The Gilkeys lived here on State Street until 1904 when Joseph died suddenly at the age of 46. Ada and the girls stayed at 52 State Street and Alphonso moved into 54 State. When Susan Cook Gilkey died in 1909, her will passed 54 to Elizabeth, Susan, and Aphonso’s youngest child. She had married a civil engineer named Harry Merriam in 1891. The Merriams lived in Yarmouth.

54 State Street on the 1886 Sanborn Map. Library of Congress

In September of 1920, Elizabeth Gilkey Merriam sold 54 State Street to Nina Kidd of Portland. 12 days later, Kidd sold it to Grace Allen of Portland. In March of 1921, the property was sold to Roscoe Gould and Merie Reillay of Portland. Merie and Roscoe’s history is murky. They were widow and widower respectively. Merie was born in Canada in 1880. Roscoe was born in Ellsworth Maine in 1874. Who and when either they each married, or when their spouses died, is unknown. The 1920 census found Merie managing a boarding house on Park Street with her 21-year-old son David. In 1930, Roscoe worked as a traveling salesman. In 1930, Merie and Roscoe married and Casco Bank foreclosed on their mortgage for 54 State Street.

After foreclosing on 54 State Street in 1930, Casco Northern Bank retained ownership until 1941 when it was sold to the tenants at that time, Edward and Vivian Niece. Edward worked as a bookkeeper for the State of Maine and Vivian, along with their daughter Blanche, took care of the house and managed the boarders in the house. The Niece’s sold 54 State Street in 1947. The purchasers were Helen and Roland Cheney. Roland ran a diner at the foot of Danforth Street about where Yosaku Restaurant is now. Helen took care of the boarding/rental business. The Cheneys lived here until 1962.

54 State Street is listed as a 5-7 family apartment building. The owner is listed as an LLC in South Dakota. The current condition is good.