A modest Greek Revival double-house in the Munjoy Hill Neighborhood

The northeast slope of Munjoy Hill saw little development prior to the Great Fire of 1866. Streets such as Vesper and Morning are mostly populated with ‘East Enders’ and other later 19th century designs. Every once and a while though, you find an outlier from an earlier time.

The northeast corner of Munjoy Hill in 1851

The northeast corner of Munjoy Hill in 1857. Our subject is highlighted.

John Weeks was a joiner who lived on nearby Beckett Street when he purchased the land from Sylvester Beckett in the late winter of 1855. The 1856 directory, published by the aforementioned Mr. Beckett, lists Weeks on Beckett Street, while a joiner named Jeremiah Gardner, a foundryman who likely worked at the Portland Company named William Mills and a painter named Stephen H Norton were living in our subject which was numbered 17 and, as seen above in the clipping from the Chase Map of 1857, the only house on the street.

As far as simple Greek Revival houses go, this may be the simplest. But for the recessed entries with full entablatures, high posting, deep windows, and overall massing, you would be hard-pressed to attach any particular style to it.
The current siding of cedar shingles is unfortunate as it tends to create a busy surface that is somewhat mitigated with clapboards, see the 1924 tax photo below, but is best handled with matched siding as seen on Cumberland Avenue. Another change notable from 1924 is that the windows now have full Greek Revival casings. 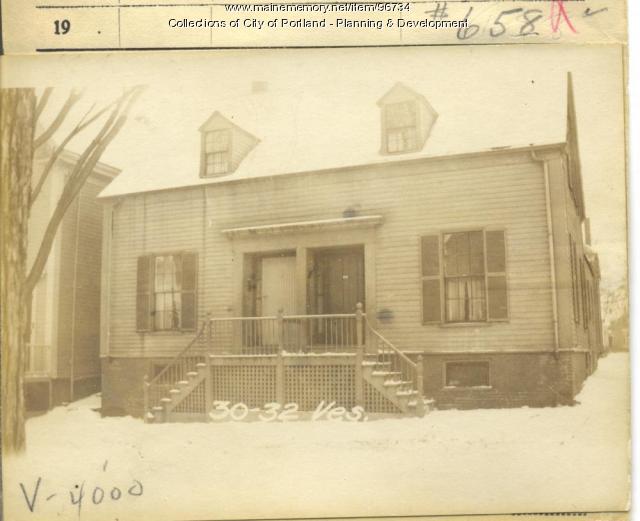 By the publishing of the 1858 city directory, everything had changed. All three of the residents of 1856 were gone. In their place were John Weeks, his son William and a machinist named Charles Cobb. Things changed again in March of 1859 when Sylvester Beckett foreclosed on the #32 when John Weeks failed to make payments on the mortgage he took when he purchased the land. Weeks was able to negotiate a new mortgage but it was the start of trouble. In July of the same year, the city of Portland took possession of #32 for unpaid taxes and sold it off to one Charles H Haskell. In 1860, Haskell sold the property back to John Weeks for the exact amount he had paid the city for it. Are we all confused now?

I hope not because in 1860 it happened again. That March, the city took #32 for unpaid taxes and sold it to Charles H Haskell. This time, Haskell sold it to a merchant named Josiah Day. Day then sold to a machinist and gas fitter named Ira Winn. Winn then sold it to Daniel Emery of Gorham who sold it to Charles M Plummer. All of these trades took place over a 3 month period.

#30 Vesper Street was sold to Josiah Day in 1856. Day was a papermaker who, along with two of his brothers, ran a shop on Exchange Street. Day took a mortgage on his purchase which was, unsurprisingly, foreclosed on in 1861. George and Lewis Warren, along with Dana Brigham and Samuel Clemens, took possession of the property with Brigham & Clemens soon selling their shares to the Warrens who were merchants. They didn’t live here. The Warrens sold 30 Vesper Street to Charles A Plummer, Charles M’s son, in 1896.

Hanson’s Lane. A remnant of a bygone era.

Charles Moulton Plummer was born in Portland in 1828. He was the third of William and Abigail Plummer’s 11 children. The family lived on Casco Street while William plied his trade on Fore Street. In 1848 Charles married Miranda Snow Ridlon of Saco. She, like Charles, was 20 years old when they married.

Charles and his brother Hiram ran their business on Union Street for many years. Their activities would seem to have been numerous judged by the various mentions in the newspapers of the day. They sued and were sued. One case, in particular, from 1876 involved a steam boiler or ‘engine’ that Charles and Hiram rented for ‘experiments’ only to install it at Sebago Lake where they “ran it to its utmost capacity 24 hours a day”. When cross-examined on his knowledge of steam engines, the plaintiff broke down, withdrew his suit, and left the courtroom.

The dormers seem out of place. I suspect they are not original.

Charles and Miranda Plummer had 4 children. A daughter named Mabel died in 1856 at the age of 7. William was born and died in 1851. Charles Averill was born in 1856 and Minnie Snow in 1866. We might surmise that Minnie was a ‘surprise’ to her parents and brother. City directory and census information confirm that the Plummers did not live in our subject but resided on Middle Street. By 1924 the property was owned by Mary Plummer who was Charles A’s widow.

As the property was a tenement for most of its life, let’s take a look at some of the residents. As I have noted before, the city directories prior to 1880 did not contain street-level information making determining who lived in a house very difficult. Here on Vesper Street, I am going to start in the early 1880s.

In 1881 and 1882, Herbert and Emma Davis lived in #30. They had two daughters. Herbert was a brakeman for the Grand Trunk railroad.
After the Davis family moved out of # 30, George and Mary Card took up residence. The Cards were from Bowdionham where George learned the carpentry trade from his father. They married in 1856 and had 6 children. The 1880 census found them living in Yarmouth where George was working in a shipyard. They lived here until 1889 when they moved to the Libby’s Corner neighborhood. George continued to work as a carpenter but there is no information on where.
In 1882 Edward and Sarah Capen took up residence at #32 Vesper Street. They were both natives of the city. Edward was born in 1835 and Sarah in 1838. They married in 1860 and had 6 children 2 of them dying in infancy. Edward’s family name went back to early Massachusetts. He worked as a machinist at the Portland Company. The Capens lived at # 32 until 1896 when they moved to Atlantic Street. Edward died in 1909 and Sarah in 1929.

In 1903 a cooper named William Jackson lived in # 32. #30 was the home of Edwin and Lottie Edes. The Edes were from the Bangor area and had married in Portland in 1896. They had 2 sons, William and Leroy. Edwin finished furniture for the Thomas Beals Company on Market Street. By 1910 the Edes were living in Guilford with Edwin’s widowed father. 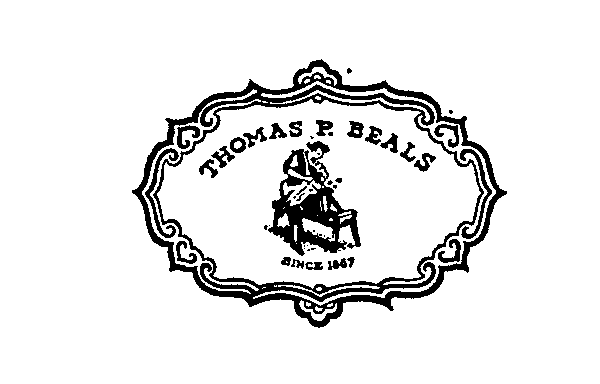 The 1910 city directory listed Charles & Grace Woodman lived at #30 Vesper Street. They had two sons, George and Charles Jr. Charles Sr. worked as a blacksmith for the Portland Company.
#32 Vesper Street was the home of William & Mabel Randall and their 3 children, Eleanor, Alberta, and Herman, all under the age of 4. Mabel’s mother Irene lived with them as well. William was a teamster.

The Plummer family owned 30-32 Vesper Street through WWI. When Charles A died in 1919, his widow Mary inherited the property. Her ownership is noted in the 1924 tax rolls. Their daughter Marion had married a bank clerk from Massachusetts named Clifford Emerson in 1906. After Charles’s death, they moved to Portland with their 3 children and Clifford became the treasurer of the Plummer family business. When Mary died in 1937, Marion inherited our subject.

The 1926 directory listed Moses and Eleanor York living at #30 Vesper Street. Moses was a clerk for the Plummers. They lived here from 1924 to 1927. it was a second marriage for both. They had no children.
At #32 Vesper Street was Howard and Ella Chase. Howard was a traveling salesman for a firm from Boston. They had no children. They lived here from 1923 until 1927.

In 1942, Renaldo and Florence Terroni lived in #30 with their 8-year-old daughter Ursula. Renaldo worked as a helper in the South Portland Shipyard.
#32 was the home of Perley and Evelyn Roberts. Perley was a painter for United Neon located on Elm Street. They had a son, David, who died in 1943 at the age of 10.

In 1949, Marion Plummer Emerson sold # 32 Vesper Street to Charles J Peters. The city directories for 1950 & 51 listed Charles & Elsie Peters here. Charles’ vocation was listed as “owning apartments at 140 Pine Street” and “real estate” respectively. Charles and Elsie married in 1949 as well. They moved to Gorham and rented #32 to some of Elsie’s family members before selling it to her brother Wallace Way in 1959. Way sold it to an Elizabeth Peters in 1964. She may have been related to Charles but I cannot determine that.
The history for #30 is not clear. Marion was listed as the owner in 1950 but the deed trail goes cold until the 1990s when it reappears when the properties were ‘reunited’. The current owner purchased them in 2010.

30-32 Vesper Street is listed as a two-family residence.The condition is very good.

The northeast corner of Munjoy Hill in 1851

The northeast corner of Munjoy Hill in 1857. Our subject is highlighted.