A well-known Italianate in the West End

Anyone crossing the Fore River from Knightville in South Portland to Portland over the last 100+ years knows this house. It stares at you when you sit at the light at the intersection of State and York Streets. But for a last-minute kink of the street to the right, you would run smack into the southeast corner of it. For a few decades, it was the site of a market with a name that lent itself to some ‘risque’ wordplay but we’re getting ahead of ourselves.

Stephen Dyer had grown up on the corner. His father, Nathaniel, built the brick house across York Street around 1803, and Stephen was born there in 1821. The family owned the property for our subject for many years and there were buildings on the site that Stephen removed to build his new home.

This is our first meeting with the architect Thomas Sparrow. Born in Stroudwater in 1805, he started out making pipe organs with a Standish native named John Phillips before changing vocations to become Portland’s first professional architect in the 1840s. Only 3 buildings have been definitively attributed to Sparrow, the Cumberland County Jail on Monroe Street since demolished, A house for Captain Reuben Merrill on West Main Street in Yarmouth, and Mechanics Hall on Congress Street. I guess our subject makes 4. Thomas Sparrow suffered a major stroke in late 1863 that left him partially paralyzed and an invalid. He died in 1871.

Stephen Dyer followed various trades over the years. He partnered in a grocery business on the corner of York and Brackett Streets for a decade or so before going into the shoe business with 2 men. That business dissolved in the late 1860s and Stephen was named city assessor. He held that post until 1885 when he retired. He worked as the wharfinger or wharf keeper for Union Wharf until his death in 1890. His obituary noted he was known for his “penmanship and accounting”

21 State Street is a nearly square block measuring 42′ on State Street and 43′ on York Street. It is two stories tall with a third under the hipped roof which is capped by a belvedere. The details as we see now are much reduced from the 1924 photo. The most notable change is the removal of the paneled corner boards. This alone qualifies it for a ‘remuddled’ badge. Also lost were the bracketed hoods over the secondary windows and the arched-top windows in the bays. 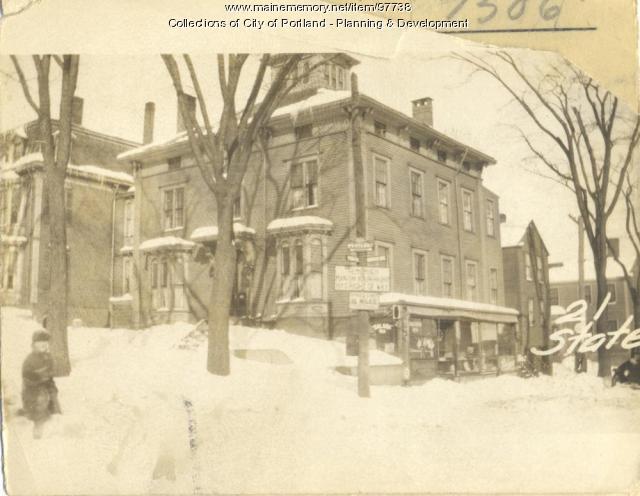 One final change from 1924 which would seem small but makes a major difference IMHO is the loss of the contrasting color on the architrave. This small line helped to organize the units of the design into logical parts. When combined with the loss of the corner boards there is no demarcation of the hierarchy of the sides. Also, that fine line delineated the point where the wall stopped and the entablature began. Now the entablature and roof seem to be mashed onto the walls.

Stephen Dyer was a long-time member of and active in the Second Advent Church. The church had a chapel on Grant Street for many years. He was also a member of the Odd Fellows. On August 14,1890 while in Auburn on IOOF business, he was stricken with a heart attack and died the following day. His obituary noted he had been “in poor health for some time” prior to his death. He was buried in Western Cemetery. The house on State Street had been transferred to Emily in 1867. She passed it to Emma in 1891.

The ell dates from between 1914 and 1924 based on it not being shown on the Richardson map of 1914 but appearing on the 1924 tax card. The change in window treatments and lack of details from the main block highlight this age difference.

21 State Street on the Sanborn Insurance map of 1886. Library of Congress

Emma Dyer married a physician from Auburn named Wallace Oakes in 1878. The ceremony and reception took place at 21 State Street. After Stephen’s death, Emily moved to Auburn and lived with Emma and her family. It was at this point that our subject became an apartment building.

Too bad the arched light in the second-floor window is no longer glassed.

The entry with its delicately arched-top double doors appears to be original if a bit downtrodden. A feeling prevalent in the entire building. The heavy, slablike, quality of the window trim adds to the sense of lost character. Credit to the owners/contractors for retaining the sliding windows in the architrave. As they’re no doubt thermally inefficient, the common action would have been to replace them with fixed pane insulated units. I’m sure the tenants appreciate the fresh air and ventilation they provide.

The former storefront on York Street may have originally been a confectionary. John Wallace Hall was a native of Charlotte New Brunswick where he was the 4th of 12 children born to Ebenezer and Sarah Hall. He arrived in the US in 1871 via the border crossing at Calais/St Stephens. By 1880 he was in Deering where he was working as a gardener. 1880 was also the year John married Annie Laughlin in Robbinston and received his naturalization papers. By the mid-1880s he was running his own confectioners shop on Congress Street while he and Annie were living on Myrtle Street. in 1886, Inez was born to the couple.

After spending much of the 1890s living at 29 State Street, the Halls, now with 4 children, moved into our subject in 1901. They would remain here through John’s death in 1905 from peritonitis. Annie and the family continued the business until 1911 at least, city directories are vague for the ‘teens’. Annie L Hall died in 1915. 1911 was the year Emma Oakes sold 21 State Street to a carriage manufacturer who lived in South Portland named Daniel McCann.

In 1912, Daniel McCann transferred ownership of 21 State Street to his wife Mary. In that same year, Mary took a mortgage for $1500 from a market gardener in South Portland named Reuben Higgins. The note was payable in 2 years with 8% interest. Also in 1912, Mary took a mortgage from the Portland Savings Bank for $3000. This note was to be paid starting in 1914 with minimum payments of $500 a year with the balance paid in 5 years at 5%. The next year she took a mortgage for $750 from Edward Carlton who was the treasurer of the Mercantile Loan Company in Monument Square. This note was due in 1914 with 12% interest. 3 months later, still in 1913, Mary took a final mortgage from Carlton for $350. This was to be paid off in 3 months at 12%. Edward Carlton demanded much for the use of his money. In 1914 Carlton, Higgins, and the Portland Savings Bank foreclosed. Somehow, once the dust had settled, Edward Carlton had emerged as the sole owner of our subject.

Edward Carlton was not immune to the lure of someone else’s money. In 1931, he took a mortgage from Portland Savings Bank against 21 State Street for $5000. It was to be paid in 1 year at 6% interest. Carlton must have gotten some forbearance as it wasn’t until 1937 that the bank foreclosed. The bank held it until 1941 when it was purchased by a Greek immigrant named Peter GIftos and his wife Florence. The Giftos ran a retail fruit market on Parris Street where they lived. They moved the market to York Street and rented apartments at 21 State Street. Some of the residents over the years have been:

Lastly, we return to the store name alluded to in the opening paragraph of the story. The Giftos family ran a store at 177 York Street for several decades. First Peter the elder then his son Peter ran the store. It changed over time from selling fruit to being a neighborhood variety store. it was called ‘Peter’s Handy Store’. For some that became “Handy’s Peter Store”.

21 State Street is listed as a 5 to 10 family apartment building. Ownership is listed to an estate planning firm in Austin Texas. The condition is good.

21 State Street on the Sanborn Insurance map of 1886. Library of Congress