A remuddled Italianate in the India Street Historic District.

You just have to ask “Why?”. Why go through the time, effort, and expense? All for simplification? It really is a puzzlement.

As the second of the two houses Jotham Lewis built after the great fire, 23 Hampshire lives in something of a shadow of its sibling next door on the corner of Newbury Street. It is the larger of the two but does not have the gracefully curved facade of the other. It is also devoid of most trim leaving it kind of bland to look at. 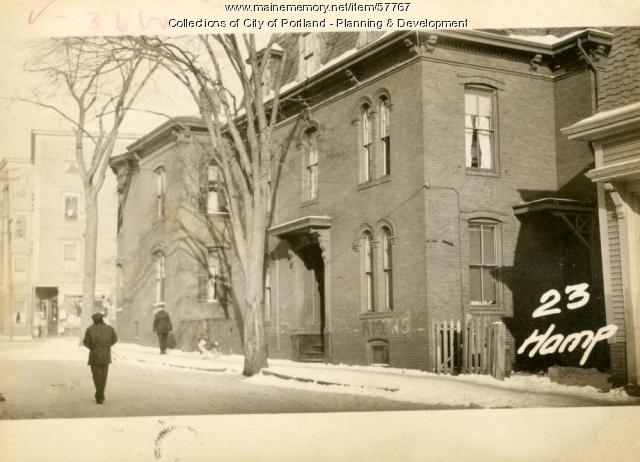 Jotham and Achsa Lewis lived at 23 Hampshire Street until the mid-1890s. They then moved to Spring Street where Harriet Lewis, Jotham’s daughter by his first wife, lived and practiced medicine. Harriet was born in 1856. She attended Portland schools and, like Jane Hersom, attended the Woman’s Medical College of Pennsylvania. Harriet lived, practiced medicine, and took in boarders, on Spring Street until her death in 1948

The garage is ‘modern’. It is no doubt a welcome feature in the gritty part of the city.

23 Hampshire Street has seen many tenants over the years. Even when Jotham and Achsa lived here, they took in borders. Some of those who came and went over the years were:

Enlargement of the 1924 tax photo

Sometime after 1924 substantial changes were made to the facade of 23 Hampshire Street. The 4 windows of the left and right bays were completely revised. Where once there were two windows in each opening now there is one. Also lost in that change were the paired, banded arches on corbeled brackets that capped the windows. Now we see simple, flattened arches matching those of the side facades. The window alterations broke the alignment of the windows on the facade. The basement and dormers no longer align with the facade windows Also lost were the entry hood and part of the supporting brackets. Replacing it is a metal flashing with “23” embossed in it. The center window with its heavy hood and major keystone is still with us.

After Jotham Lewis’ death, 23 Hampshire was passed to Harriet. In 1906, she sold it to Philip & Esther Shelling (Shilling). The Shellings were Russian Jews who came to the Us in the mid-1890s. They had lived in New York City until purchasing our subject. Philip would appear to have had health issues as the 1910 Census listed him as an ‘invalid’ and he died in that same year. Esther stayed here and served on the board of directors of the local Hebrew school until 1922 when it was purchased by Leah Wise. Leah and her husband Abraham, who was a cobbler, and their daughter Emma were Polish Jews who had lived in England for a decade, where Emma was born, before coming to the US in 1909.

In 1928 Leah Wise sold 23 Hampshire Street to Mario Massaro. Massaro sold it 6 months later to Carmine & Marcia Napolitano. Carmine was an Italian immigrant who sold cigarettes. Marcia’s family were Russian Jews. The Napolitanos had a daughter, Phylis. They took 3 mortgages when they purchased the home and, you guessed it, the home was foreclosed on in 1931. They continued to live here until Aniello & Giovanna Palotta purchased it from the Portland Savings Bank in 1936. The property remained in the Palotta families’ possession until 1984.

23 Hampshire Street on the 1886 Sanborn Insurance Map. Library of Congress

23 is a 3-unit condominium building. The condition is very good.

23 Hampshire Street on the 1886 Sanborn Insurance Map. Library of Congress

Enlargement of the 1924 tax phoro

The garage is ‘modern’. It is no doubt a welcome feature in the gritty part of the city.