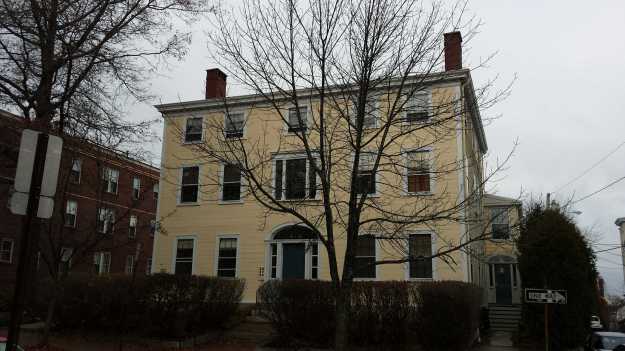 William Minot is a bit of a mystery. He is on 4 deeds dating from 1801 to 1809. The last being the sale of our subject to one Thomas Motley of Boston. William purchased the lot for his house from Arthur McLellan in March of 1803 at which time he was listed as a housewright.

And what a housewright he was. Built in the latest of styles, the house is very well proportioned. The windows are nicely balanced and scaled as they progress upward. The builder was restrained with ornamentation and the building is the better for it. The reed detail of the columns flanking the door and sidelights is refreshingly varied and shows it was hand-carved. The fanlight above has some remarkably fine ribbing and is closed with a very crisp molding. Bonus points to Mr. Minot for not going “full Palladian” in the second-story window. 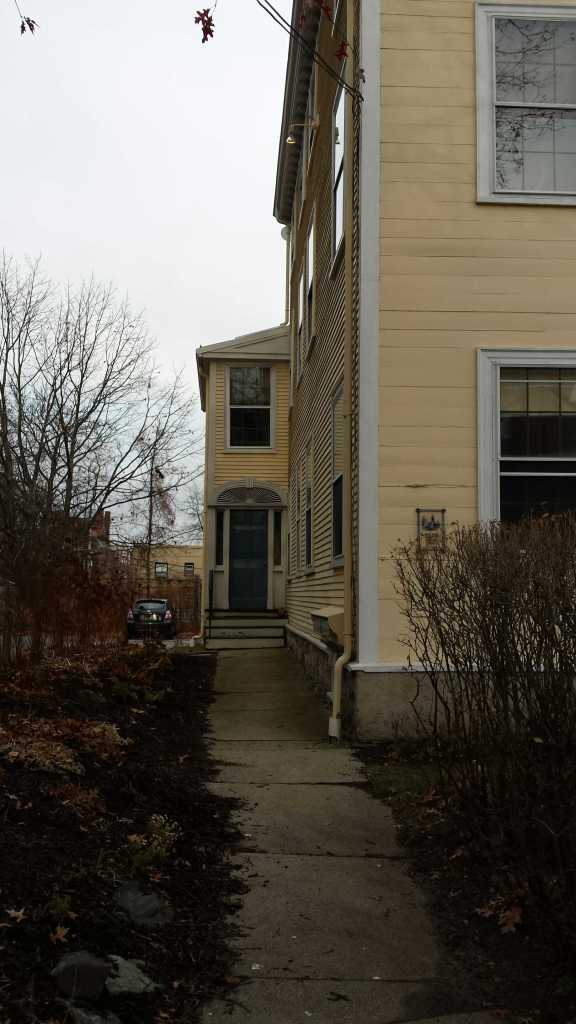 These lovely side entrances are an interesting feature. They are well scaled and carry the motif of the main entrance albeit with less detail. As for their function, it is my belief that the house was always a multi-family, it’s quite large, and these provided access to the rear units. Also worthy of note in the image above are the matched siding on the main facade with close laid claps on the other sides. Thomas Motley is noted on a deed of 1789 as an innkeeper. By the time he purchased our subject, he was listed as a ‘gentleman’. He appears on several more property transactions none of which involves 45 Park Street. From 1809 to 1898, when George Edwards sold it to Clarence Baker, the ownership history is murky in that I cannot find any records of it changing hands at all. 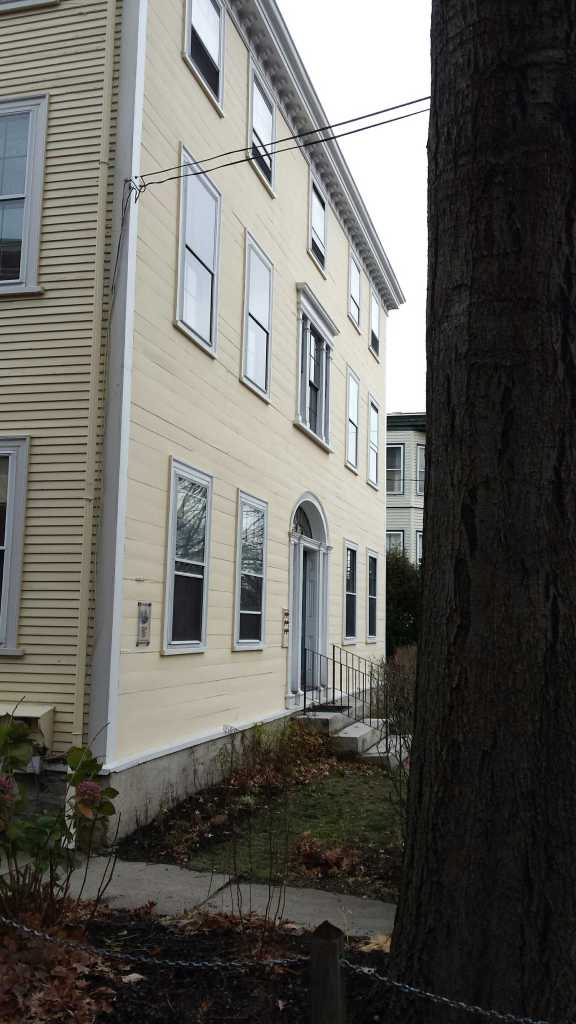 George Edwards seems to have been involved in the selling of properties that had been foreclosed on due to back taxes. He appears on 232 deeds where he transferred properties to others between 1893 and 1923. Several mention taxes owed. He appears on only 8 deeds where he received property in this same time. A few of the deeds also note an Arthur Marks as a grantor along with Mr. Edwards. Arthur Marks was indeed involved in selling foreclosed properties. His name appears on dozens of transfers of property specifically noted as tax foreclosed. 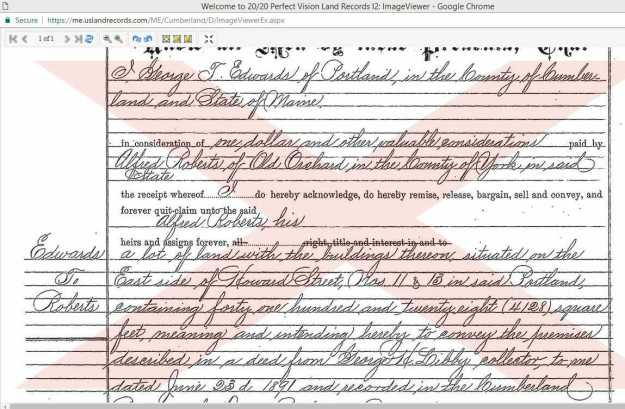 FindaGrave.com lists Dr. Clarence A Baker being buried in Evergreen Cemetary on his death in 1934. His age is given as 82. This would be the Clarence Baker who was 48 years old when he was tallied in the census of 1900. He was the owner of record in 1924. In 1926 Baker sold the property to Clifford Finnimore. By the end of the year, Finnimore would take out two mortgages against the property for a combined total of $9500.00. The 1924 valuation being $7994.00. He would transfer the property to Melville Kent Jr in September of 1926. This deed notes both mortgages and unpaid taxes for the current year. 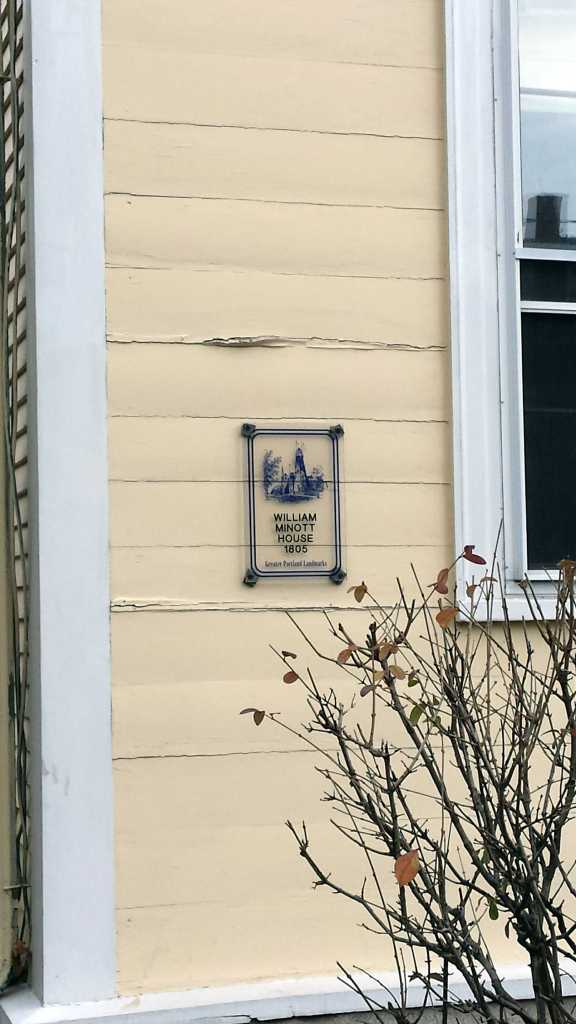 Melville Kent Jr, judging from his history with the Registry of Deeds, seems to have been what may be termed today a ‘foreclosure’ specialist’. He appears on countless transfers of property, some of which state the property was foreclosed. In fact, in 1921, Kent, whose residence was listed as Falmouth at the time, and one Sherman Gould of Portland executed 3 foreclosures in one day. All on mortgages held by the Portland Savings Bank. The very same bank that held the largest mortgage on our subject when Mr. Kent purchased it.

And so it continued. By the close of 1930, the property would change hands 6 times and be encumbered with almost $15,000.00 in mortgages and more unpaid property taxes. It then, once again, disappears from the registry of deeds for another 50+ years before reappearing in 1983 when it was registered as the South Park Condominium. It is currently 6 condo units.

1 thought on “45 Park Street. A Federal era gem with a turbulent history.”