As we have seen in previous posts, the introduction of trolley and omnibus service in the 1880s & ’90s opened large tracts of former farmlands westward off the peninsula to development. Our subject is part of this trend and puts us back in touch with Mr. Llewellyn Morse Leighton.

1899 was the year that Portland annexed Deering Village and set the boundaries of the city as we know them today. Glenwood Avenue was part of Deering, being set off in 1897 according to plans filed by Annie Jordan and Charles Dalton. Jordan was the wife of Alvin Jordan who was listed as a builder/mason in 1877. She was born in New York City around 1845 and died in 1926. Dalton was a native of Deering. He was born to Napoleon and Susan Dalton in 1867. He seems to have been quite active in local real estate based on the mountain of deeds, many with Leighton and Jordan, he was attached to over his 74-year life.

The house is an eclectic mash in the Queen Anne style. A high capped roof with a dormer nestles over the first-floor turret while a 6 sided bay strongly projects from the south side. Siding is shingled with a decorative band between the floors of the bay. An experienced eye will note the rooflines of the turret and bay do not connect comfortably when viewed from the southeast and east. More on that later..

Up front there’s even more to see. The gambrel roof is a nice touch and gives a hint of shingle style. The dinky palladian window in the peak is cute but far too wide for its height. the arched window on the second floor is not a door. Rendering the balustrade above the entry porch is decorative only and a maintenance issue. The single double-hung window of the second floor is obviously functional but seems kind of alone up there.

The house is set on a fairly high table. This is partly to handle the sloping site but I wonder if rock or water table conditions may have necessitated a fairly high basement. Regardless of why your’s truly is not convinced it helps the presentation of the house.

Llewellyn Morse purchased the land from Charles Dalton in 1899. He bought a pair of larger lots and created three new lots which he then sold off. Our lot was sold to Susan Heaton in July of the same year. We can only assume that construction started the same year.

Susan Heaton was born in New Haven CT in 1841. Her family was among the early settlers of the region. What I find interesting about Susan is her entry in the 1900 census. She is listed as widowed and the head of the household. The only other member of said household is a Julia Schwab who was 39 years old and born in NYC. Julia is listed as a ‘female partner’. This is the first time I have encountered such a designation. Were Susan and Julia domestic partners 100+ years ahead of their time?

Susan transferred 30 Glenwood to Julia’s sister Frances and her husband John in January of 1918. On the same date, Julia transferred property on Long Island to Frances & John as well. Neither Susan nor Julia appears in the registry of deeds after this date. In fact, they disappear from the record completely after this date. I can find no record of death for either. Frances and John sold the home to Ella Baker in December of 1918. Ella was born in Portland in 1847. She married George Hobbs in 1871 but had been granted a divorce in 1874. She and their son Charles would take her birth name of Baker at that time. 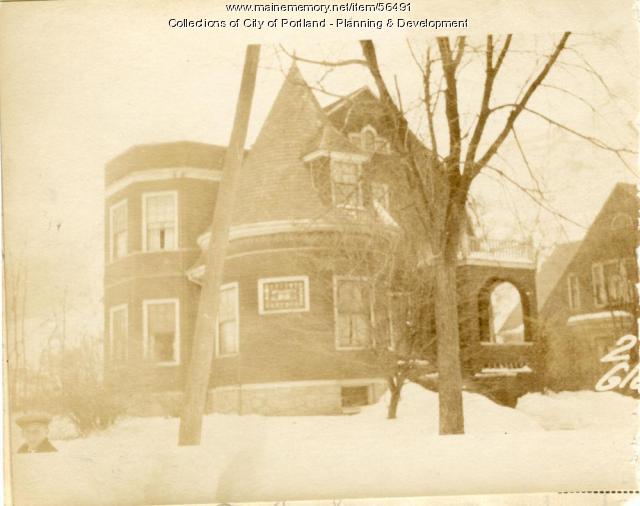 30 Glenwood Ave in 1923. Note the young man popping his head above the snowbank at the lower left. Image property of Maine Historical Society.

The tax photo gives a possible explanation for the seemingly misaligned roof levels in the east and southeast views. The photo shows no roof over the side bay. There seems to be some sort of parapet above the band molding capping the second story level. This may have been an open deck. At some point, the parapet was removed completely along with the band molding and a new roof was added. This new roofline ties with the cross gable seen on the western facade of the house. I think the bringing together of several planes has created this visual ambiguity we note.

Ella and Charles remained in the home until the year after Ella’s death in 1928. The purchasers were John and Elizabeth Macintosh. They would remain in the house until their deaths in 1948 & 1958 respectively. Their daughter Katherine, or Catherine depending on the document, would sell the home in 1961. The next owners were Everett & Lucy Buxton. They lived in the house until Lucy died in 1971. The house would pass through 3 different owners in the 70’s and 80’s before being sold to the current owners. They are both former faculty members at the University of Southern Maine.