Built in 1923 by Frank and Grace Leavitt

Who was Nahum Pillsbury? I asked myself this question when I was researching the deed history for our subject house. Stevens & Shettleworth listed this house in their publication of 1990 and they spoke of Frank only. This led to my surprise when I did not find Frank but Grace and the aforementioned Nahum instead.

After the turn of the 19th century, the city of Portland encouraged development along the newly opened Baxter Boulevard. In the case of Belmeade and Deerfield Streets, the plats were accepted by the city in 1910. Most of the development occurred after WWI. Edward Winslow purchased the lot from the Boulevard Park corporation in 1919. Oddly, Edward seems to have done nothing with the lot for the 3+ years he owned it. When he sold it to Grace and Nahum in 1923, it did not have any structures mentioned. What is mentioned are the covenants placed on the properties by the corporation. They included:

In that all covering sweep of roof Stevens would, once again, combine the concept of a very plastic ‘skin’ covering the house from his greatest shingle works with powerful colonial forms to create a new look for a new era.

Frank Leavitt was, according to Stevens and Shettleworth, the treasurer of Carter Brothers Jewelers when he and Grace built their home. They had married in 1899. At that time Frank listed his residence as Saco and Grace listed Biddeford. By the time of the 1900 census, they were in Portland. The 1910 census shows them in Portland with two sons. Richard, born in 1902 & Francis, born in 1905. The 1920 census is a repeat of 1910. By 1930, Francis has moved away but Richard is still living at home.

The current tax records state the main block sits on a full foundation. From the street it’s hard to believe as the house seems to be really set right into the ground. The shingles are stained a medium brown and laid in a fairly wide exposure. I suspect the current shingles are not original. The dormer just peaking out of the trees in the image above does not appear to be original as it is not visible in the tax photo from 1924. 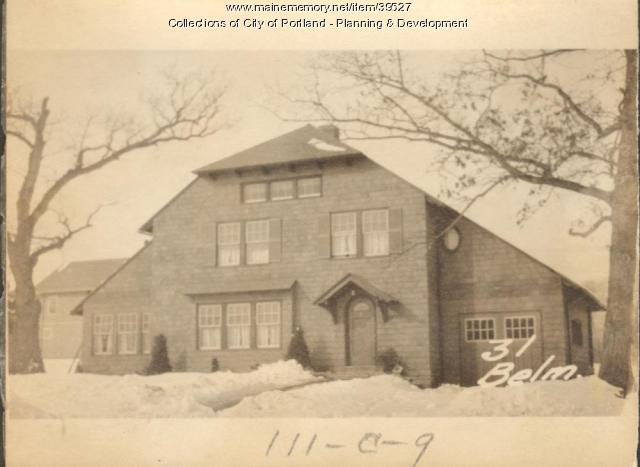 In 1929, Nahum Pillsbury, remember Nahum?, died. He was Grace’s father. Born in Shapleigh Maine in 1845, he served in Company 1 of the 17th Maine Regiment in the Civil War. He was the owner of record for 31 Belmeade in 1924 where his war record was noted. It would seem that his percentage of the property was tax-exempt. How the formula worked is unknown. He remained there until his death. He was buried in Laurel Hill in Saco.

Frank Leavitt died in 1937 and was buried in Laurel Hill. Grace remained in the house until sometime around 1942 or so. The date is ambiguous as the deed transferring the property to Ernest Clarke contains a clause allowing Charles Turner who was listed as a tenant to stay until May 31 of 1943. Grace is listed as a resident of Portland on this deed but I have no record of where she was living at the time. Grace died in 1954.

Perhaps the most Arts and Crafts feature of the house is the exquisite hood over the entrance. Seemingly too thin in profile to even hold itself up, Its power to cover and protect is seen in the shadows it projects.

Clarke sold the home to Herman and Mabel Shapiro in 1945 and they sold it to Arthur Waterman in 1949. Arthur was born in Portland in 1907. His father was a Russian emigre and his mother a native of Maine. He served in WWII having enlisted in 1942 when he was 35 years old. Arthur had married Frances Helfont in 1931 but the marriage seems to have faltered as Arthur’s enlistment record shows his status as ‘single with dependents’ and Frances is listed on a marriage license from NYC dated April 3, 1936. On this license, her marital status is ‘divorced’.

Arthur Waterman remained in 31 Belmeade until his death in 1974. His will conferred the property on his sister Harriet who it appears was living with him at that time. Harriet would remain there until she passed away in 2005. The property was sold at that time to a local couple who sold it to the current owners in 2009.