It’s perhaps the most visible of all the houses in the city. Setting on the crest of Bramhall Hill, it is seen by everyone entering the city, or just passing through on I-295, from the south. It’s buff brick shinning in the late day sun. I think it is a good subject for the 100th house here on the blog.

That’s right. It’s been 18 months and 105 posts since I took my first, tentative, steps on writing about the houses of Portland and the people who lived in and created them. We have come a long way since we stopped and considered the Harry Butler house on Thomas Street in February of 2015. We will revisit that and other early posts in the weeks to come.

For now, let’s get back to our subject house.

George Fletcher West was a successful industrialist and investor living in Portland at the beginning of the 20th century. He was born in 1860 to George W and Sarah F West in Tyringham Massachusetts. He married Jennie Estelle Means in 1886. She was born in Milbridge Maine in 1862 to Samuel and Mary Means. In March of 1887, Jennie gave birth to Vernon Frost West. He would be their only child.

For the design, West went to Frederick Tompson. Tompson was born in Portland in 1857. He entered Francis Fassett’s office in 1876 & started his own practice in 1891. He worked primarily in the Colonial Revival style with an occasional foray into Queen Anne and other eclectic styles. For George West, he would stick to the Colonial Revival and create Portland’s largest private residence at a tad under 24,000 square feet. The as-built cost was a shocking, for 1910, $100,000.00.

Oh, what a design he made. The house is set on a high table with a full three stories above and seems to tower over its site. The proportions are equally large with even the windows on the front facade being oversized. All of this pales of course to the massive entry porch. The finely detailed Ionic columns are 30′ tall! The coffered ceiling of the porch is another 5′ above that. With the rounded second-floor balcony adding to the grandeur, the entry itself seems a bit understated. To both sides of the entry is an open porch covering that side of the house.

The choice of terracotta tiles for the roof is an interesting one. It’s not a traditional material for the style, especially in northern New England. There are contemporaneous examples of their use in Portland, Stevens used them some in his more eclectic works, but they are very uncommon. I’m on the fence on their use here. They had a touch of vibrance and color but the resultant roof seems awfully busy.

The windows are pure gems. They are inset into ‘niches reminiscent of Bullfinch’s Harrison Otis House in Boston. The mullions are appropriately scaled for the size of the window. The diamond detail above the window and the painted keystone and spring points help to balance the large voids of the windows below. 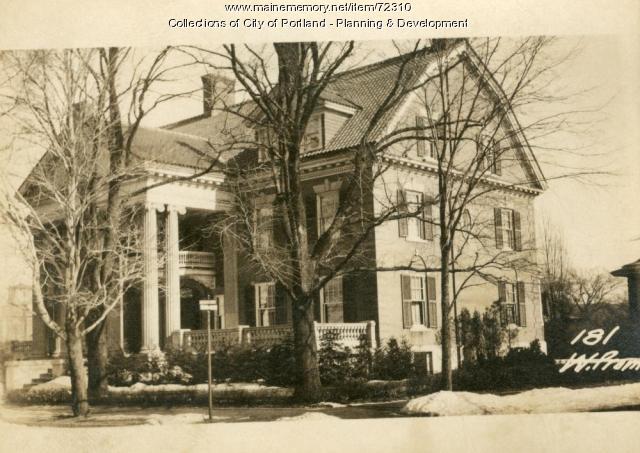 181 Western Promenade in 1924. Image property of the Maine Historical Society.

Around the same time he built his home, George and Vernon formed Geo West & Son. They would buy, sell and lease real estate in Portland until the Depression. George and Jennie West lived at 181 Western Promenade up to George’s death in 1943 and beyond. George’s will, which was probated in Feb of 1944 bequeathed all of his estate to Jennie and Vernon. It specifically stated that there were no charitable bequeaths as he had ‘made enough when he was alive’. Jennie died in 1950. She and Vernon sold the home in 1947.

The West memorials at Evergreen Cemetery.

Even the flower urns are overscaled.

The next owners were Constantine and Evangelos Hagi Mallis. The surname is ‘Hagimallis’ on the deed but ‘Hagi Mallis’ or simply ‘Mallis’ on most of the documents I have found for them. Constantine was born in Massachusetts in 1914. The 1920 census showed his family living in Berlin NH. His parents had immigrated from Turkey in 1909. He enlisted in the US Army in 1942 at which time he was living in Manchester NH and working as a hotel manager. By 1955 he and Evangelos had separated as he married a Dorothy Peterson in that year. They transferred the home to a Mary Mallis, who may have been his mother, in 1957. Mary would retain ownership until 1972 when she deeded it to Constantine’s sister Aphrodite Venus Perides. No, I’m not kidding. In 1983 the reverse took place and Mary was again the owner of record.

The rear of the house has a 2 story service ell with a rounded bay at its intersection with the body of the house and a conservatory, barely visible in the photo above, as its notable features. The level of detail has not been diminished in any way when compared to the front.

In 1985 the property was purchased by Al and Judy Glickman. Glickman was a successful developer of shopping centers and malls amongst other projects. He was involved in many charitable activities including executive director of the Michael J. Fox Foundation for Parkinson’s Research. In Portland, he is probably best known for the Albert Brenner Glickman Family Library at the University of Southern Maine. The Glickmans sold the home in 1990.

The Glickamns sold to a photographer from Los Altos California by the name of Jeffrey Melchor. 7 months later he sold to one Ignatius Cronin. Cronin’s residence was listed on the deed as Tokyo Japan. According to a 2001 Japan Times article, Cronin was a native of San Francisco who first traveled to Japan while in college in 1964. He would be involved in media, design, and public relations worldwide for over 50 years. Cronin sold the house to Eric and Noa Shinderman in 2002. Eric was a well-known psychiatrist from Chicago IL specializing in addiction treatment. He would be convicted of writing fake prescriptions at his wife’s clinic in Westbrook in 2007 & served 6 months in federal prison.  The Shindermans sold to the current owners, Gary Elliot and Dorene Shugrue, in 2009.

Greater Portland Landmarks hosted a gala fundraiser at the West Mansion on June 10, 2016. A blog post promoting the event can be seen here and a photo gallery of the event is available here.