Built in 1915 for Harry ‘Henry’ Wilkie. Design by Fred Tompson.

An Arts and Crafts bungalow in the Fessenden Park neighborhood.

Harry Wilkie purchased a small lot of 6600 sq/ft, next to Alice Hall , from Albion Wilson in June of 1915. Harry, or Henry as he was also known, was born in Scotland in 1879. When he arrived in the US is unknown. He first appears in the 1910 census when he was a boarder in the Lazenby house in Rosebud Montana. Also boarding in the with the Lazenby’s was Harry’s brother James and John Sawyer, a 35 year old from Portland Maine. Harry was listed as residing in Rosebud when he purchased the land for our subject.

Harry built a ‘modern’ home for himself. The Arts and Crafts style was ascendant in popularity at the time. Margaret Fogg was building her bungalow on Danforth Street in 1915 and John Howard Stevens had built his own Arts and Crafts home nearby to our subject in Craigie Street the year before. It’s not known where the design came from but Harry ended up with a handsome but rather large given the size of the lot, home of 3100 sq/ft.

The Fessenden Street facade is well ordered with the chimney and small windows balancing the larger window unit at left. The second floor windows and panel work in the peak help to keep the whole arrangement symmetrical. The second floor windows are casement which is a hallmark of the style. The chimney is a bit ‘colonial’ in its materials and form. This facade has a northwest alignment and as such is in much better condition than the front, south facing facade.

Exposure to the weather and some deferred maintenance have rendered the main facade rather tired looking.

By 1918, Harry Wilkie was married to Mary Ellen Sawyer. The date of their marriage is unknown but she was the sister of Harry’s former Montana room mate John. Harry registered for the draft in 1918. He gave his hair and eye color as brown, was working for the Clark-Eddy Company, more on that to come, and stated he was a naturalized citizen. It does not appear that he was called up,

As noted on his draft registration, Harry worked at Clark-Eddy Company in 1918. The top advertisement above for Clark-Eddy is from 1917-18. The EP Sawyer listed as president was Edward P Sawyer, Harry’s brother-in-law. In late 1919, Clark-Eddy was sold to Edward Sawyer and John Barker. They renamed it Sawyer-Barker Company. Harry was named assistant treasurer of the new company. 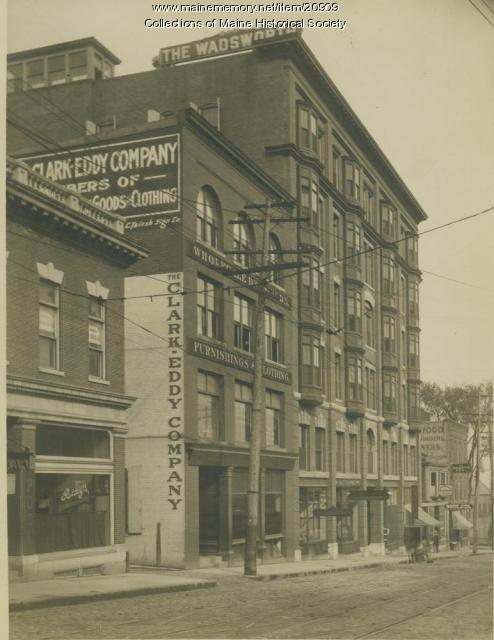 In 1921 Harry and Mary started buying property on Little Diamond Island in Casco Bay. Little Diamond had become a location for cottages in the late 19th century and had seen slow growth over the next 2 decades. The Wilkies would make 10 separate purchases to build a ‘compound’ on the western side of the island. They would hold most of the property until 1952 when it was transferred to the Sawyer family who continue to own it through an LLC. 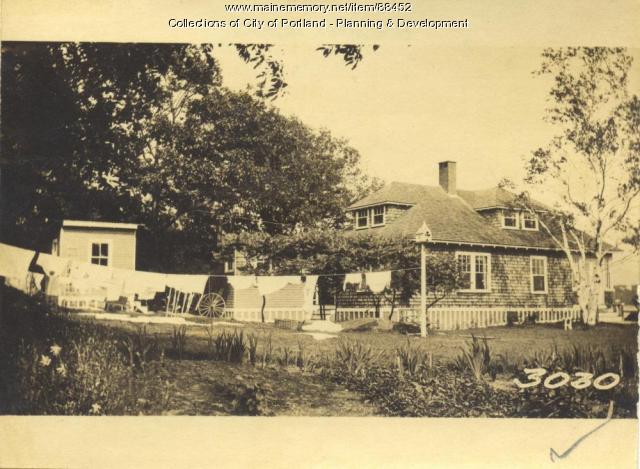 In the 1940 census Harry and Mary listed themselves, 2 of Mary’s sisters, a niece and nephew and a great niece and nephew. 8 people in the house must have been ‘cozy’ to say the least. Mary died on August 4, 1959. Harry died 54 days later on September 27th. They were buried together in Evergreen Cemetery. 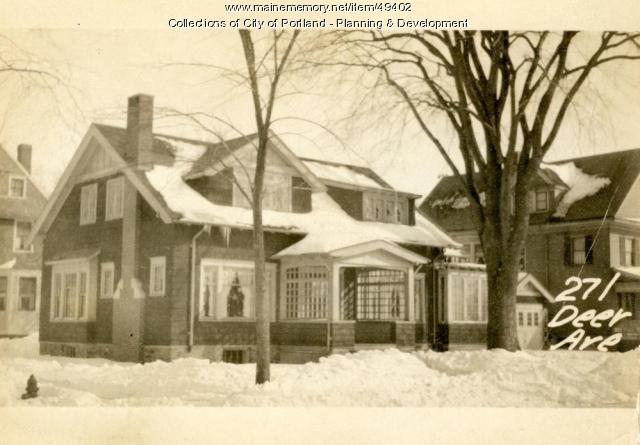 271 Deering Avenue in 1924. Image property of the Maine Historical Society.

Harry’s will passed 271 Deering Avenue to the niece and nephew who were listed as living in the house in 1940. They sold the property in early 1960. It was sold to William and Mary Redmond a mere 3 months later. William was born in Bangor in 1923 and Mary was born in Portland in 1921. They were married in Portland in 1954. They had 4 children and lived in the house until 1976. Mary died in 2014. There is a wonderful obituary for her at FindAGrave.com.

The current tax record says the diminutive garage was built in 1941. This is certainly in error as the structure carries the materials and details of the house and is in equal condition. More importantly, it is clearly visible at the right of the 1924 tax photo. If the current resident were to drive that truck in, they would have to exit through the rear window. No way they would get the doors open enough or be able to get out of the garage itself.

It’s a shame that trellis was placed there. I can understand it’s and the hedges purpose but that heavy horizontal line really breaks the composition of the entry to pieces. Borderline remuddling. The use of shed and gabled dormers so close to each other is an interesting touch. Perhaps the gabled dormer was a larger bedroom for adults/parents and the shed dormer was for the kids. Regardless of reason the pair seem a bit to heavy for the size of the roof.

The Redmonds sold house to Elizabeth S Zerner in 1976. Her mailing address was listed as 271 Deering Street. Perhaps she and her husband John were renting at that time. I think John was a physician in Portland during the time they lived in the house. They sold it in 2005 & now live in Texas. The home would see 2 more owners before being purchased by the current owner in 2009. He is a resident of Freeport. The house is currently two apartments.