Built ca 1890 by Jacob Winslow. Design probably from the office of Francis Fassett.

A brick, 3 story apartment building on the lower end of State Street.

12.23.2020. Many thanks to reader Alex, owner of the Jacob Winslow house, for sending me the images below from the Portland Daily Press confirming my hunch of Francis Fassett as the designer of our subject. I am especially excited to see the detailed description of the layout and amenities included. the second image is a listing for the rental of one of the units. Sounds like they were pretty nice. And they would ‘paper to suit’.

When I received the request to write about our subject, I didn’t realize at the time the challenge it would present. Regular readers know I rely on the trail of ownership as one of the foundations of the story of a building. Logically, this will not yield the full history of the residents and events of the location on its own. In our case, the builder, Jacob Winslow, is far too important in the city’s late 19th century, and his story is too robust to be told here in its entirety. And, while we will look at some of the various owners over the years, the full story will take other avenues. We will also take a brief look at who was on the site before Jacob bought it in 1888.

The style is Italianate, Fassett’s standby, with some Colonial Revival details added in. The plan is symmetrically arranged around a central hall and stairwell. The design is all in the Fassett ‘canon’ with the vertical elements of the facade, the bays, taking precedent. The second and third floors are identical units and, in theory, could be stacked on top of each other many times over. Capping it all is a very understated cornice with simple brackets. The brickwork shows some well-executed pattern work, niches, corbels, and more. It makes me think it was done by the Cunningham Brothers.

Joseph Holt Ingraham, whose once-grand Federal-style home is across the street, sold the land for 46-50 State Street to Walter Simonton in 1802. Ingraham was the first promoter and developer of State Street in the days before Maine became a state. After Simonton’s death in 1811, the property changed hands several times before being purchased by Eleazer Holmes in 1823. Holmes is listed in an 1827 city directory and a deed transferring the property to his son, Eleazer Jr, in the same year as a housewright. This deed speaks of land and makes no mention of buildings.

The Holmes family owned the property until 1883 when they sold it to Edward Kent. There were buildings on the site by then as they are mentioned in the deed although nothing is said as to how many or any other details. Kent was a clerk in his father Reuben’s bakery and lived on Park Street when he purchased 46-50 State. He sold it to Jacob Winslow.

Jacob Winslow was one of the largest private shipowners in Portland in the late 19th century. In 1873 he was listed as the owner of 19 barks and brigs with a combined tonnage of some 8700 tons while his eponymous company owned dozens more. In that same year, he paid city taxes on property valued at over $65,000.00. When he built our subject he was heavily involved in real estate in the city. When Jacob died in 1902, his widow Melvina inherited the property. She would hold it until 1921.

The changes in details after the chimney lead me to think the rear portion was added later.

The 1910 city directory lists 4 people at our subject address. This seems odd as there would seem to be at least 6 units. Perhaps the last 2 were empty at the time.
Emery and Lillian Smith. Emery was born in 1878. His birth record says he was born in Cape Elizabeth but on his marriage certificate of 1902, he listed Stonnington as his place of birth. Lillian was born in Portland to William and Laura Burns in 1880. Emery worked as a salesman then buyer for a clothing store in Portland. Emery and Lillian were still living at 48 State Street in 1920 but do not appear in the census after that. They purchased a cottage on Little Diamond Island in 1929. They owned this property until Lillian died in 1945. Emery died in 1959.

James Reynolds. While the city directory lists James as a resident in 1910, the census for that year does not. It does list Ann Reynolds. Ann’s daughter Mattie was living with her in 1910 but in 1900 was living on her own in an apartment on Congress Street and working as a dressmaker. She had immigrated from Canada in 1891. There are no other records for Ann, Mattie or Nina, Ann’s youngest daughter.

Anne C Howison. Anne, or Annie, was a Virginian who Ludwell Howison in 1880. They had two children, Ludwell Jr and William. Both were born in New Mexico. In 1900, Ludwell Sr listed his occupation as a ‘checker’. Of what he checked and for whom is a mystery. Ludwell died in 1905. Anne lived at 48 State with her mother and brother in 1910 but disappeared from the census records after that. 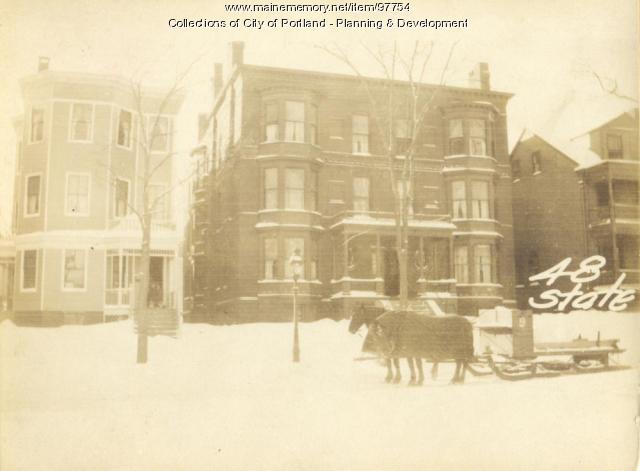 46-50 State Street in 1924. Looks like someone is getting milk delivered. Maine Historical Society.

As noted above, Melvina Winslow owned our subject until 1921 when she sold it to Enoch Richards. Enoch was a contractor according to the 1910 city directory. Per the census of that year, he was an apartment manager. The latter would seem correct as Enoch was living at 46-50 State Street in 1920 with his wife and daughter. He sold the property less than a month later and purchased a larger apartment building on Cumberland Avenue in the same year. Enoch was also a patent holder although it does not appear to have ever been marketed.

By the time the 1924 tax assessment was done, David Abramson owned our subject. Abramson was a Lithuanian Jew who immigrated to the US in 1902. He owned 9 properties, 7 being apartment buildings, in 1924. He sold 48 State Street to Abraham Lazarovitch in the same year. Abraham was a Polish Jew who came to the US in 1901. He owned a dozen properties across the peninsula in 1924. In 1949 Abraham and his wife Fannie transferred all their properties to a Federal Realty. There is not much information on Federal Realty. It was based in Portland and would seem to have been started in late 1924 or early 1925 as its first appearance in the registry of deeds is a mortgage issued in January of 1925. The 1924 tax records for Portland list the company only in the notes as having purchased the building that now houses Salvage BBQ on Congress Street after the property card and photos were done. The company seems to have been mostly inactive for the period from late 1925 to its receiving the title to the Lazarovitch’s properties as there are no transactions recorded for it in the registry of deeds. The next 9 years would see Federal Realty involved in some 24 transactions including buying, selling, and leasing properties in Portland. A couple of these transactions included Abraham and Fannie’s son William, for whom we have a great class photo from 1914 when he was 11, seen below, and the wording and subject matter leads me to think the Lazarovitch family had ‘resurrected’ the business. It no longer appears after 1958.

The building saw a string of owners and rode the highs and lows of the economy before becoming condominiums in 1981 and has continued since. Its current condition is very good.