A brick Second Empire home in the India Street District.

Jotham Lewis was a joiner who sometimes called himself an architect. In the days before professional licensing or even professional education, it was easy enough to call one’s self an architect. Especially if you were already a joiner or carpenter. Plan books and builder’s guides were being sold in the colonies prior to the revolution and were available in Portland in the 1830s. Charles Quincy Clapp donated a set of such books to the Maine Charitable Mechanics Society around 1833. Therefore, it’s not unreasonable to surmise that Jotham had a copy or two in his possession.

Jotham Lewis wasn’t a fancy builder but he wasn’t without his skills. Overall, the building is simple and neatly proportioned. Bricks laid in a running bound give a clean feel to the surface. This feeling is enhanced by the lack of a belt course. The dramatic curved bay on the corner of Newbury and Hampshire Streets stands on its own as the main statement of the house. The windows have projecting sills and simple arched lintels sitting on corbels. The center windows of the bay and the window above the entry are doubles with a heavy panel serving as a mullion dividing the two. A simple corbel works as a string course and creates a frieze that is capped with a dentil molding. Italianate brackets support the projecting cornice and lock neatly into the string course below.

In the aftermath of the Great Fire of 1866, the Lewis family’s neighborhood lay in ashes. They resided in a house next door on Hampshire Street and had since they purchased it and our subject property from Catherine’s father, Peter Jerries, in 1857. Peter was a cartman turned porter who had purchased the land in 1828. Although it’s conjecture to some extent, property tax roles would lead me to believe there were never any substantial buildings at 154 Newbury prior to 1866.

Stereograph of India Street from Congress after The Great Fire. Mainememory.net

Jotham and Catherine lived at 154 Newbury Street until her death in 1874. Jotham remarried the next year and, in 1883, moved into the property next door on Hampshire Street which he had built after the fire as well. He rented our subject to a car coupler for the Grand Trunk Railroad named John Monroe. 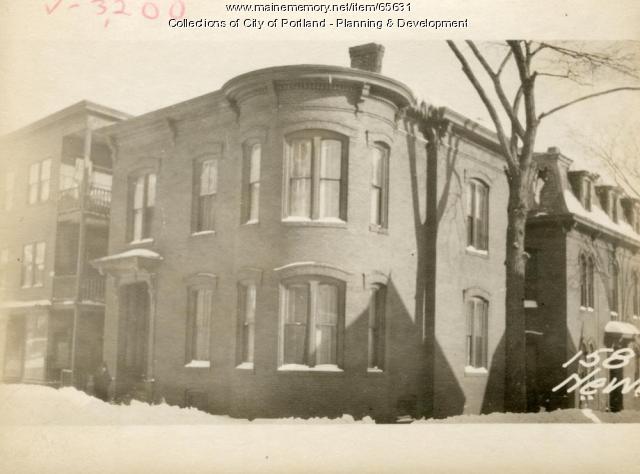 In 1898, Edward J Farrell, a Canadian-born building contractor who lived on the Upper Westside of Manhattan, purchased the home from Jotham and Catherine’s children, Harriet and Edward. Farrell then transferred to his sister Margaret. In 1900, Margaret was living there with two nieces, Helena and Mabel, and a nephew Edward James Monroe who was a yardmaster for the Grand Trunk Railroad.

The entry is an arched recess and is in good condition. The door seems a bit too commercial and is, with none of its lines matching the trim, definitely a replacement. Carved brackets hold an Italianate hood. The casing of the entry sports a very elaborate keystone. Above the casing is an attractive molding with a lozenge motif.

154 Newbury Street on Sanborn Insurance Map of 1886. Library of Congress

Margaret Farrell was born in New Brunswick Canada in 1849. She appears to have never married. In 1900, she gave her profession as tailoress and net-worth at $25,000. She remained at 154 Newbury Street until 1926 when she sold it to Antonio and Maria Cardilli. The Cardillis were Italian immigrants. Antonio was born in 1874 and came to the US in 1903. Maria, born in 1879, followed him in 1909. They had a daughter before leaving Italy and would have 7 more children in the US. One daughter, Irena, died at 6 months.

Antonio died sometime around 1933. I cannot find any records of his death or burial but starting in 1934, Maria is listed as his widow in the city directories. Various documents including census and city directories hint at a musical family. Sons James and Santonio listed their employment as musicians at different times. Maria remained at 154 Newbury until her death in 1972. She had transferred ownership to her son Santonio and daughter Annie in 1971. They sold it in June of 1972.
An interesting side note about Annie. Her obituary, found here, notes her family members and a son, Mark, but no husband late or living. A court filing made one week after she and Santonio sold the Newbury Street property serves to explain this. The filing states that on April 8 of 1964, Annie Cardilli and Morris Silverman, a Portland tire dealer, were married in a civil ceremony in Portsmouth, New Hampshire. On May 25, Mark Silverman was born to Morris and Annie. The filing then states that, as of October 15, 1966, Annie and Mark were no longer living with Morris. Annie requested child support but did not seek a divorce.

154 Newbury Street is a single-family home in the India Street Historic District . It is in very good condition. It is owned by the principal of a construction management firm and his wife.