A wooden Mansard in the wedge of Pine and Emery Streets in the West End.

It didn’t go well for Russell Worcester. Born to a Portland joiner in 1834, he learned his father’s trade. He started buying property in 1858 but, with his first purchase, a pattern of mortgaging the newly purchased land to finance building a house on it began. He was involved in only 2 or 3 transactions prior to enlisting in the army during the Civil War. After the war, in 1865, he married a widow, Myra Towle. Myra’s first husband, Frederick, had died of TB in 1861 leaving her with a 3-year-old daughter Mary.

Russell Worcester was a talented builder. 106 Pine Street is a well-balanced 2 story Mansard with a 3rd story in the garret. Proportions are good although the high pedestal makes the composition a bit over tall. The lack of a ‘full’ belt course defining the floors is resolved by the use of dentiled brackets at the eave line of the entry and bay windows. The windows are tall and a bit narrow but scale well from the first to the second floors. The tax photo indicates pilasters at the corners, now lost under the current modern siding. 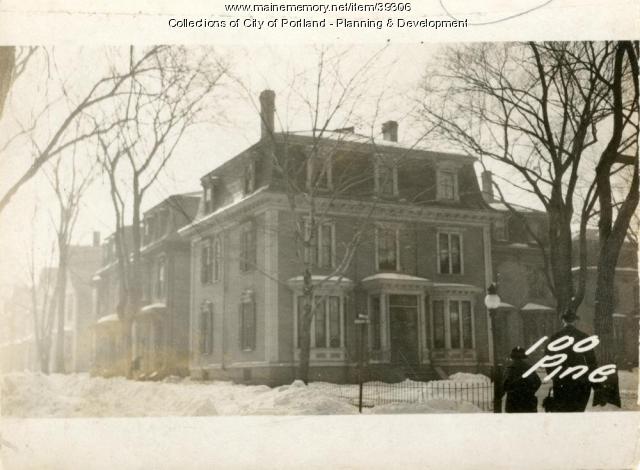 Russell Worcester purchased the lot from John B Brown in 1869 and, per his MO, he also took a mortgage with Mr. Brown for $1480.00. As he had purchased the lot for $1300.00, we can see he was already borrowing to build. It should be noted that Worcester already had several mortgages with John Bundy Brown, among several different lenders, and would take out a few more through 1871. On February 7 of 1872, Russell Worcester filed for bankruptcy in Portland. John Brown foreclosed in July of the same year. Russell Worcester filed for bankruptcy 4 more times with the last filing happening in September of 1873. His last appearance in any record is a deed from July of 1880 wherein he sold property on Danforth Street he had inherited from his father.

There is a substantial amount of trim work on the entry and bays of the main façade. Much of it is reminiscent of James Tenney’s work on Cushman Street and the Cummings family’s works such as the family home farther up Pine Street. The layering of details, especially on the entry, creates a pastiche of depths and shadows that enlivens an otherwise simple composition.

After foreclosing on 106 Pine Street in 1872, John Brown held the property until 1875 when he sold it to one George Frost of Sanford. Frost held ownership until 1877 when he sold it to Dr. Nahum Hersom and his wife Jane. Theirs is a story that should be told. 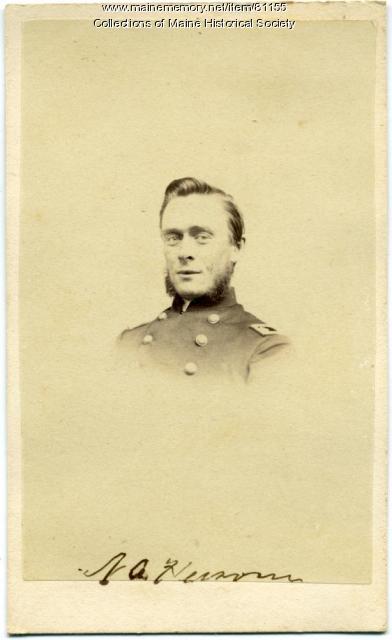 Dr. Nahum A Hersom from Mainememory.net

Nahum Alvah Hersom was born in Lebanon, Maine 1835. After attending Parsonsfield Seminary and Lebanon Academy he began the study of medicine in 1858 and graduated from the University of Pennsylvania in 1861. The following July he commenced practice in Sanford, remaining until he received a commission as assistant surgeon, Twentieth Maine Infantry, August 9, 1862. Although records are vague, Hersom most likely contracted malaria during his military service which led to his medical discharge in 1865. He married Jane Lord of Sanford in November of 1865 and resumed his practice before moving to Portland in 1872.

Nahum suffered from his bout with malaria for the remainder of his life. His obituary noted he traveled extensively in search of a cure. His death came from peritonitis in 1881 at the age of 45. He was in Dublin Ireland. His body was returned and buried in Evergreen Cemetery.

Jane Smith Lord was born to Samuel and Sophia Lord of Sanford in 1840. Jane attended public and private schools, an uncommon thing for a female in the 1840’s & 50’s, in Sanford. She taught school there until her marriage to Nahum Hersom. At the time of their marriage, Nahum was practicing in Farmington New Hampshire, not too far from Sanford. His practice was said to be quite busy and after a few years he, according to one biography, “decided to take a two-week vacation that ended up lasting 5 years”. It was after this period of recovery that the family moved to Portland.

After Nahum’s death, Jane didn’t put on a veil and dress in black for the remainder of her life. She didn’t sell everything and move back to Sanford to be close to her family. After her husband’s death, Jane Lord Hersom did something that might seem amazing but shouldn’t be given her biography, Jane decided to become a doctor. Her first step would be to spend some time training with a local physician. That physician was Stephen Holmes Weeks.

Stephen H. Weeks was born to a farmer and his wife in Cornish Maine in 1836. He attended the University of Pennsylvania, Nahum Hersom’s alma mater, and graduated in 1864. He taught at the Medical School of Maine in Portland and Bowdoin School of Medicine. He was an original member of the staff of Maine General Hospital where he practiced for over 30 years. He is the gentleman seated on the far right in the image below from the Maine Memory Net. We can assume that he and Jane knew each other. Regardless, he was a great choice as a teacher. 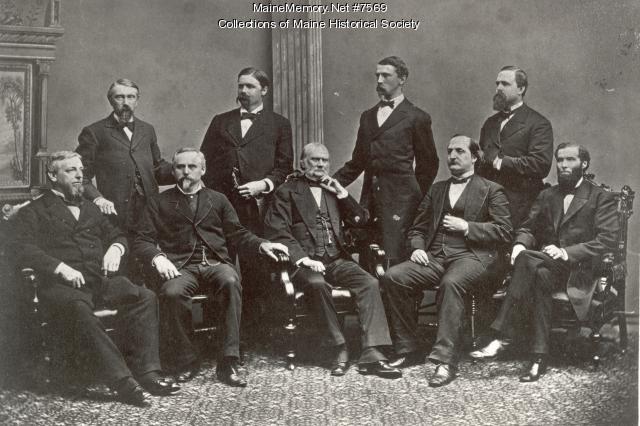 Members of the original staff of Maine General Hospital ca: 1874. Stephen Weeks is seated at the far right. Mainememory.net

After studying under Dr. Weeks for some 16 months, Jane enrolled in the Women’s Medical College. The college was founded in 1850 by a group of Quakers and was the first female medical school in the country and the first the world authorized to award MDs. She graduated with her degree and returned to Portland in 1886.

Upon her return to Portland, Jane took up practice in Nahum’s old office at 106 Pine. She and Nahum had a daughter, Mabel, in 1875. She was not the only child born to the couple. The family plot in Evergreen Cemetery has 3 small stones inscribed simply with “Baby”. Also, the primary stone for Nahum and Jane has the following inscription on it:

Mabel Lord Hersom married Rufus Horton Jones, an Episcopalian minister from Saco, in 1906. Rufus Horton Jones Jr was born on July 23 of 1907. On August 20, 1907, Rufus Sr. died of a skull fracture he received when a fuel tank exploded on a train full of people watching the Old Orchard beach fire on August 15. He was 30 years old. Mabel and the infant Rufus moved back into our subject house with Jane. She would remain there until her death in May of 1937. Rufus Junior graduated from Harvard University and had a long career in advertising. He died in 1976. 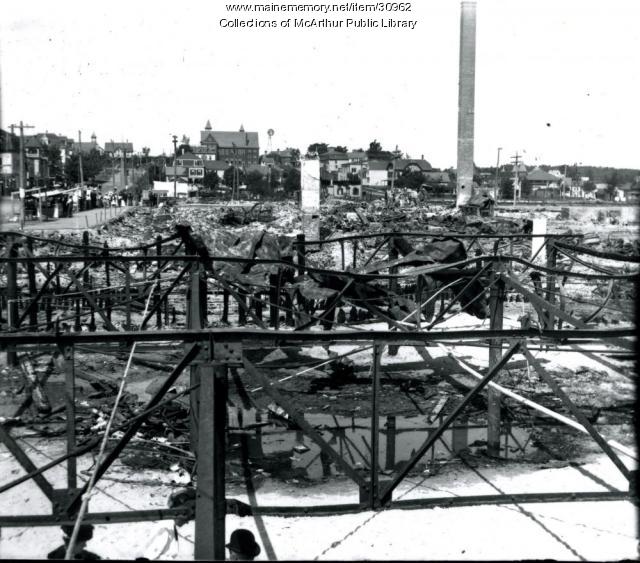 Old Orchard Beach business district and Pier after the fire of August 15, 1907. Mainememory.net

Jane Hersom was very active in the community. She was a suffragette and involved in education reform. She encouraged more women to enter the medical field. She served the Girls Orphanage on State Street and the Home for Aged Women on Emery Street gratis. All of this while keeping a steady medical practice. Jane Lord Hersom died on November 28, 1928. She was 88 years old.
Several of the account books and other papers for Nahum and Jane’s practice and the Rufus Jones Senior and Junior are held by the Maine Historical Society. Although Nahum’s books are mostly notations of how much was received from whom, Jane’s contain more information including, in some cases, notations on diagnosis and treatments. The books are quite fragile. Much care and time would be needed for a complete review of their contents. This would be time and effort well spent as Jane would seem to be who has not received the recognition she deserves.