A handsome Queen-Anne in the Coyle Park neighborhood.

When the annals of noted Master Mariners from the end of the age of sail are compiled, Lincoln Webb Jewett’s name must be included. He grew up in a fishing and seafaring family and started on the sea at a very young age. In time, he would become one of the best-known captains of coasters and fishing vessels. By the time he built our subject home, he was skippering what was the supertanker of its day. 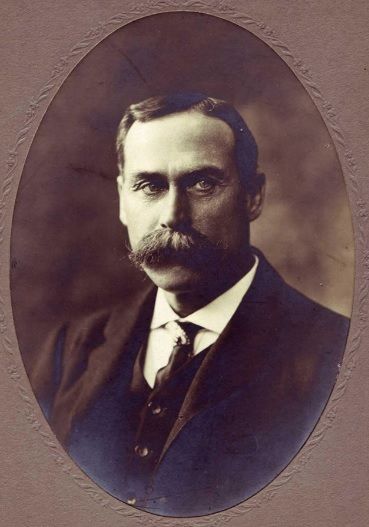 Jewett’s choice for his house is fitting. Coyle Park was built on the grounds of the former estate of John Brown Coyle. Coyle was long active in the passenger steamship business having founded the Portland Steam Packet Company. The company was an early innovator in the steamship business and is best known for being the owner of the ill-fated “Portland” Coyle had built his palatial estate in the late 1860s. A boarding pass for the Portland Steam Packet Company. NOAA.Org

It’s a neighborhood we’ve visited before although by 1905 it had changed dramatically. After the death of John Coyle senior in 1884, his son John Coyle Jr lived on the estate until his death in 1898. At that time, the mansion was mostly torn down with the rear, service, wing being moved to the lower section of Clifton Street which was extended to Woodfords Street at that time. The estate grounds were sold to a man who is well known to this blog. Lewellyn Morse Leighton.

The rear wing of the John B Coyle mansion now at 57 Clifton Street.

Lincoln Jewett purchased two lots from another mariner named Leslie Clark. Clark had purchased them from Leighton in 1905. Llewellyn Leighton understood that in order to get potential buyers to sign on, he needed to create a quiet suburban environment. He also knew he would need to place some controls on what was built if he wanted to get the best prices for the lots. To this end, he drew up a list of 8 restrictions that were included in all the deeds for the park. They were:

To design his new home, Lincoln Jewett went to one of the city’s premier firms of John Calvin and John Howard Stevens. As we shall see in future posts, this wasn’t the firm’s only commission in Coyle Park nor were they the only firm working there at the time.  What Stevens and Stevens created at 26 Belmont is a mature and confident blending of Queen Anne, Shingle, and Colonial Revival styles in a suburban context.

The house is a rectangle measuring 21′ on the street and just shy of 50 (49)’ deep. It’s most obvious and inviting feature is a massive covered porch that wraps all of the front facade and almost half of the southwest side. An open porch continues down the remainder of the southwest side and continues around the rear. There are 3 stacked bays on the house all of which are contained under a very deep cornice. The walls are done in the Queen Anne mode with clapboards on the first floor and shingles on the second. The belt-line dividing these materials, and also denoting the ceiling line of the first floor, is flared and has a series of moldings highlighting it. 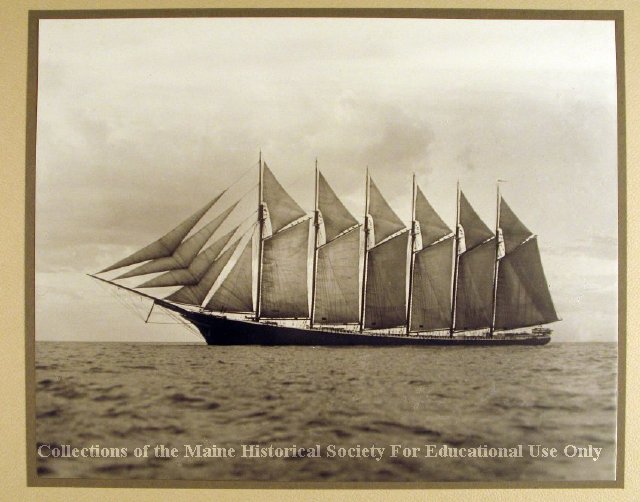 The 6 masted schooner Eleanor Percy was launched from the Percy and Small shipyard in Bath in 1900. At the time of her launch, she was the largest sailing vessel in the world and the 2nd ‘6 master’ to be launched from Percy & Small. Her first captain was Lincoln Webb Jewett. Even with Jewett’s abilities, Eleanor proved to be difficult to manage. On her second voyage, as she was inbound to Boston loaded with over 5000 tons of coal, she struck a ledge near Boston Light. The damage was severe with most of her false keel being destroyed along with a small part of the main keel lost and some planking needing replacement. It took almost two weeks to repair. Then, in June of 1903, she hit the only other 6 masted schooner in the world, the George Wells, off Cape Cod with minimal damage. The Eleanor Percy was also fast. In 1903, Lincoln and crew sailed from Boston to Norfolk VA, loaded with coal, and returned to Boston in 22 days. Lincoln Jewett remained in command of the Eleanor Percy until his retirement in 1910.

The entry is a refined affair in the colonial revival mode. Simple plinths carry columns that are way too thin for their height. The columns have ionic capitals and carry a full entablature replete with reeding and dentils. The door is very likely original.

The transition from stone to wood handled with simple elegance is something of a trademark for John Calvin Stevens.

Lincoln Jewett sold 26 Belmont Street to Isaac Parsons in 1915. He then purchased a lot on Berkley Street where he built a double-decker. He and his wife lived on the second floor and rented the first. They remained there for the rest of their lives with Lincon passing in 1929 and Anna in 1941. Isaac Parsons lived in Waltham Mass according to the deed. He took a mortgage from Jewett for $6500 at the time of purchase. In early 1917 Parsons took a new mortgage from the Maine Savings Bank for $5000. 9 months later, he transferred the property to Edward Winslow. Isaac’s son George had married Edward’s sister Mary in 1892. Edward transferred the house to Mary in 1923. 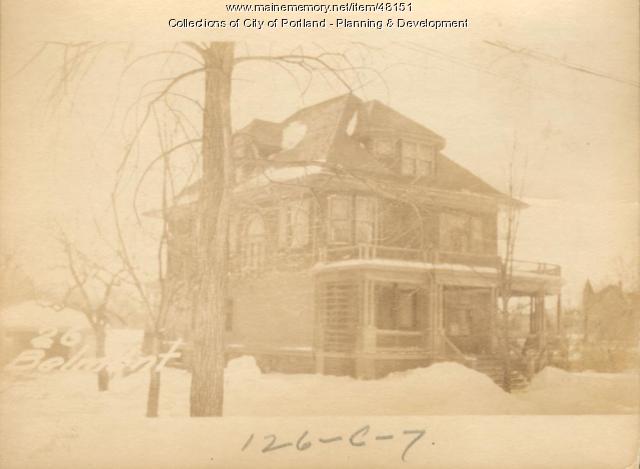 George Parsons worked his way up from traveling salesman to the manager of Chadbourne and Kendall Woolens, a long time dealer in woolen goods and ‘trimmings’ on Middle Street. He and Mary had two sons, Winslow and Delmont. They also boarded relatives from time to time. In 1920, Mary’s niece Pauline Winslow and nephew Harrison Winslow were living with them. In 1929, tragedy struck the family. After finishing college, Delmont moved to New York City where he worked for the American Telephone & Telegraph Company. He lived in Brooklyn with a couple of friends from college. He also befriended a former WWI fighter pilot and test pilot for the Ford Aircraft Company named Lou Foote. 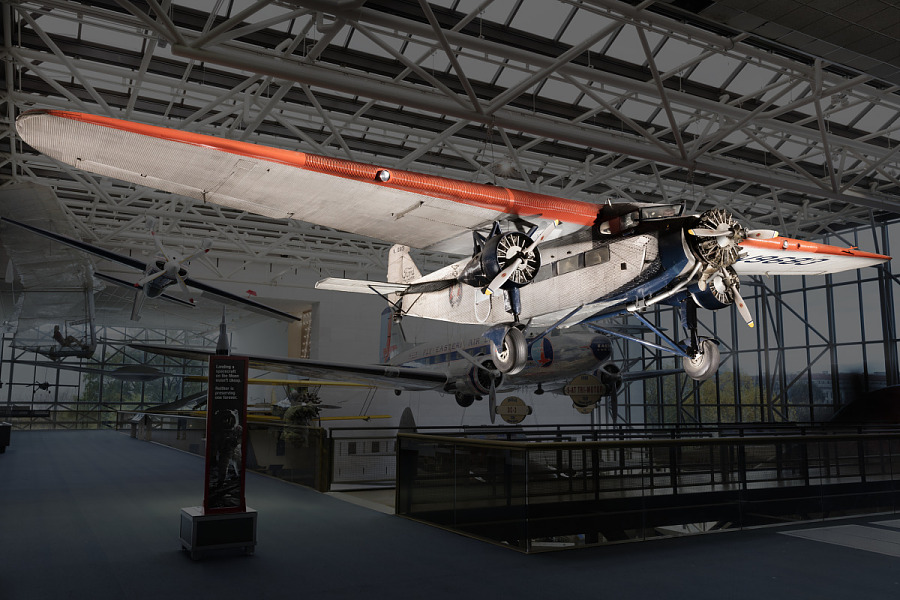 Having worked for Ford, Lou Foote was quite familiar with the Trimotor or “Tin Goose” as it was known. One of the earliest planes designed for passenger use, it was in production for less than 10 years with about 300 copies being produced. One of those copies was purchased by a fledgling carrier flying out of Newark New Jersey named Colonial Western Airlines. In addition to flying passenger routes, the airline offered sightseeing trips over New York City that had proven quite popular. In early March of 1929, Lou Foote signed on as a pilot for Colonial Western. On March 17 of 1929, Delmont accepted an offer to accompany Foote on the last sightseeing flight of the day. The plane took off from the field and almost immediately suffered engine failure. It stalled and Foote took action to put the plane down in a freight yard. Although it looked at first like he might succeed, Foote’s efforts were in vain and the plane slammed head-first into a rail car loaded with sand. Parsons and Foote were hurled from the plane and all of the remaining 13 people aboard were killed on impact. Delmont was conscious and lucid when rescuers arrived. He succumbed to his injuries the following day. Foote, witnesses said, was conscious when found but suffering from multiple wounds including a skull fracture. It was said he “requested a cigarette and asked if they were in New York” before passing out. He was the sole survivor of what was for its time, the worst aviation disaster in American history. Delmont was buried in the family plot in Evergreen Cemetery.

Winslow Parsons married Irene Ledoux of Portland in 1927. They moved into a house on Ocean Avenue. Winslow worked in the Winslow family pottery business until his retirement. He and Irene had no children and lived out their lives on Ocean Avenue. Mary Parsons died in 1948 and our subject property was transferred to George. On his death in 1952, Winslow inherited 26 Belmont Street. He sold it in 1954. It changed hands again in 1956 when a teacher at Portland High School named Franklin Glasscock and his wife Irene purchased it. The Glasscock family owned the home until 1992.

26 Belmont Street is a single-family home. The current condition is very good.