A cute Second Empire house in Coyle Park, between Forest Avenue and Back Cove

Although Warren Sparrow was not a builder by trade, his building activities left a mark on Portland. He sold insurance from an office on the corner of Middle and Exchange Streets in the Boyd Block. Where Starbucks now operates. He specialized in fire insurance and represented 4 different companies but he also sold life insurance. He advertised his services quite heavily, placing ads on the front page of the Portland Daily Press every day for many months in the early 1860s.

Insurance advertisements, including 2 for Warren Sparrow, from the January 1,1863 edition of the Portland Daily Press. Library of Congress.

Sparrow was also a developer of land and a civic booster. He purchased a large plot of land in the 1840s on which he built his home on Arlington Street and would over the years build several more homes while selling lots to others to build on. Our subject is part of this land. While developing this property, he was also supporting the construction of the Portland and Forest Avenue Horse Railroad Company. When built, this line would bring buyers and renters from their work in the city to their homes in what was, in the 1850s and 60s, still the ‘country’. A report in the May 15, 1863, Portland Daily Press notes Warren was selling stock subscriptions in the company and was “very successful”.

The Great Fire of 1866 didn’t seem to cause many difficulties for Warren Sparrow. He advertised daily in the papers for months after the event that the insurers he represented had paid and would pay all valid claims on policies written. He did move his offices to the Thomas Block on Commercial Street within a week of the fire. By 1868, he was back in newly constructed quarters on Exchange Street.

What the fire did give Warren was people looking for housing. With over 1000 houses being destroyed, and many of them not being rebuilt where they were, demand for housing was steep in the months and years afterward. The existence of the previously noted horse railroad made Warren’s land even more desirable.

Warren Sparrow’s advertisement for our subject from the Portland Daily Press. Library of Congress

The advertisement above first appeared in the Portland Daily Press on November 5, 1870. The ‘French Roof’ in the description is positive proof that this is our house as it is the only one on the street with a Mansard or ‘French’ roof. The ad ran until March 17th of 1871 thus giving a probable point for its first occupation. Who those first residents were is unclear. There is no record of a lease from Sparrow to the tenant. There are 3 possible names in the 1880 census but none are obvious and that leaves the possibility that someone different may have rented it prior to 1880. It wasn’t until 1904, after both Warren & Ann Sparrow had died, that we can get an idea of who was living there. And even then it’s not completely clear.

The house is a simple rectangle approximately 30’ x 16’ with a 16’ x 17’ ell on the rear. There is a projecting center tower with a steeply sloped mansard roof and quirky round windows in the roof. The current enclosed entry is not original as noted by the tax photo of 1924. This photo also shows that the enclosed porch by the drive was originally open. One thing that puzzles me slightly is Warren Sparrow’s advertisement says the house has “5 rooms”. The arrangement as taken from the street would suggest a room on each side of the center hall and stairway with another room in the ell at the rear of the house. If this arrangement is found on both floors, I would have expected 6 rooms. Perhaps the second floor of the ell was unfinished.

When Frank Sparrow sold 28 Clifton Street in 1904, the purchaser was Martha Snow. She, as best I can tell, never lived there. She, her husband David W, and their children lived on Park Street in the Park Street Row. David was an attorney in Portland. The Snows did not buy the property for income either. Martha’s brother Charles P Hemenway appears in our subject starting with the 1906 city directory and in census and city directories through his death in 1929. And in all that time, the property remained in David and Martha’s names. The Hemenway family had been prosperous in the timber and land trade in the Machias area to the level that on the census documents, Charles would always give his trade as “own income”. Researching Mr. Hemenway proves to be difficult as a gentleman from Boston with exactly the same name was very successful in the South American beef trade prior to and during the Civil war.

After Charles died in 1929, Martha Snow transferred the property to his widow Isabella. She would remain at 28 Clifton until her death in 1938 at which time it descended to their daughter Frances. Frances was born in 1899 and had married a stock and bond broker from Massachusetts named Rodney Pettingill in 1924. Frances lived in Dedham Mass at the time. Her husband died around the same time as her mother. She moved back to Portland in 1944 and sold our subject to Walter and Marion Steele the same year. Frances married an insurance executive and widower from Falmouth named Harold Walton in 1945. She died in 1996.

Walter Steele sold tires for the Dyer-Knight company on Preble Street. Marion was a telephone operator. They were married in 1917 and had 2 children, Virginia & Walter Jr. Prior to moving to Maple Street, they had lived in the Thornton Heights neighborhood of South Portland in a house their son would retain when they moved. Marion died in 1957. Walter Sr. transferred the property to Walter Jr in 1968. He died in 1974. Walter Jr would retain ownership of 28 Clifton until 1978. He died in 1999. 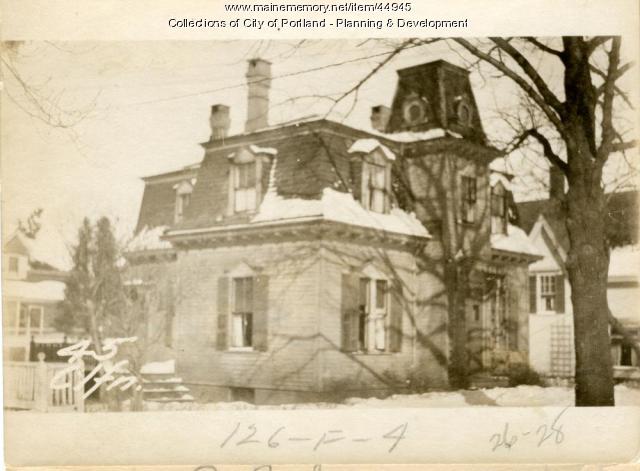 Along with our subject and his Gothic Revival home on Arlington Street, Warren Sparrow built 3 other houses in the neighborhood in the late 1800s. One is next door at 32 Clifton Street. There is a house at 6 Arlington Place and a double house at 15 Arlington Street.

28 Clifton Street is currently listed as a single-family dwelling. Condition is excellent.