It was all about the granite. Maine is well known for its granite. From the US Treasury building to Grants Tomb, (Who IS really buried there anyway?), the state has dressed some very fine buildings. But these were buildings on white or gray granite. There are other colors to be found. One distinct color found on the coast of Maine is ‘Mount Desert Pink’. It’s my belief that Payson and his architect were going for the look of pink granite in our subject.

Charles Henry Payson was born to the Reverend Charles and Annie Maria Payson in Portland in 1853. His grandfather was the noted theologian, Edward Payson, and his younger brother was Henry Payson. He married Margaret Merrill in 1886. Payson entered his uncle Henry Payson’s brokerage firm in 1879 with no more than a high-school education. In 1886 he was named president of the firm. Charles took the company into investing in and selling water bonds. His involvement, including traveling to Europe and Britain to sell bonds, is considered to be fundamental in the creation and success of the Portland Water District.

The land that would become 188-190 Pine Street on the 1882 Goodwin Atlas. Portland Public Library Digital Commons.

The land for our subject has an odd history. As seen in the 1882 map, much of it was owned by the City of Portland. In more ways than one.  Robert Hull purchased the land in 1858 and 59. Hull was born in Newry Ireland in 1798 and had been an early immigrant to the US at the age of 4. He was a candle and soap maker. He lived on Green Street, now Forest Avenue. When he died in 1868, his only heir was a minor daughter living in Buffalo New York named Isadora. Why she lived where she did is lost to time. She was represented in Portland by a John Hull who was perhaps an uncle. The property was divided into 12 shares. Then 11 of them were sold to John & Robert T Hull and a cousin, Lucretia Tenbrook Hull Ayer for $200.00. The final 12th was sold to the Portland Tenement House Co. for the tidy sum of $5,906.00!. The Portland Tenement House Company never built on our subject but did build 2 blocks in the neighborhood in the 1870s. The Hulls and Mrs. Ayer mortgaged their shares to the City of Portland in 1870. They defaulted on the note in 1878. Charles Payson purchased the lot from the city in 1896. In 1896, Payson also purchased a small slice of land behind the larger piece he purchased from the city. This was bought from the Brown estate with Philip and John M Brown signing the deed.

After collecting his property, Payson hired John Cavin Stevens to design the building. Although Stevens had not done much residential work for the Paysons, his work for the Portland Water District would have placed him in a close working relationship with Charles. When they started planning isn’t clear but it was not until 1901 that construction got underway.

What they built is a two-story block 40′ deep by 74′ wide with a full third story in the garret. It is built of a light salmon brick. Each unit has a 3 sided bay projecting from the main facade and extending through both floors. The main block is devoid of any change in the surface from the water table to the frieze. The frieze is a dentil motif made up of bricks laid vertically with alternating units pushed forward slightly from the wall plane. The frieze changes to a Greek key motif over the windows. Above the frieze is a crown that is capped with a bead molding. The soffit and cornice project deeply from the wall plane in a very Queen Anne manner.

The bay windows are what set 188-190 Pine Street off from its neighbors. They project substantially from the body of the house. On the first floor, all 3 sides are glassed. On the second floor, only the center is glassed with the two flanking panels having colonial revival moldings with a decorative panel in the center. The panels separating the window bands are covered in pebble dash tinted a shade of pink that nearly patches the slate tiles covering the gables. It is this use of pink slate and pebble dash that gives the feel of Mount Desert pink granite to our subject.

188 Pine Street was owned by members of the family until 1978. Henry and Sally Payson lived here until their home on Bowdoin Street was completed in 1906. A young investment banker named Henry Gustavus Beyer was the next tenant. He remained there until 1911. 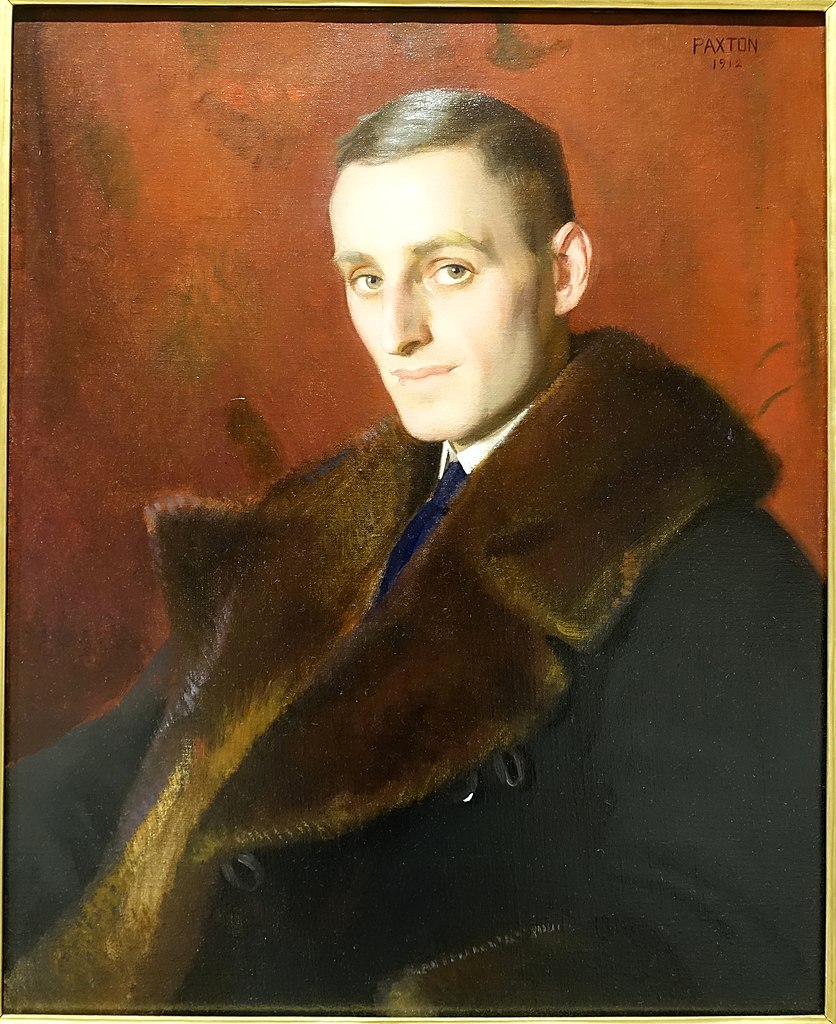 Charles’ sister Jeanette lived in our subject for a couple of years in the teens. She was followed by Frederick E Gignoux. Gignoux was born in New Jersey in 1876. He served in the US Cavalry during the Spanish-American War. His obituary in the Orange, Texas, Leader Sun in 1956 noted he had “lead the last cavalry charge”. He worked as an agent for a couple of steamship lines. In 1905, he hired John Calvin Stevens to design a ‘cottage’ in  Cape Elizabeth’s Delano Park. My great-grandfather, William D Murray, was the builder and passed away while working on the house in 1906.

190 Pine Street was sold soon after completion. The buyer was Charlotte Mansfield. Charlotte was born Charlotte Pierce in Portland in 1864. She married a jeweler named Warren Wilson Mansfield in 1890. Along with buying 190 Pine Street in 1902, Charlotte gave birth to their 4th child, Emily. Warren had a store on Middle Street. Its location was lost to urban renewal. Charlotte sold our subject to Earnest Randall in 1920.

In the late summer of 1919, Charles and Margaret Payson’s son Phillips married Marion Brown. Marion does not appear to have been related to the Brown family of the West End. The newlyweds moved into 190 Pine Street the same year. In 1920, Emily Payson was born and in 1926, Merrill, also a girl, was born. In 1930, Charles and Margaret deeded the property to Phillips and Marion. Charles Payson died in 1933 and Margaret in 1947. Marion and Phillips owned 190 Pine Street until 1978 when Marion sold the home after Phillips’ death in 1977.

Back at 188 Pine Street, Ernest Randall purchased the property in 1920. Ernest was born rich. His father John was the Randall of Randall & MacAlister Coal. The company was one of the largest marketers of cola in the city in the 1880s and 90s. Ernest was born in 1876 and grew up in the family home on the Eastern Promenade where the Portland House now stands. He attended Portland public schools then Philips Exeter Academy. His formal education ended upon graduating from that institution. He then entered the family firm as a clerk. He married Edna Mills in 1902 by which time he had become president of Randall & MacAlister. The Randalls had two daughters who would have been in their late teens when they moved into our subject. They lived here until 1932.

The solarium on the rear of 188 Pine Street appears to be original judging by the brickwork and trimmings. It is odd that the 1914 map of the area does not include it. If it is a later work, it is incredibly well integrated.

The purchaser of 190 Pine Street in 1932 was Joesphine Dalton. Josephine’s husband, Charles, ran a real estate business and was the general manager of the Portland Sand & Gravel Company. The Dalton’s were real estate buyers, sellers, developers, and owners. The 1924 tax rolls list them as owners of 15 properties in the city and on the islands. One of them was their residence at 30 Deering Street. They had two sons who were grown by the time they purchased 190 Pine Street. Charles died in 1941 and Josephine lived on at 190 Pine until she sold it in 1947.  The next owners were Thelma and Theodore Sweetland who ran a lodging house at 784 Congress Street now the site of the Portland Fire Departments Bramhall Station. 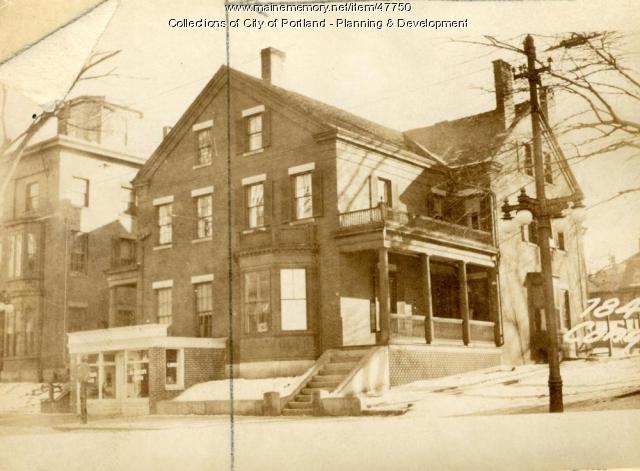 The Sweetland sold our subject in 1950. The purchasers were an attorney named Bernard Bove and his wife Marcella. The Bove’s sold a year later to Francis and Jane Kilroy. Francis was a clerk at the post office and Jane was a clerk for the US Court on Federal Street. They had 3 sons who were all full-grown by the time of the purchase of 190 Pine Street. In 1961, Francis and Jane transferred the property, and a $12,000 mortgage, to their son Richard. 6 months later, Richard sold the home, minus the mortgage, to a physician named Stanley Dienst. He lived and ran his practice from190 Pine Street until he sold it in 1968. 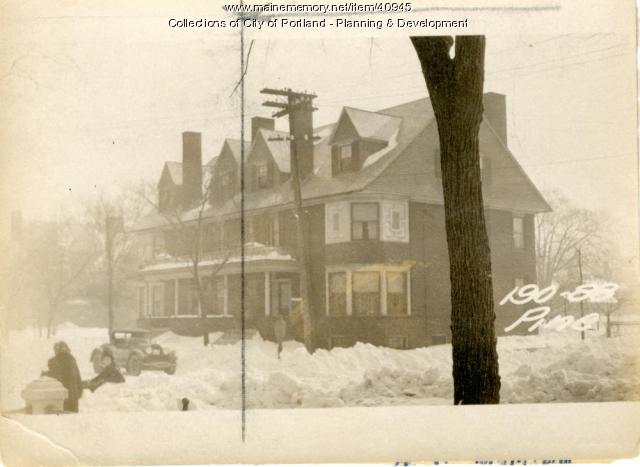 in 1968, Stanley Dienst sold 190 Pine Street to a widow named Dorothy Humphries. She resided here until 1977 when she sold it to a physician from Freeport named Rebecca Hotelling. She ran her practice here until 2007 when she sold it to another physician named Heidi Larsen. The current owner purchased it in 2014. In 2020, they submitted a plan to replace the tired, not original, garage facing Chadwick Street. As the home is in the West End Historic District, it will undergo an intensive design review. Included in the submission plan is a plan for the first floor reproduced below.