Built ca: 1902 for Fred Richards as a wedding present to Edward and Gertrude Piper.

An odd Colonial Revival in the West End Historic District

It was quite the gift. Edward Leland Piper was born in the Camden area in 1878. His aunt Caroline Piper had married Fred Richards, a successful lime merchant from Massachusetts, in 1865. By the early 1890s, Fred Richards was the President of the Union Mutual Insurance Company and was ho-nobbing with politicians at the local and state level. In 1892 he purchased a lot measuring 100′ at the corner of Pine and Vaughan Streets. He hired John Calvin Stevens to design his landmark home which is across the street from our subject. In an 1895 letter to Arthur Sewall of Bath he stated

“The plans for my house were made by John Calvin Stevens, who, in my judgment, stands head and shoulders above any other architect in the state. He is thoroughly an artist by taste and training, and, not only this, but he sees that the contractors conform to their contracts in every particular..”

Given this level of praise, I find it difficult to believe Fred Richards did not seek the services of JCS when planning a home for someone he had enough “love and affection for” to give it to them. All this is put against the issue of design being too ‘unpolished’ for Stevens’s work at the time and the issue of the job not being listed in the catalogue raisonné for Stevens on the peninsula. This is a puzzlement to be sure.

Heading of the deed for 151 Vaughan. Cumberland County Registry of Deeds

The house is a 2 story rectangle measuring 35′ on Vaughan St and 41′ on Pine Street. There is a 2 story extension measuring 21′ x 24′ on the east end facing Neal Street. The turret on the corner shows a third floor in the garret. The brick is a salmon color and the windows are decorated with over-scaled Colonial Revival lintels of concrete. The roofing is slate. We will look at details further on.

One month after Fred Richards’s deed for 151 Vaughan Street was recorded in the Registry of Deeds in April of 1903, Caroline Piper Richards died of spinal sclerosis. One month after Caroline’s death, Edward Piper married Gertrude B Jordan of Portland.  It must have been a very somber ceremony.

Gertrude Bradford Jordan was born in Portland in 1877. Her father, James, was the president of the Star Match Company. The family lived on outer Danforth Street where Gertrude’s sister, Margaret Fogg, built her home in 1915. Gertrude and Edward Piper had a son named Donald in 1906. The Pipers lived at 151 Vaughan Street until 1941 when they sold it and moved to Scarborough.

The porch has some lovely columns supporting a full Colonial Revival entablature. The railing and balusters are nicely scaled. The windows on the right are a shallow bay. The screen on the left is probably not original. I suspect it is there to provide some privacy from oncoming traffic on Vaughan Street. Those lintels though.

The south wall has a full-height bay window that projects substantially from the plan of the wall. An arched top window most likely marks the turn of the stairs. The chimney is partially projected from the wall plane and is not well integrated with the cornice. The dormer window with the odd tympanum-like pediment is an interesting thing. John Calvin Stevens sometimes used little dormers like these and he used red slate in other projects, most notably on the exterior of Horace Farmun’s house on Brighton Avenue.

When the Pipers sold 151 Vaughan Street in 1941, the purchaser was a woman from Boston named Eleanore C McDermott. I cannot find much on Eleanore. She is listed in the 1942 city directory as living in our subject as the wife of Leo J McDermott. Leo was a physician who ran his practice out of 151 Vaughan for many years. When they married is a mystery as is where. She appears to have died in the mid-40s as Leo married Jane Haley of Portland in January of 1946. In 1954 a tax lien on 151 Vaughan references Eleanore’s ‘heirs’. I can find no record of her death or burial. Leo died in 1987 and Jane in 1990. Their daughter Susan sold it in 1994.

The turret on the northwest corner is a feature that doesn’t fit well with the house. It is too far out of the body of the building and too small. It is no doubt a nice space inside but feels forced to me. 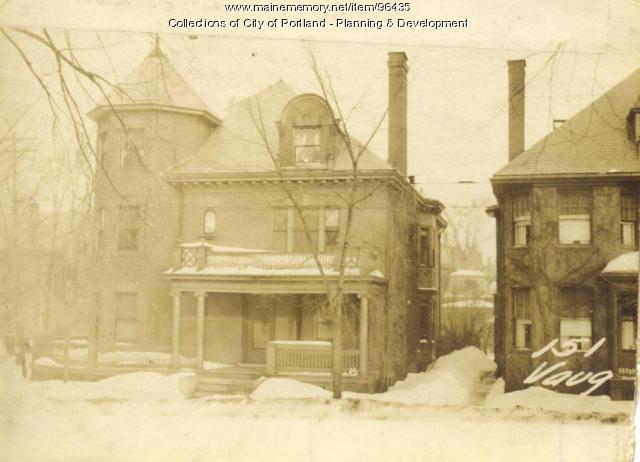 The bay on the Pine Street facade, while not well-proportioned, has a verticality that was a characteristic of Stevens’, and Fassett’s to be sure, mature works. The dormer is a nice feature that again shows the red slate that Stevens had a penchant for. The small second-floor window at the right is most likely a bathroom given the vent stack on the roof above. A nod to function but the rhythm of the windows are thrown off.

151 Vaughan Street is listed as a single-family home. Condition is excellent.