Built in 1859 for William Goodwin

Latin, redux (from the verb reducere, meaning “to lead back”)

The original image from 2015

If you think you’ve seen this one before, you are correct. We originally visited 75 Vaughan, oddly listed as 18 Bowdoin Street on the tax rolls, in July of 2015. The images were dark, the text was lacking in historic information, and the feel was a bit too ‘snarky’. When Amy Morton, who grew up here, made a great comment in early January, I felt a revisit and refreshing of the imagery was in order.

The land for 75 Vaughan was purchased from Ezra Carter for $1200.00 in August of 1859. Carter was a merchant who had purchased it from Thomas Chadwick. Chadwick bought it as part of the estate of a Revolutionary War veteran and mail rider named Josiah Paine.

William Augustus Goodwin was born to James and Hannah Goodwin in Starks Maine on July 22, 1822. William was a civil engineer. He married a Linda “K”, no full last name is recorded, in Portland in 1853. She bore 2 sons before dying of tuberculosis in 1861. In 1863, he married a widow named Ann Palmer Ward by which time he had sold our subject and moved to Mass. The Goodwins moved back to Portland when William became the city engineer. He was the lead in creating the city maps of 1882. The purchaser of 75 Vaughan was a hat dealer named John P Shaw. In 1866, Shaw sold to John Bundy Brown. Brown gifted it to his recently married daughter, Ellen Greely Clifford, in 1868.

Ellen Greely Brown was the youngest of John & Matilda Brown’s 5 children and was born in 1841. She married William Henry Clifford in 1866. Clifford was the son of Nathan & Hannah Clifford. He was born in Newfield in 1838. Nathan was a Supreme Court Justice for over 20 years. He also served as minister to Mexico when William was young. William attended North Yarmouth Academy and graduated with a degree in law from Dartmouth College. He studied law in Portland under George Foster Shepley and then under another former Supreme Court Justice, Benjamin R Curtis of Boston. William Clifford was admitted to the Maine Bar in 1861 and set up an office in Portland that same year.

William and Ellen Clifford had 6 children, one dying in infancy and one at age 9, in the 16 years they lived on the corner of Vaughan and Bowdoin Streets. In 1884, they sold the property and moved into the house at 113 Vaughan that had belonged to Ellen’s uncle, John Marshall Brown. They lived out their lives there with William dying in 1901 and Ellen in 1904. The new owner of 75 Vaughan was another attorney named Edward Woodman. 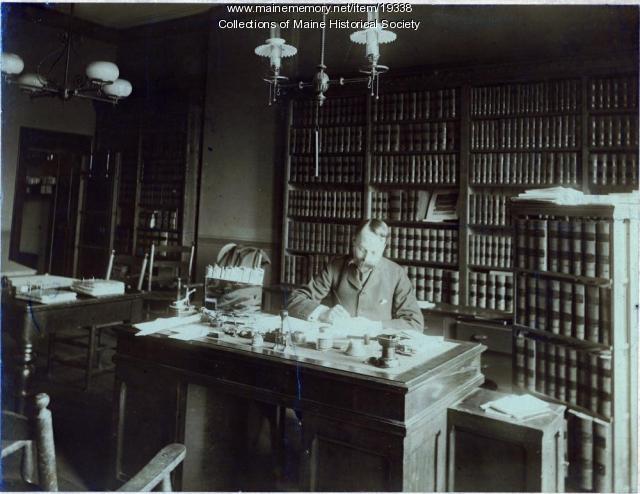 Edward Woodman was born in Wisconsin in 1855. His father and mother were both from Maine and had gone west to make a fortune in timber. Cyrus Woodman was an attorney who was successful in timber and, in 1863, moved his family to Cambridge where he continued to be involved in timber and other western developments while researching and writing several historical books. His home in Cambridge is now a part of the Harvard University Campus. Edward graduated from Harvard in 1881 and was accepted into the Maine Bar the same year.

In late 1883, Edward Woodman married Caroline “Carrie’ Bowers. The 26-year-old daughter of a photographer from Lynn Mass named Wilder Bowers. In July of the following year, Hannah Woodman was born in Portland. In 1885, Paul was born in 1885, and Edward Jr. in 1888. In 1913, tragedy struck the family when Edward Jr. contracted scarlet fever while at school in Mass. he died on the 20th of January at the age of 24. 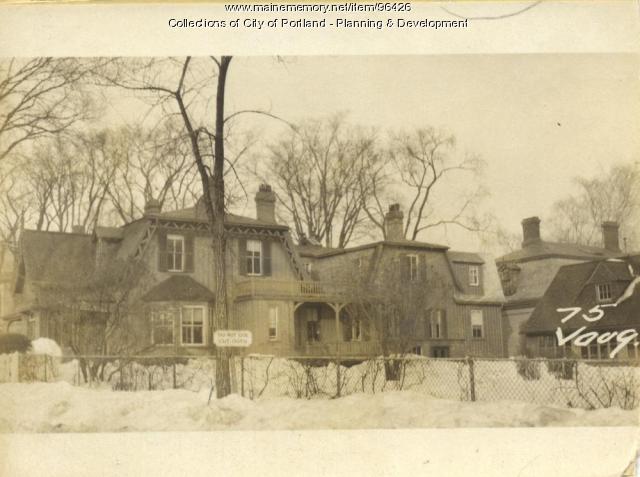 Caroline Woodman died in 1929. The following year, Edward and Paul transferred their shares of 75 Vaughan Street to Hannah. Paul died in 1930 and Edward in 1939. Hannah lived here until her death in 1973 at the age of 89 having known no other home.

75 Vaughan Street is a single-family home. The condition is very good.