Built ‘on spec’ in 1864 by Granville and Sewall Chase. Design by Thomas Cummings?

A stylish Italianate in the West End

Once again, we find ourselves on Carleton Street looking at a house built by the Chase brothers although this time it’s Sewall & Granville with no mention of Edward. We are also looking at a much higher style home than we saw at 77-79 Carleton. More on that last observation later.

The building is some 47′ wide by 45′ deep. The ells are 17′ wide and 28′ deep. There are 2 full stories with a third in the garret. The massing of the main facade is very tight with the wall to window balance being skewed to the latter and an overall emphasis on verticality.

Granville Chase was born to Timothy and Lucy Chase in Paris Maine in 1828. He was the last of the couple’s 7 children. He came to Portland around 1849 or 50 as he first appears in the 1850 census when he was living on Brackett Street with Edward. He married Eliza Morse, also of Paris, in 1856. They had 3 daughters, Georgietta, Sarah, & Mary. They lived on Brackett Street and Granville followed the family trade of brick masonry.

That second step looks to be a bit of a trip hazard.

I noted earlier that the building is, from a stylistic standpoint, much more involved than the previous works of the Chase brothers that we have seen. Part of this difference is, no doubt, a statement of the times and what was popular. As 50-52 Carleton was built ‘on spec’, it would have been important to be executed in the latest style. It is here that we get to design attribution. I think the overall integrity and cohesiveness of the design speaks to there being a professional involved. There were very few architects practicing in Portland in 1864. Charles Alexander had left under a cloud of scandal the previous year and Francis Fassett wouldn’t arrive until late 1865. The only possible candidate, IMO, would be Thomas Cummings. The spiral motif of the portico columns and the engaged colonettes on the bays is a feature seen in other works attributed to Mr. Cummings.

14 months after purchasing the land for 50-52 Carleton Street, Granville & Sewall Chase sold #52 to a merchant named John G Warren. Warren paid $6375.00 for the property. Granville and his family moved into #50 and lived there until 1871 when Hosea Kendall purchased it for $7000.00. Most, if not all, of the appreciation in value compared to #52 can be directly attributed to the Great Fire and its destruction of over 1000 homes in 1866. Granville Chase died in February of 1873 while in Fall River Mass. He was just over 46 years old.

The barn appears to be original.

John Gordon and Mary Polleys Warren were married in Portland in 1839. John was born in 1816 and Mary in 1821. John was, as noted, a merchant and grocer. They had 3 children one of whom died in infancy. They didn’t stay in our subject long. In 1866, they sold it to Eliza M Varney. She was the 35-year-old wife of Isaac Varney, a 47-year-old master mariner. They had no children but her mother Hannah and brother Francis lived with them. Eliza owned 52 Carleton Street until 1872 when she sold it and the family moved to Boston.

In 1872, a pair of widowed sisters named Harriet Sadler and Olivia Frunk purchased 52 Carleton Street from Eliza Varney for $8000. Harriet and Olivia were siblings of Francis O J Smith. They had married a Universalist minister and a physician respectively in the 1830s. After both husbands died young, they lived with Francis for a while before purchasing our subject. Olivia died in 1876 and Harriet in 1889. Harriet’s will was significant enough to warrant several column inches in the November 5 morning edition of the Portland Daily Press.

When Harriet Sadler’s estate was settled and 52 Carleton Street was sold in 1892, the purchaser was a Polish emigre and clothier named Joseph Wolf. Wolf had a store at 184 Middle Street where Blanche + Mimi is now located. Joseph and Annie Wolf lived here until 1896 when they sold to a flour dealer named Edwin Nickerson. Edwin was born in Swanville in 1861 and married Clara Belle Ferguson, born in 1863, in 1884. They had 2 children and lived here until 1928.

Hosea Kendall, who purchased #50 Carleton Street in 1871, was Ammi Whitney’s partner in Kendall & Whitney. He was born in Asby MA in 1812. He married Lydia Taylor, also of Ashby, in 1836. Kendall sold in 1874. The buyer was a flour and dairy dealer named George Libby Hodgdon. Hodgdon was born on a farm in Benton Maine in 1835. He married Grace Lockart, a 25-year-old native of Nova Scotia, in 1860. They had 2 daughters one of whom died in infancy.

George and Grace Hodgdon lived in # 50 Carleton Street until early 1889 when, on the same day, George transferred it to his uncle Elbridge who then transferred it to an attorney named George Libby. Libby had married Rosina McNally, the daughter of Elbridge & George’s sister, in 1874. In 1896 George and Rosina’s eldest daughter, Priscilla married Albert, the eldest son of Aurelis Hinds.  The Libby’s sold our subject in 1902. The buyer was Edith King, She was the wife of Helo King who was an assistant-purchaser for Berlin Mills. The Kings had 2 daughters and a son. They lived here through Edith’s death in 1920 and Helo’s in 1926. In 1928, the children sold it to Winnifred Dalton. 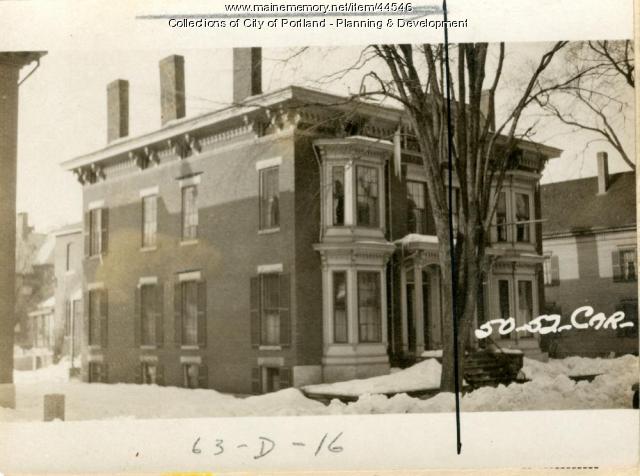 Mamie Winnifred Milliken and Edward Tukey Dalton were married in 1897. Their daughter, Hazel, was born the following year. Edward worked in various retail outlets as a salesman before dying in 1928 at the age of 49. The Daltons may have had an inkling of Edward’s demise as the purchase of 50 Carleton Street happened some 2 months before his death. Winnifred lived here until her death in 1954. Along the way, she rented the upper floor to a salesman/manager of a hardware store named Enoch Higgins and his wife Marcia. After Winnifred’s death, Hazel, then married and living in Milton Mass, sold the home to the assistant manager of the Maine Central Railroad office on St John Street named Willard Pierce and his wife Sylvia. They were originally from Bucksport and moved to Portland after the war. After Sylvia died in 1977, Willard sold the property and moved back to Bucksport.

50 Carleton Street is a single-family residence. The owners are a financial advisor and his wife.
52 Carletonis a 5-10 family apartment building. The owner is a real estate agent.
Condition of both units is very good.