A unique Greek Revival in the Woodford’s Corner neighborhood

Christopher Wilson was inspired. The source of that inspiration is not clear but he sure got the idea to build a different house. Here on a plot that initially ran from Deering Avenue, then the ‘Back Cove Road’, to above the train tracks behind the barn, Wilson created a Greek ‘Temple’ that is both naive and worldly. What makes it more interesting is Mr. Wilson was neither an architect nor a joiner by trade. Wilson was a farmer. But, let’s not spend too much time here as he sold the house almost as soon as it was finished.

The main block of the house measures 26′ on the street sides and is 34′ long. The ell facing Prospect Street is 16′ deep and stretches a full 53′ to the wall of the barn. It has 2 stories and an attic. The detailing of the Prospect Street facade and the ell is straightforward with claps and simple molded window and door trims. It is the main block that calls our attention.

In November of 1844, Christopher Wilson sold 102 Ashmont Street to a farmer named James S Knowles. Knowles lived, and farmed, farther north on what is now Ocean Avenue near Nathan Sawyer. He sold it to Ammi Sweetser in 1846. Sweetser listed his occupation as ‘broker’ in 1850 by which time he had sold our subject to a farmer from Wilton named Joseph Additon. Jospeh transferred it to his son Lloyd that same year. In 1850 Lloyd Additon sold our subject to Nathan Mayhew, a 45-year-old Portland provisions dealer originally from Bath.

The main block is a study in ‘Carpenter Greek Revival’ style. The flat wall is overlayed with battens arranged symmetrically but for those at either side of the windows. At the corners, a series of moldings work to create a pilaster supporting a complete entablature. In that entablature is set a series of rectangular windows surrounded by carved garland wreathes. The pediment is closed and molded in the Greek Revival mode. Placed in the pediment is a 6 over 6 rectangular window that is capped with a Gothic arched molding that may have held a window originally. It definitely had shutters as can be seen in the 1924 tax photo.

Nathan Mayhew may have been the first owner to live in the house at 102 Ashmont Street. The 1850 census shows him in Westbrook but where is an open question. He didn’t stay long for in 1854 a grocer from Portland named Franklin Crawford purchased it. The Crawfords may have lived here as there is an “F Crawford” shown on the Chace map of 1857 and, when Craford sold to Jonathan Fogg in 1859, his residence was listed as Westbrook. This is inconclusive as the map doesn’t show “F Crawford” where he should be relative to “C Rackliff” as the Rackliff property was next to our subject on the north.

Detail of the 1857 Chace Map of Cumberland County. Library of Congress

1850 was the year the trains came to Ashmont Street. The York and Cumberland County Railroad had been chartered in 1846 with the intent of building a line from Portland to Berwick. As was often the case with these early lines, there was much more ambition and hyperbole than money or common sense in the supporters of the York & Cumberland. They would go back to the legislature in 1848 to get the charter amended to allow for the stock in the company to be valued at a lower rate in the hopes of attracting investors. When that failed, they resorted to some questionable contracts being signed with the builder of the line. These contracts would result in lawsuits that reached the US Supreme Court. In 1850, the line was opened to the Saco River and a few years later it was opened to Berwick where it crossed the Piscataqua River to join other lines in New Hampshire

Map of the York & Cumberland County Railroad. From ‘The Rise and Fall of the York and Cumberland Railroad by William Curtis Pierce. Maine History 1.1.1976. Portland Public Library Digital Commons

Jonathan Fogg grew up on a farm in Scarborough and spent his life farming. He married Phebe Babb in 1838 and they had a son, Arthur, in 1842. Interestingly, Jonathan’s maternal grandfather and Phebe’s paternal grandmother were siblings. Census records would indicate that the Foggs lived in Scarborough until 1878 or 79 as the 1879 city directory lists them in Woodfords and when the property was sold after Phebe’s death in 1887, Jonathan having died in 1880, her last residence was Deering. The purchaser was a Mary Carter of Scarborough. 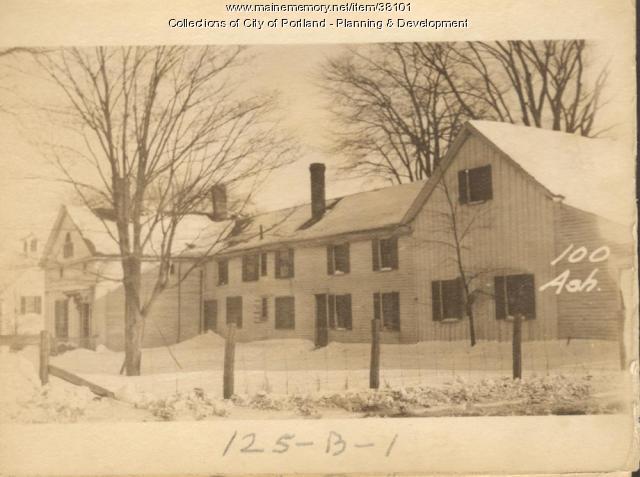 The tax photo of 1924 shows the barn to have had a board and batten siding similar to the main block of the house. At some point it was replaced with the current cedar shakes. The fact that the board and batten siding of the main block of the house only covers 2 facades is interesting. It would seem that the extra work needed to layout and build the wall treatment was deemed cost prohibitive on for all but the primary facades. But the entablature and wreathed windows was carried on all 4 sides.

Freedom Carter and Mary Leighton were Scarborough natives who married in 1876; They had 3 children while farming in Scarborough. What brought them here is not noted. The city directory for 1896 lists Freedom as a farmer in Woodfords. The 1900 census noted Freedom was a day laborer. He died in 1901. Mary lived on at 102 Ashmont through 1911, the last time she appears in a city directory. She had sold the property to Eva Moulton of Scarborough in 1907.

Eva and Frederic Moulton never lived in our subject. They farmed in Scarborough until moving to Falmouth where they continued to farm. They owned our subject until 1946 when their children sold it to a baker for what is now the Westin Hotel in Congress Square named Philip Welsch and his wife Delphine. The Welsch’s had been living here since 1933. They would remain here through Philips death in 1970 and on until 1987 when Delphine sold to Patricia & James Lawler. The deed for this sale listed the Lawlers as living at 102 Ashmont. Patricia and James Lawler stayed at 102 Ashmont Street for a few years but by the time they sold it in 1992 the new owners, Jon Hall and Barbara Lowenberg, gave their address as 102 Ashmont.

102 Ashmont Street is a single-family home. The condition is good. The owners are a community alliance director and the founder of a media website.