A substantial Colonial Revival home in the Boulevard Park neighborhood.

Seth probably walked to work. Having grown up as the grandson of the John T Winslow, it was to some extent predestined that, in time, Seth Francis Clark would join the family firm of the Portland Stoneware Company, formerly the Winslow & Co Pottery Works.
Seth was born to Isaac and Julia Clark in 1865. The 1870 census listed Isaac as a potter so we can surmise that he was in the employ of his in-law’s firm. Isaac married Julia Conner Winslow, the daughter of John T Winslow, in 1864. 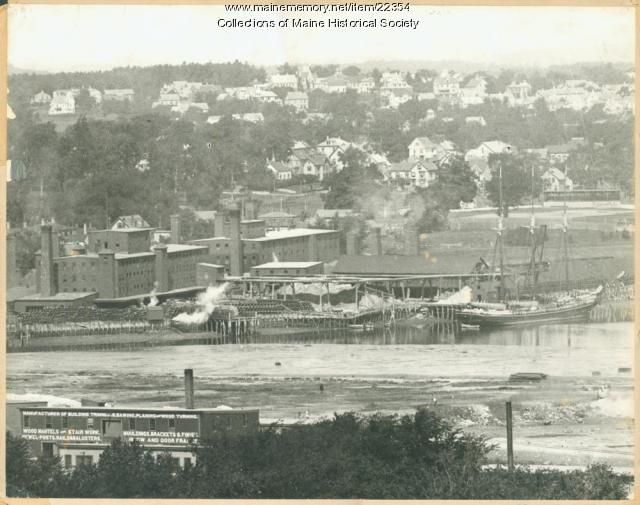 John T Winslow’s family had been in the neighborhood for a few decades before his name shows up in the historical record. He ran a grocery store on the Westbrook side of Deering’s Bridge in the mid 1840’s. The Portland City Directory of 1847-48 noted that his inventory had been “nearly destroyed by fire, and the store somewhat injured.” on the night of May 29, 1847. In September of the same year, John became partners with Levi Clough and William Calhoun in “Clough, Calhoun, & Co. A notice printed in the January 24, 1848 issue of the Portland Tri-Weekly Argus noted the company had set up on the north side of Deering’s Bridge with a new kiln and

25 Belmeade Road measures 42 feet to the street. The Deerfield Road side, seen above, is 30 feet long whereas its opposite, facing 31 Belmeade, is 33 feet long. It is 2 stories with an unfinished attic. The style is mostly Colonial Revival in the massing and trim with the windows and siding leaning towards the Shingle or Mission Styles. The porches are much the same as the home was built. The house is on a laid stone foundation a nod to the newer styles. 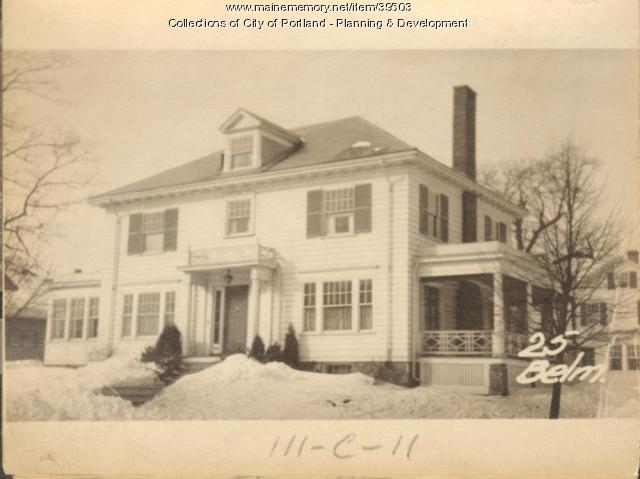 By 1850, John Winslow had gained complete ownership of the pottery works and renamed it Winslow and Company. He expanded greatly and later renamed the works the Portland Stoneware Company but it would always be owned by the Winslow Company. The Winslow and Clark families ran the firm until 1970 when the Portland site was taken by the Federal Government for the construction of Interstate 295. The firms Cambridge Mass facility was purchased by the sales manager at the time and is still operating to this day in Dracut Mass.

Amanda Davis was born in Boothbay in 1880. Her father was a fisherman. Amanda and Seth married in 1906 when Seth was 40 and Amanda 26. They had a son, John Tolman Clark, in 1915. He died in 1949. Seth didn’t work for the family firm immediately. He was a travelling salesman for a Boston drug firm for a few years before becoming an appraiser at the Customs House for a couple more. He then was the city parks commissioner and manager of the Casco Bay Lines before joining Winslow and Company as a sales manager in 1924. He became general manager of the firm in 1939 and remained in that role until 1949 or 1950 when he left the firm due to failing health. Seth Clark died in 1951

The entry portal and window treatment above it is the primary reasons I think Fred Tompson designed 25 Belmeade Road. It has a certain ‘bigness’ that characterizes much of his residential work. The Colonial swag over the Arts and Crafts window on the 2nd floor is a nice flourish.

Amanda Clark lived at 25 Belmeade Road until 1963 when she sold it and moved to Yarmouth where she died in 1971. The purchaser in 1963 was a company called Bellis Inc which, according to the deed, was based in Portland. Amanda granted a mortgage for $3900.00 to Bellis Inc and that document lists the company and one Arthur Waterman as mortgagees. Waterman was president or treasurer of a couple of auto dealerships on Forest Avenue and the vice-president of the Jewish Home for the Aged on Munjoy Hill. Arthur and Frances Waterman lived next door at 31 Belmeade. 25 Belmeade was rented until 1971 when Bellis sold it to Jeanne and William Gallo. They lived here until 1979.

25 Belmeade Road is listed as a single-family residence. Condition is very good.