A remuddled Italianate in the West End neighborhood

They’ve been here. The vinyl siding guys. Sometime in the last 3 or 4 decades, they flew through and left their calling card. A surface devoid of detail and non-existent window casings.  But, it was worse than just the vinyl.

William Hartwell Milliken was born in Farmington Falls in 1836. His father, Jotham, was an innkeeper whose establishment was used for quarterly sessions of the probate court. Jotham’s father, Edward Milliken, was an innkeeper in Scarborough. His inn, on the Scarborough/Saco line, is a local landmark. William did not follow the family path into innkeeping, In 1857 he moved to Portland and worked as a clerk and boarded with another clerk named Charles Richardson and his family on Fore Street. On October 30 of 1859, William and Mary Althea Hillman, also a native of Farmington Falls, were wed in Boston.

The main block of the house is 22′ on the street and is 31′ feet deep. It is two stories with a third in the garrett. There is a two-story ell measuring 15′ x 20′ off the right rear of the main block. Details are few but for the brackets, arched hood over the attic window, and a rope molding on the entablature. The entry doors are 19th century and may be original.  The bay is a simple affair with squared corners, dentils, and brackets.

Detail of the rope molding. The kind of work James Tenney would have done.

William Milliken went from clerking to dealing in flour to becoming a commission merchant. Along the way, he and Mary had 3 daughters, Mabel, Laura, and Mary, and a son, William Jr. In 1884 William partnered with John Wilson and Warren Chase for Wison, Chase and Milliken. In 1886 the firm declared insolvency. The firm was closed and liquidated and the three partners’ properties were put up for sale to meet debts. 33 Cushman and the lot adjoining were purchased for $35.00 by Olive Jones in January of 1887. She deeded them back to Mary in 1893.

Wilson, Chase and Milliken listing in the 1885 city directory. Ancestry.com

Advertisement for sale of the homes of Wilson, Chase and Milliken in the October 8,1886 Portland Daily Press. Library of Congress.

After the collapse of the firm. William worked as a commission merchant for a while. He then became the agent for the Warren Fire Bucket Company. By 1900 he was working as a wholesale flour merchant.  William died in 1902 and was buried in Mount Pleasant Cemetery in South Portland. Mary, Laura, and the younger Mary lived on at 343 Cushman.  Mable had married a farmer named James Breck in 1896. In 1910 Mary transferred 33 Cushman Street to Laura and the younger Mary. Mary Hillman Milliken died in 1916. Laura and Mary continued to live here until 1926 when Laura died. Mary then moved to Old Town to live with William and his family. 33 Cushman sat vacant until 1932.

As mentioned, the vinyl siding and its accompanying ills were not the most egregious acts of remuddling performed on 33 Cushman Street. The tax photo of 1924, zoomed below, shows an ornate 3 part window with rounded tops and ornate hoods with matching details on the other windows on the second floor. This is all gone. The 3 part arrangement and basic sizing are there but one would never know what was there without seeing the earlier photo. Gone too are the wider corner boards.

Detail of original windows and trim from the 1924 tax photo.

In 1932, Agnes Wadleigh purchased 33 Cushman Street from Mary Milliken. Oddly, there is no record of any will or probate for Mary Milliken the elder on her death in 1916. Nor is there one for Laura in 1926. Lastly, the registry of deeds has no record of Mabel transferring her share, assuming she received one, of the property to Mary although Mabel didn’t die until 1944.

33 Cushman Street on the 1914 Richardson Atlas.

Mary/Maria Agnes Haley was born in Boston in 1893. Her father, Bartholemew, was a crew foreman for the Boston Street Department. In 1919 she married a real estate agent who was originally from Maine named William Wadleigh. William was 24 years older than Mary Agnes. Their first son Allen was born in 1919. Hmmm. A second son, G. Coolidge, was born in 1924. In 1944, the Wadleighs sold 33 Cushman Street to an Optician named Frederic Christensen and his wife Grace. 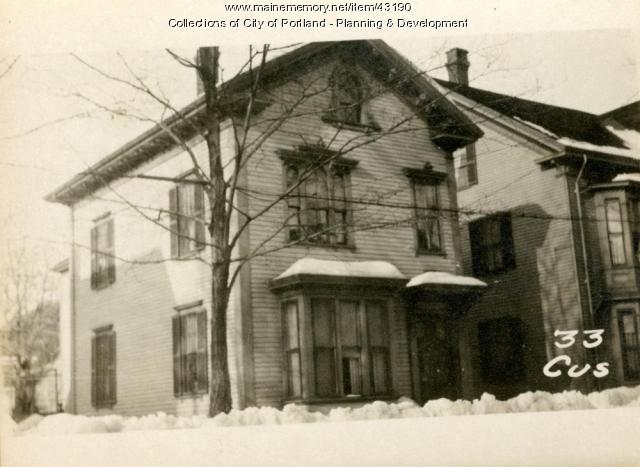 Fred and Grace Christensen were Massachusetts natives. Fred was born in 1882 and Grace in 1884. Fred worked for the Colonial Optical Company which was located on the 4th floor of the Congress Building on the corner of Congress & High Streets. They had 2 sons and a daughter although all had grown up and moved on by the time the Christensens purchased 33 Cushman Street. They lived here until 1952 when it was purchased by Patrick & Nora Delaney.

Patrick J Delaney was born in Portland in 1910. His father Stephen was a Portland native who worked as a freight handler for the railroads. Hannah Delaney was a native of Ireland who had arrived in the US in 1895. Patrick grew up on Salem Street in the West End. Nora Chisholm Delaney was born in Portland in 1900. Her father, John, was a coal and wood dealer. The Chisholms lived on Lancaster Street. Patrick was a warehouseman for the First National Stores warehouse on Read Street. The Delaneys married in 1936. They had a daughter, Patricia, and 2 sons, Thomas and Joseph. The Delaneys sold 33 Cushman Street in 1958.

Millard and Grace Leighton purchased our subject from Patrick and Nora Delaney in 1958. I am not convinced the Leightons lived here as the city directories for the period show the property as vacant. Millard was a wholesale lumber salesman. They sold the property in 1967. The purchasers were a retired couple named Glenn and Hazel Smith. They sold it the next year to John and Phyllis True. The True family owned the property until 1983.

33 Cushman Street is listed as a single-family home. Condition is very good.