A lovely Colonial Revival in the Coyle Park neighborhood.

When Joseph and Eliza Clark moved into our subject in 1903, it was a quiet spot away from the hustle and bustle of the waterfront where Joseph had made his living as a ship-master. Joseph and Eliza both came from sea-faring families. They were from Pembroke Maine on Cobscook Bay. Also from Pembroke was Jacob Winslow, who was their son-in-law, and it was to sail for Jacob that led the Clarks to move to Portland in the  1880s. Joseph would have been 75 when their son Eleazer purchased the newly built home in 1902.

When Eleazer Clark bought 40 Belmont Street from Lewellyn Morse Leighton in 1902, his deed had all the same restrictions that Lincoln Jewetts’ including:

And several others. The house was finished with many modern items as seen from the advertisement above. These included:

There were 6 bedrooms (chambers) over 2 floors with a library on the second. The front parlor sported a fireplace with seats built into either side. The lot on which the house sits was 52′ wide by 100′ but the Clarks purchased 2 more lots on the Forest Avenue side making the property 152′ wide by 100′ deep.

The house is 28′ wide and 41′ deep, with a 10′ x 17′ extension off the right rear. The extension is matched with an enclosed porch at the left rear. The porch on the front originally wrapped around the entire facade and extended down the right side to the chimney. Much of this has been removed since 1924 along with dormers on the front and right sides. 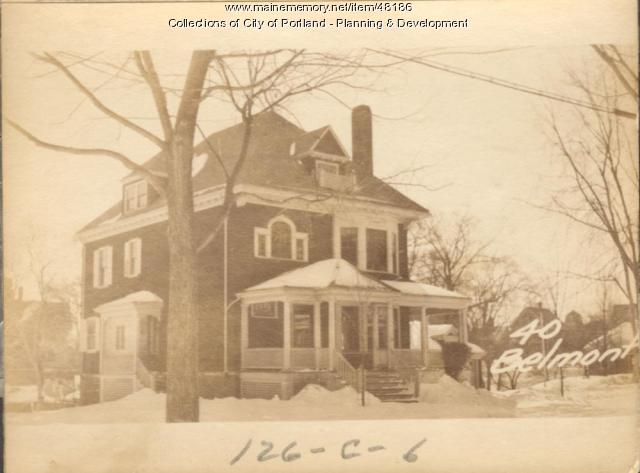 Joseph Clark had very little time to enjoy his new home. He died in August of 1905 of kidney disease. Eliza continued on at 40 Belmont Street. Her niece, Blanche Wentworth, moved in. She worked as a private nurse. Also living with Eliza was a 23-year-old woman named Laura King who was from New Brunswick and worked as a servant. Eliza died in 1917 at the age of 87. The following year, Eleazer sold 40 Belmont Street to a wholesale grain dealer named Ralph Morrill. Morrill operated out of space rented in the building at 198-200 Commercial Street on Central Wharf. He had married a Canadian immigrant named Annie Devine in 1913. They had a son, Robert, in 1914. The Morrills lived here until 1945 when Annie sold it to a Goldie Pachowsky from Waterville.

Fred Tompsons domestic work was usually quite good. Here on Belmont Street, something doesn’t seem right. There is an overall lack of cohesiveness in the design. Some of the windows, mainly the round one on the northeast wall, seem to have no purpose. The modillions on the main facade are too small and, even with the contrasting color, are lost in the deeply projecting cornice. The Palladian window on the second floor is a nice touch and is well balanced in the wall, but the proportions are too low and ‘fat’ to be comfortable.

Goldie Modes Pachowky was born in Portland in 1912. She was the youngest of Harry and Florence Modes’ 6 children. The 2 eldest daughters, Rachel and Alice, were born in their parent’s native Russia prior to 1905 when the family moved to England where Samuel, Lillian, & Catherine Modes were born. In 1909 the family emigrated to the US.  They lived on Deer Street prior to purchasing a home on Lancaster Street in 1917.  Goldie married Myer Pachowsky of Waterville in 1936. Myer was a year older than Goldie and, like her, was the Maine-born child of Russian immigrants. He ran a smoke shop in Waterville and the couple rented a house on Main Street.

The tall chimney is particularly striking.

How does a Syrian immigré get the last name “Dyer”? Spero Dyer’s father and mother, Peter and Mary, were born in Syria around 1870. They came to the US in 1906. They had 8 children between 1907 and 1924. The son, Spiro or Spero, was born in 1914. He and his wife Verlie purchased our subject in 1955. As for Peter and Mary, their names may be a clue. Many of the Syrian immigrants to the US prior to WWI were Christians fleeing increased pressures from the Ottoman Turks who controlled the country. “Peter” & “Mary” are about as Christian as one could get for first names. It could be they chose new names upon arrival to mark a new life and better ‘fit in’ with the local population. Dyer certainly was a common name in the area at the time. Spero and Verlie sold 40 Belmont Street in 1957.

The Dyers sold 40 Belmont Street to a couple from Scarborough named Coffin in June of 1957. The Coffins sold it in December of the same year. The purchasers at that time were Eugene and Eva Glickstein. Eugene was the executive director and Eva was the head matron of the Jewish Home for the Aged on North Street. The home became the Cedars in the 1990s. The Glicksteins lived in our subject until Eugene died in 1977. Eva sold it the same year.

40 Belmont Street is listed as a single-family residence. Condition is excellent.