A charming Queen Anne in the West End Historic District

He was the first born and, in his homes anyway, the least ostentatious of the ‘Hinds’ Boys’ Albert Henry Hinds was born to Aurelius & Ellen Hinds in December of 1874. He married Grace Libby of Deering in 1896. Their daughter Margaret was born the following year. 5 more children were born to the couple by 1917. Albert and Grace purchased the land for 100 and 94 Neal Streets from the Estate of John Bundy Brown in early 1898. A permit for the house was issued in April of the same year.

100 Neal Street measures 32′ to the street and is about 50′ deep. it is a full three stories. Stevens had moved decidedly towards the Shingle Style by 1898 and that move can be seen in the prominent gable and the way the roof acts like a blanket covering the various forms and tying them into one mass. The masonry is laid in a running bond with very tight joints filled with a color-matched mortar. The window openings are without trim. The first-floor windows have Colonial Revival lintels of brick while the second-floor units have wooden lintels. 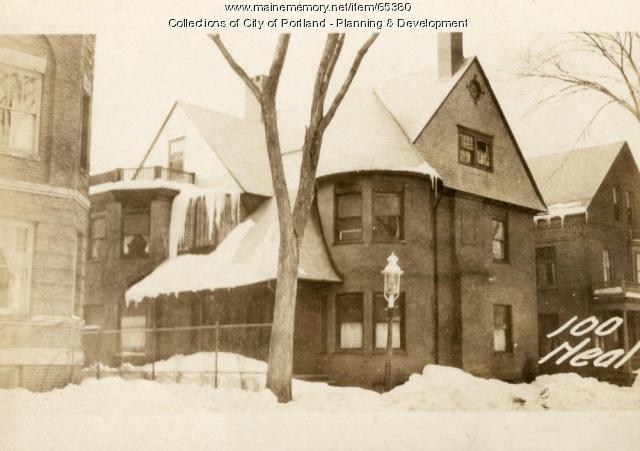 100 Neal Street was completed by June of 1900 when one Scott Simpson visited the Hinds family to count them for the census of that year. Along with 2 children, Millicent Sellick, a 20-year-old recent arrival from Canada, lived with the family as a servant. Albert stated he was a ‘stenographer’ for the family drug company. When Harold Clark came around for the 1910 census, the Hinds family had grown and had 2 live-in servants. A 21-year-old Irish woman named Annie Greene and a 25-year-old Canadian woman named Vina Vail.

The position of the projecting window and the tall window behind it leads me to think the main stairway is located in that area. Also of note is the clean, unbroken surface of the wall with no projecting lines other than a simple water table. Here Stevens is alluding to the concept of the exterior wall surface being a ‘skin’ over the various forms of the building. This concept was an element of the Shingle Style.

The Hinds family lived at 100 Neal Street until 1921 when they sold the property and purchased the house on the North-West corner of Vaughan and Bowdoin Streets from Richard Webb. This was another Stevens design and put the family closer to other members on Chadwick Street. The purchasers of our subject were Maurice & Mildred Markson. The Markson family ran a furniture and clothing store on the corner of Brown and Congress Streets. 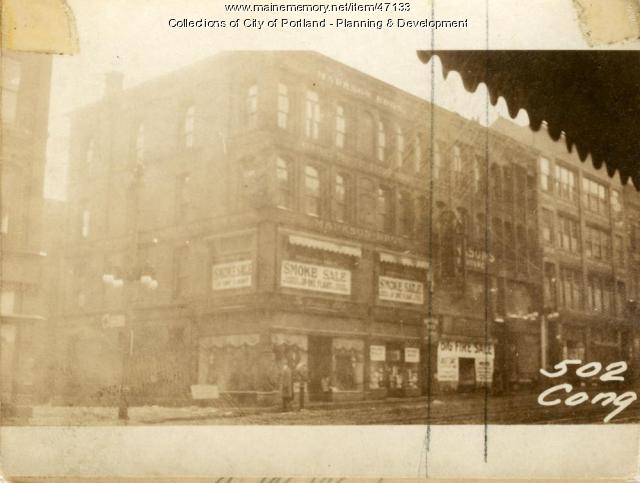 Maurice and Mildred Markson were Russian/Polish Jews who had come to the US in 1881 and 1895 respectively. They lived in Mass, where their son and daughter were born, for some time before coming to Portland. Maurice’s brothers Edgar and Nathan ran the business with him. in 1928, the Marksons sold 100 neal Street, along with several other properties in the neighborhood, to Priscilla K Thaxter.

Priscilla Kimball was born in Bath in 1895. She married Arthur Robinson in Portland in 1921. Arthur died in 1924. She married Dr. Langdon Thaxter in 1925. Langdon’s brother was Sidney St. Felix Thaxter. Priscilla had given birth to a daughter when she was married to Arthur Robinson. Langdon adopted her and the couple had 4 more children. They lived here until 1944 when they sold all of the properties Priscilla had purchased in 1928 to the Episcopal Diocese of Portland. The Thaxters moved to a house on Spring Street that is now part of Waynflete School.

The garage or carriage house is a structure worthy of our attention on its own. Although it carries some of the design cues from the house, it is much more ‘modern’ in the arrangement of the windows. Especially the window band above the door. Capped by a simple hipped roof with a ventilation cupola at the peak. it is a little gem.

The glass-enclosed space above the porch looks inviting. The 1924 tax photo shows it to have been something of an ice dam issue.

The Episcopal Diocese held 100 Neal Street until late 1945 when it was sold to Josiah and Ann Drummond. The Drummonds were newly married. Josiah was an attorney. They raised 5 children here and stayed until 1976.

100 Neal Street is listed as a single family home. The condition is very good.